If you’ve missed my reviews of the original American Netflix version, here are my reviews: 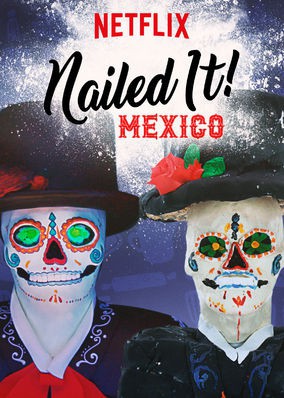 After the massive success of Nailed It! on Netflix Original series that has gone through 2 seasons, brought in a special Queer Eye episode and then a holidays version, it has now expanded internationally with its first stop with Nailed It! Mexico. I’m always a big supporter of Netflix working around its own Netflix’s international grab and expanding its show, just like how it did the international cooking show, The Final Table or obstacles competition, Ultimate Beastmaster, which proves that its a foundation that has endless possibilities and a way to truly expose the world to different cultures and well, just each other. Plus, Nailed It! is a great idea because it breaks out from the professional version of things and takes a more relaxed and amateur approach to things while still keeping itself educational. 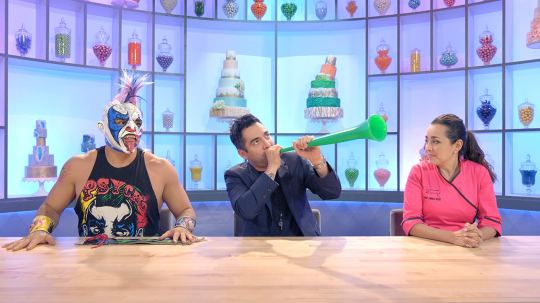 Nailed It! Mexico honestly was a lot of the same as Nailed It! for USA. That is a good and bad thing. The good is that it keeps a certain type of humor and joke that runs throughout. It makes it more united and keeps it fun to watch. It uses Nailed It! signatures, like the golden hat for the winner of the first round or the same trophy design. However, going international as I mentioned gives a look at culture and while pop culture and its guests go hand in hand to expose some of their talents there in the baking and celebrity and/or foodie world, the baking designs are also with Mexican culture and themes for example something as simple as incorporation a pinata or the quinceanera. What also works here is that the first episode sets up the Mexican version to be on a higher baking knowledge especially looking at the same structure but more seemingly complicated desserts and designs.

There are a few “bad” things here. The bad is that it lacks a uniqueness other than location and language to give Mexico’s version its own distinction. Its something that is important to for someone like myself who watches all of it.  It likes reusing the bits like having those funky buttons like having Omar Chaparro take over the nagging duties and inviting Sylvia Weinstock as a foreign guest to link the two together while doing her little “stealing” things from the pantry bit and her witty remarks; also the trophy never being there for the announcement and reappearing from weird spots, etc. This all works well enough except when doing something like that, it becomes Nailed It signatures and yet, its easily going to be compared with its US original, which has an upperhand (in my opinion, because of Nicole Byers having that charisma she brings to the show).

With all that said, looking at both sides, Nailed It Mexico is a lot of the same, but that isn’t a bad thing because I had the same criticism about the second one going into an odd direction which didn’t work. In comparison, the complexity and different humor might sometimes get lost in translation however, the entertainment of Nailed It has always been looking at the funny failures (and learning from them) and with that, the Mexican version still delivers in spades.

You can see reviews for the main seasons here:

There are shows that talk about refined baking competitions and such but there is also a great joy in watching amateurs bake because its a learning curve and everyone has to start somewhere. Nailed It! has taken that concept and really excelled with it. Sure, Season 2 had its odd moments where it forgot what it was trying to do but overall, it still brought a lot of joy and laughter to some of the odd baking things that came out of some of these episodes. With that said, I was excited to see that Nailed It Holiday is now a thing. It keeps the same format, very much like the first one which focuses its first round on Baker’s Choice and its making smaller baking things like cookies, cake pops and cupcakes while its second round is the money maker, literally, because you can win $10,000 with  making a cake creation. This time we also see a hint of what might be potential new extension or a new direction for the show in the 7th episode as it escapes the baking realm and jumps into the DIY crafts realm. I’ll talk about that a little later as a final wrap-up discussion point.

Nailed It! Holiday! definitely did do exactly that. Its hilarious and a ton of fun. It themes itself around the different holidays during this winter season from a good few Christmas to simply winter themes to Hanukkah and takes us straight to a countdown to New Year’s. I’m guessing if you do watch this one or two episodes a week, you might actually reach New Year’s Eve to watch the countdown. The creations themselves are super nice. Its still very much difficulty but its always the how the choice of candidates in the competition that brings a lot of fun because of just how ridiculous some times these things turn out to be. At the same time, they add on a different special button in each one episode themed also around the holidays from unwrapping presents or untangling lights which also makes it fair because if they finish it during the 3 minutes, they can get back to their baking right away. Its a nice twist to the freeze button in the second round.

Nailed It has always seemed to want to divert away from its baking competition formula. And doing the DIY crafts route is a good one for sure. It might eventually also run out of topics at some point but it has its potential also. The one episode we had was definitely just a taste or maybe a market test in their own right to see how well received it is. I thought it was a fairly fun episode. I like to do DIY crafts as well so this was right up my alley. Crafts have the potential to go horribly wrong and they can also be pretty entertaining to watch as well. I would be down to see if they do a season of this especially of Nicole Byer continues to host.

Talking about that, the reason that Nailed It works despite whatever content they have is in part all the good creative things they do and finding the right type of participants and having a good angle, like this Holiday theme mini series. But the biggest reason is Nicole Byer. She is just the heart and life of this show. While Jacques Torres is a fun match for her, the crafts episode proves that she really can have the same dynamic with another host as well. Its her personality that makes it so fun to watch. Nailed It Holiday is a really fun season and I hope that they continue with this show, whether it be in baking (which I probably would prefer as it works well) or even if they expand to crafts.