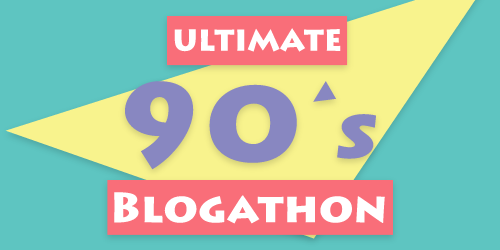 We’re officially kicking off the blogathon.  It will run for the next few weeks from Monday to Saturday both here and on my awesome co-host, Drew from Drew’s Movie Reviews. Today, we kick off together with our own reviews. We will be alternating reviews here and over there from all of our fantastic participants. A huge thanks is in order for all the reviews we’ve seen. There are some great selections to look forward to. Over the next few days, I will be creating a page on the menu for Ultimate 90s Blogathon and will update the posts as they go so if you miss any, just head over there to find it.

Let’s get this started!

I was born in the mid 80s, meaning I did most of my growing up in the 90’s. Its where I can relate the most and also why this blogathon means so much more to myself. The 90’s was filled with iconic actors and roles/characters and some great movies. My childhood wouldn’t have been the same with this actor though. Life wouldn’t have as many laughs and happiness going on in our house. Robin Williams was a great comedic actor taking on fun and inspiring roles and there are so many that it is hard to choose from. It is why I decided to choose three that meant the most to me, be it memories of spending time with my family or just movies that I can’t get enough of today. These are iconic roles that he took on. I’m sure it will differ for each of you. I know Drew and I both had different choices as well. So will you. If you are a fan, share which of his movies you loved and which would be in your Robin Williams triple feature. Now, for my choices and they are in no particular order! 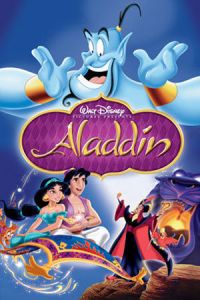 When a street urchin vies for the love of a beautiful princess, he uses a genie’s magic power to make himself off as a prince in order to marry her. – IMDB

Aladdin is a true Disney classics. It left us with not only a princess movie which it does have a male protagonist as a focus, many renowned songs including the wildly catchy Prince Ali or the uber romantic A Whole New World but also a fast talking somewhat silly genie voiced by Robin Williams. Aladdin is fun and fast-paced. It has a villain, Jafar with his goofy sidekick. The Sultan is kind of a clueless father with a pretty pure heart that really has the best intentions for his daughter, Princess Jasmine. While Jasmine is not one of my favorite princesses but she is strong-willed and I love tigers so her pet tiger Raj stole my heart. However, the showstopper is the dynamic and enthusiastic and incredibly funny Genie. Robin Williams uses his many voices to give this character life and makes him interesting to watch with a lot of fun moments.

Aladdin doesn’t only have a love story. Its more than that. It looks at greed and power. It has sneaky creatures and misguided authority. There is ignorance among some characters and only seeing and judging the physical appearance than the true nature. The dialogue itself is sharp and comedic and fun thrown in with hints of emotions as we learn out characters and how they change. The vibrant characters are not limited to their main players but even Raj and Abu, Aladdin’s pet monkey shows companionship and teamwork. Wrapped up in a fun package but still full of excitement and tells an adventurous story, Aladdin is excelled by Robin Williams but also is one of the great Disney offerings in the 90’s. 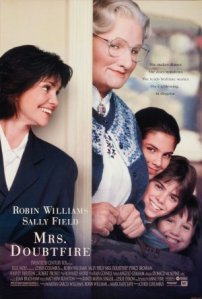 After a bitter divorce, an actor disguises himself as a female housekeeper to spend time with his children held in custody by his former wife. – IMDB

The lengths that a desperate father would go to be with his children brings a lot of great moments, both comedic and heartwarming as he transforms himself into a housekeeper. Mrs. Doubtfire is an iconic role in itself. She was a feisty housekeeper that tried to classy but also stood her own because she was actually a he. Whether is Mrs. Doubtfire dancing around cleaning the house or burning up her breasts or even throwing a fruit at the back of Pierce Brosnan’s head, it all adds to how fantastic this character is. At times, we even forget about the man under the transformation.

Stepping out of Robin Williams iconic role, a cornerstone of 90’s child actors was Mara Wilson who plays the youngest child. Mara Wilson did a few roles in the 90’s, like Mathilda and Miracle on 34th Street. She is one of those unforgettable child actors that was so cute and smart. Of course, we also had our James Bond of the 90’s, Pierce Brosnan as their mother’s new love. And mom is played by Sally Field. Lots of big well known names here. The kids are incredibly fun to watch and everyone delivers a great performance paired up with some amusing and entertaining dialogue that really touches us and tugs some heartstrings at the end. Its really hard to not love. Mrs. Doubtfire is a film that I watch over and over again and still remains as entertaining every single time. 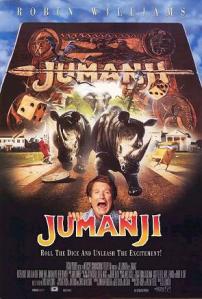 When two kids find and play a magical board game, they release a man trapped for decades in it and a host of dangers that can only be stopped by finishing the game. – IMDB

Jumanji is irreplaceable. It is adventurous and dangerous. There are scary things that can be summoned from the board game. Jumanji itself is a pretty eerie concept of having a board game that is alive on its own and has created a whole world of its own to thrive for its players. However, Jumanji is a Robin Williams favorite because he plays Alan Parish who comes back after twenty odd years of being trapped in Jumanji’s jungles and need to pick up the courage to get back into the game to finish it and hopefully reverse all the damage already done. Movies that feature someone in the past going to the present or the present going to the past will embrace changes from the sudden decade shift and usually, hilarity ensues. That is the winning formula of this movie.

Jumanji does also boast some great performances from Bonnie Hunt who plays as the girl who ran off in fear when Allan was sucked into Jumanji and has to finish the game also. Her fear and denial are the things that make her funny but we do see her character development as she finds the courage to be more. Kirsten Dunst plays the little girl, Judy who just moved into the old Parrish house with her aunt and starts the game without knowing that she is only continuing a previous game. Her brother, Peter, played by Bradley Pierce is a rather quiet character. Everyone in this movie learns to face their fears and find a deeper courage to keep going on and persevere towards your goal. There is a family theme as well. This action adventure keeps us on our toes as we watch each of them roll the dice and wonder what else can come out of this game. Even if I’ve seen it before, I still sit at the edge of my seat anxiously waiting for what happens as if I didn’t know before.

Remember to head over to Drew’s Movie Review to look at this Ultimate 90’s Blogathon Kickoff review HERE!