The light at the end of the tunnel is how I feel right now.  Its just right there! This month has been a bit intense with work and keeping up with the blog.  The first time its really gotten to me.  This time really went completely spontaneous and ended up being hectic to finish up the focus of the marathon: the Halloween series.  I had a list before I started the marathon and lets say I pretty much tossed it out the window.  Last night, at something like 11pm, I finally turned on Netflix and saw Halloween H20. I’ve mentioned it, but I will again, I’m not doing the final one due to time constraints.  I will eventually, just not immediately.  So, lets see whats up with this one! 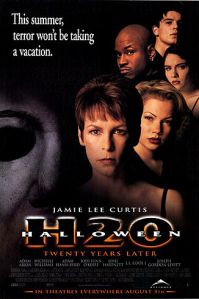 Laurie Strode, now the dean of a Northern California private school with an assumed name, must battle the Shape one last time and now the life of her own son hangs in the balance.-IMDB

The only relevance Halloween H20 had was to the very first (and well, second) Halloween.  That makes it kind of meh, because then its like, should I take in account that 4 to 6 happened then.  I mean, from what I got from the 4th one, Laurie either died or left her daughter.  So  now, she has a son, why did she choose to keep her son but leave her daughter and then her daughter gets stuck with that ridiculous fate and happened from 4 to 6.  She has issues and we know that already. Who wouldn’t, right? Lets say we forget about Laurie. Michael Myers makes no sense either.  He always struck in Haddonfield, so what makes him leave that comfort zone 20 years later and head to kill Laurie in North California now? I mean, if he was all high and mighty and knew all, as he seems to be in the previous instalments, then why not just go straight for her after his first escape back in 4? I know the technicalities are probably they couldn’t get back Jamie Lee Curtis to do that role or whatnot, but still, doesn’t matter who really gets slashed as long as they get hunted by Michael Myers, no? Either way, my head hurts from all the questions. 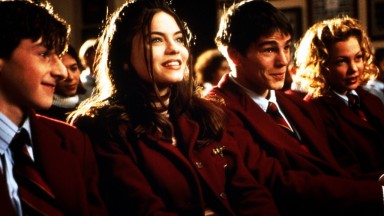 I’m not saying that I hated Halloween H20, I really am not. I watched this by myself so my imagination went running wild, as always so there were times I’d be tense but then this one was so predictable. I think its the fault of how they shot this one. Somewhere along the way, I started thinking that the purpose of Halloween H20 was to show why the first (or any of the others) was so creepy. For one, even when this movie was dark, it was still pretty bright.  Second, we aren’t supposed to see Michael Myers up close and personal.  He was scary because he was lurking around, and we never got a good look at him.  The shots were quick and we never knew when he’d attack.  This time, Michael was walking faster and always visible.  Plus, the mask was not scary and excuse me but blackest eyes, no they aren’t.  Are you lying to me Dr. Loomis or did his eyes change over the years? Maybe he’s softened up, but then, he hasn’t. 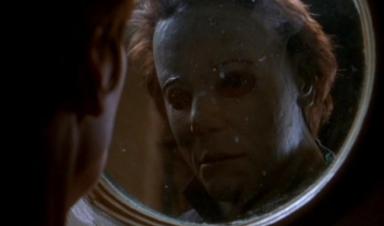 I went into this with little expectations that I was so happy to actually see JGL little role at the beginning.  I’m not exactly sure that part was supposed to yield that much excitement.  And then there was LL Cool J.  Hey, I thought he was pretty awesome in Deep Blue Sea and he was pretty hilarious in this one.  That was probably deliberate.  Not very fitting for Halloween but I liked it! Another thought going through my head for the cast was that I never saw anything with Josh Hartnett since Pearl Harbor and now I have 2 in a week.  I’m indifferent to Josh Hartnett but at least he wasn’t a brainless teenager in this one along with a young Michelle Williams.  So many familiar faces does give it a few extra points, right? 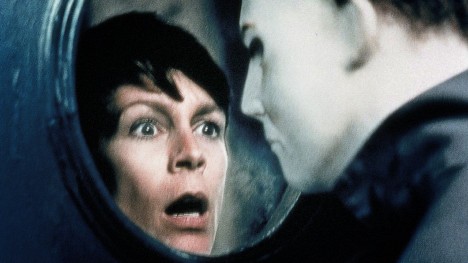 I think at this point, my review is already way out of hand.  Its just a lot of ranting and sarcasm.  Okay, I’m serious, I didn’t hate it because I was tired and by myself.  Overall, some tense parts but not a coherent storyline if you look at this in a whole.  Its predictable and doesn’t really have many scares.  I’ll leave it up to you whether you want to see this.

Happy Halloween everyone! I should have one more post up if everything goes as planned to do this my own way! 🙂 I’m getting that together right after dinner!

There you go! Seven Halloweens done! Have you seen them all? Which is your favorite? Is there something I’m missing in the story to link it better?