Its been a really long week and frankly its gotten me a bit down.  I always go to my Stephen Chow movie collection because it just makes me topple over with laughter.  This one is one of my long time favorites probably from when I was 8 till now.  I pretty much have it all memorized but every time its still super fun to watch.

Jing Koo (Stephen Chow) is the famous Handsome Tricks Expert.  He gets hired to pretend to be the son, Chi Man-Jing of a former affair that this man called Yan Chi (Man Tat Ng) had.  The goal is to get them fired from the current corporation that Yan Chi and his son, Chi Man-Kit (Andy Lau) now work at and distance them from the CEO`s daughter, Lucy Ching.  Lucy is currently undercover at the corporation to understand how the upper and lower levels are working together.  In the process, she meets Man-Kit through her best friend, Banana.  Shortly after they start dating and this is when Jing Koo gets hired and he tries to destroy their relationship.

This movie is one of Stephen Chow’s best movies.  Its hilarious.  What you need to know is that Stephen Chow is a man with absurd humor.  You laugh at his expressions, his movements and his reactions.  That is the part that makes it funny.  In all honesty, if you knew Cantonese this really helps because the dialogue actually consists of a lot of humorous puns.  However, my boyfriend who knows next to zero Chinese except for the random word enjoys this one a lot also.  Stephen Chow is definitely one of my absolutely favorite comedic actors that I have ever seen and I promise that there will be more. As much as Shaolin Soccer and Kung Fu Hustle put him on the map, this was 10 years before Shaolin Soccer and to me, that was his peak period in the Hong Kong industry and he had the top notch performances.  Tricky Brains is the one that I have known the longest among his movies but there will be a series that I will marathon called the God of Gamblers which I will review once I gather them all.

So back to Tricky Brains, the second known actor here is Andy Lau.  You probably know him best in Infernal Affairs.  I really don’t know what happened to Andy Lau because he has stopped doing his comedic roles now but has turned fully and mostly into drama or action.  However, he is still a very good actor.  What makes it even better is that he is a famous singer turned to actor and his performances are very awesome. 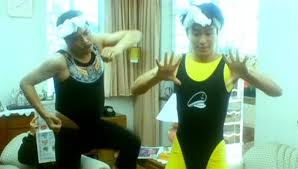 There another aspect that I can`t leave out.  In most of Stephen Chow’s successful movie (even in Shaolin Soccer) he always has his partner in crime, Man Tat Ng.  This two make the movie super fun to watch.  They have one of the best on-screen dynamics ever.  I watch these constantly with a huge smile on my face and then roll over laughing.

Overall, Tricky Brain is a fun Stephen Chow movie.  You have to embrace the silliness! Its one of my go-to pick me up movies!  I highly recommend it!  I heard from my friend that they have it on YouTube so if you ever want to, check it out if it is actually there.

Any Stephen Chow fans out there? How about Andy Lau? Have you seen them in other movies? Any other favorite Hong Kong actors or actresses that you like?