Welcome to the next double feature! This time is a rather female character driven combo with the Barden Bellas final hurrah in Pitch Perfect 3 and Amanda Bynes in What A Girl Wants. It seems like a decent pairing, don’t you think?

Following their win at the world championship, the now separated Bellas reunite for one last singing competition at an overseas USO tour, but face a group who uses both instruments and voices. – IMDB

Pitch Perfect 3 has really just been riding on the success of its first film (review) but for myself, it feels pretty much like the Step Up franchise. In Pitch Perfect’s case, its all about the acappella musical elements and the charming cast of Bellas that come with it. Pitch Perfect 3 is a farewell movie and while the story itself is rather disposable as its yet another competition that they need to try to win but this time, its a little different because its about finding closure for all of the main players: Becca, Chloe, Amber, Amy as they move on with their lives from this family to each seeing those problems that make them who they are. Its a bit messy and brushed over quickly for all those involved, mostly because for most of them they never had tackled personal problems for these characters.

Looking at the cast here, which retains itself from the Barden Bellas of Pitch Perfect 2 (review) but as they exit their lives after university and the many struggles of finding their own identity and purpose after their success, each have their own path right from the start and of course, their own issues that make them want to go on this final hurrah for them to compete again together. In many ways, Becca has gone full circle from the beginning to the end of this film where she finally finds success in what she wanted at the start in some form but now its her loyalty to the Bellas that holds her back, a bit of a reverse situation. Bellas is a wonderful little group of friends as they are unique in their different ways and different backgrounds, nothing more apparent than in this one, even if it does piece it together oddly.

Of course, aside from the Bellas, we still have the supporting characters including the staple characters of Elizabeth Banks and John Michael Higgins characters who have that additional comedic relief. On top of that adding in some other talent from DJ Khaled playing himself and a few side characters with Matt Lanter as the Bellas military guide and something of a bodyguard. The other groups competing for that one spot include Ruby Rose playing the lead singer of Evermoist. I remember that year, Ruby Rose ended up in three different movie sequels which was pretty fantastic as I love her style even if the Bellas were the main focus here. Of course, you also had John Lithgow sporting an Australian accent as Amy’s dad who “isn’t a very nice man”(quoting the line she uses to describe him).

Overall, Pitch Perfect 3 is quite a mixed basket but the musical elements are still there if you like these movies. The Bellas are still quite fun to watch and they get themselves into some serious trouble and Amy really steps up. At the same time, Its the right time to wrap this whole thing up and they do it really well in the credits with what looks like bloopers and extras from the production of the three movies together which is a nice path down memory lane. 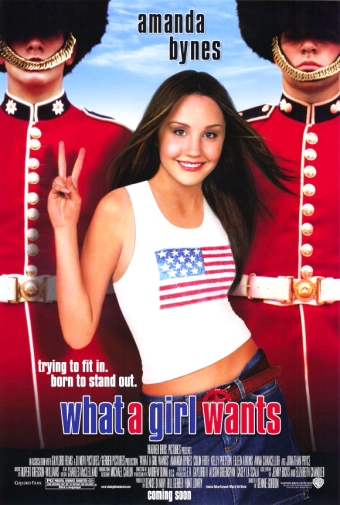 An American teenager learns that her father is a wealthy British politician running for office. Although she is eager to find him, she realizes it could cause a scandal and cost him the election. – IMDB

If you put together a dash of Mamma Mia (review) and then adds in a dose of The Princess Diaries, you will get something like What A Girl Wants but maybe a little less refined. Rightfully so because this was movie before Lovewrecked (review) earlier than the movie that I knew Amanda Bynes from, She’s All That. However, it does feel that Amanda Bynes always has that same type of character that she played really well in the 2000s teen movies that just seemed to work for her. Along with that, she did have Colin Firth playing her father with does boost this movie a little despite its rather run of the mill story.

With that said, Amanda Bynes plays Daphne, an American teenager who ends up reaching out to his British wealthy politician father who doesn’t know he exists. While she doesn’t want to lose her unique personality and herself in this new world, she soon realizes that to exist in her father’s world, she may have to in this part fish out of water story as well with adapting to some of the British terms and upper class etiquette. Colin Firth playing her father actually is an opposite type of character who is more reserved and contains his feelings and affection as well but soon also shows the side of him that Daphne’s mother loved, especially as the whole secret of who broke apart her parents in the first place comes to light and a few secret motives, that are actually quite obvious reveals itself.

There’s not a whole lot to say about What A Girl Wants. For people who like Amanada Bynes, this should fit the bill as its an earlier roles of more popular roles like She’s The Man but its still very much her style of humor and acting. At the same time, there are some very predictable moments and the script isn’t that great but it has some fun moments and Amanda Bynes’ character Daphne has some good empowering characteristics that I did like. Some good, some bad, I’d say its somewhere in the middle: pretty much one to save for a rainy day.

Thats it for this double feature!
Have you seen these two films?