Christmas is less than two weeks away and we’re working hard on these holiday viewings.  Netflix does have a nice selection of new movies and some that aren’t as new but still new additions. 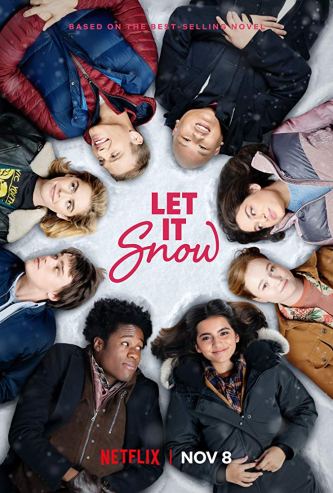 In a small town on Christmas Eve, a snowstorm brings together a group of young people. – IMDB

Based on the novel of the same name with 3 stories by 3 authors (which I haven’t read), Let It Snow is a surprisingly fun little film intertwining the three stories together to make one movie. Its style is in the style of Love Actually. It doesn’t land quite as well as Love Actually does but the three stories depending on which one you like more works more or less in the context of the story. Its main groupings goes to the childhood friends Angie “The Duke” (Kiernan Shipka) and Tobin (Mitchell Hope) and JP (Matthew Noszka); Dorrie (Liv Hewson), her best friend Addie (Odeya Rush) and Dorrie’s crush Kerry (Anna Akana); and lastly, Julie (Isabela Merced, previously known as Isabela Moner) and Stuart (Shameik Moore). All of these characters eventually end up, along with some friends and other supporting characters end up because of being snowed in during Christmas Eve at this local restaurant called Waffle Town.

Let It Snow is rather basic and simple and yet with the snowscape background and its interesting characters and stories about different types of friendships and relationships and a variety of different issues, these characters all end up having a Christmas Eve that becomes rather memorable and changes some of their things in life as they figure out how to be honest to themselves about their feelings and their future. It has the rather feel good elements present that makes it a decent watch. Is it something that is spectacular or very stand-out as a holiday film? Probably not. But to satisfy a simple little holiday watch, this one does deserve a chance. And that’s coming from myself who isn’t really much of a John Green fan (which explain why his segment of relationship is the one I liked the least) whereas my fave with genuinely fun moments although a few wooden acting moments between Julie and Stuart however the story itself is fairly charming.

Kiernan Shipka has definitely found herself an actress with a few Netflix films at this point. She does have quite a nice fun element to her characters. At the same time, the start of this one that plays a rather funky character, the Tin Foil Woman and the narrator is Joan Cusack who while a little odd somehow has this glue effect to the three stories.

Take a little of changing identities and the holidays and we have this film Holiday Joy where Bailee Madison’s character Joy becomes a member of the next door neighbor’s  family, a wish that she has of breaking away from her lacking family. The grass is greener on the other side is definitely used here as comparison and literally but it also gives the valuable lesson that what you see on the surface of the beautiful appearances sometimes aren’t really as you expected. The whole reality vs. expectations is the main basis as everything that Joy believes is better all turns out to be very much the opposite. It also emphasizes on everyone’s part having a crucial effect despite her feeling of insignificance and such. Holiday Joy is more about the message it carries but has a rather lacking execution with some questionable acting and some plot points that might not make a ton of sense as with such plots that bring in the whole identity change and incoherent things that just leaves it one that shouldn’t really be questioned to begin with.

Holiday Joy is a rather simple sort of story. Its not exactly a Christmas story but is set during the holiday season. There’s some nice elements of using “change” as its main focus and then takes a fun little play on how the accident that makes Joy’s reality change also eventually finds her figuring out how to change it back but not really at the same time. Its a nice little change on the usual formula. Its not an outstanding movie but for people okay with some simple and straight-forward type of TV movie, its an alright choice. For myself, I do enjoy Baileee Madison (mostly when she was in younger roles) so it had an appeal for me but a lot of performances here left a little bit to be desired.

That’s it for this double feature!
Have you seen these two films? What are your thoughts?