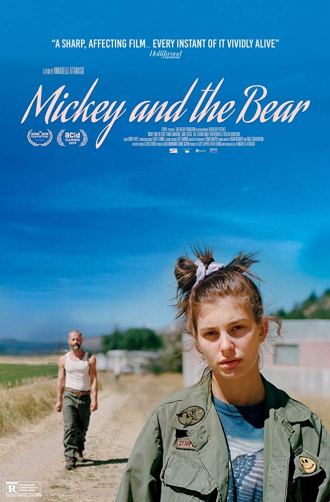 Taking a reverse look at a father-daughter relationship, Mickey and the Bear approaches this story through the daughter’s perspective as Mickey takes care of her alcoholic veteran father Hank who suffers on certain level to rehabilitating to everyday life, while navigating her own life from making money to keep them afloat to wondering about her own future as high school graduation approaches and of course, boys. This is a toxic relationship between the two and yet, Mickey clings to this belief of taking care of her father despite his often inconsiderate and disrespectful attitude towards her because of those high points that he reaches. As she starts feeling the strain of this relationship, she hangs on the point of whether she can leave.

Being the directorial debut for feature film for Annabelle Attanasio who also is the writer for this story, Mickey and the Bear is a thought-provoking drama. Father-daughter relationships are also a great angle and to switch up both the norm of having a delinquent teenager to the struggle mentally for a veteran to re-adapt to everyday society is also a good one.

Set in a small town, the story progresses to have little subtle details that possibly even the main character Mickey also ignores which works up to a shocking finale that defines the deeper toxicity of this relationship. The reversal of roles is noticed for example in how just like parents address their kids by their full name when they get in trouble, Mickey will address her father as “Hank” only when he does something that disappoints her- perhaps her small form of retaliation in a situation that feels initially like she is stuck in forever. Choosing to use mostly the eyes of Mickey to tell the story also gives it a lot of depth for both her character and leaves room for the true going-ons and intentions of others around her to reveal itself gradually. Its a journey to a potential break-point as she faces a lot of the realities of her current situation. Its all in the little details of the people she meets, perhaps a little deliberate at times and makes the story be on rails, but its all a small factor to the accumulated effects on Mickey’s character and whether its enough to push her to follow her own heart and let go. Its all in those little details of the script and here its executed very well.

A lot of praise goes to the cast here, especially the two leads: Camila Morrone playing Mickey and James Badge Dale playing her father Hank. As a young actress, Camila Morrone grasps her role very well as Mickey. She’s able to portray the different sides of her life and how its toughened her up. The character designed here isn’t weak, in fact when times need, she will defend and protect herself and not let things go against her will. Its a fascinating character to watch unfold on screen. The same can be said about James Badge Dale who also manages the character of Hank very well. Its all his eyes and managing this character which is very extreme shifts in personality with very high and very low points that drives it. It has a certain level of possessiveness as well as an equal portion of not caring and that is the true nature of his toxicity that he brings to this father-daughter relationship.

There’s a lot of great execution from character development, the direction the story takes to even managing the little details and subtleties of the underlying breaking point that makes Mickey and the Bear a thought-provoking film and one to definitely not miss.

Mickey and the Bear has one more screening during Festival du Nouveau Cinema on October 19th at Cineplex Odeon Quartier – Salle 17. You can find more info HERE.