SINCE SEPTEMBER
by: Noelle MacLeod 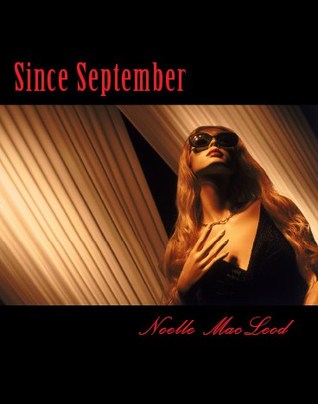 For Sheridan St. John, things just haven’t been the same since September.

It’s early autumn when wall-flower Sheridan and her best friend, Cyndi, move to the city to begin their lives as young adults. On their own for the first time – and away from the harsh criticisms of Sheridan’s mom – the girls are enjoying their new independence. But after a wild night of partying, Sheridan’s grip on reality starts to weaken. When a gruesome tragedy then strikes her family, she’s convinced it’s all an epic nightmare… one from which she must somehow awaken if she is to survive. – Goodreads

Since September is a thrilling little psychological ride. Whether it lands in the horror zone is still on a fairly light degree although the imagery of some parts are done pretty well to give a good idea of the gruesome bits and the more creepy psychological bits. Structured as a novella, the story paces itself really well to never actually have any mundane down moments and it wraps together the false sense of security for its character Sheridan while also giving it some gripping moments which gives a lot of credit in the writing itself. Although the endgame is fairly obvious, Sheridan doesn’t know and having more knowledge in this case gives her character the space to develop a bit on why she is the way she is.

Essentially, the story is split into two parts: before and after the turning point event that changes the location pretty much. The second part is similar to the likes of movie Girl Interrupted, which is somewhat of a spoiler but is a compliment because of all those supporting characters in this space. Its important to have those supporting characters as they elevate the story a little more, giving it a bit of humor or the life it needs or the encouragement to move forward for Sheridan’s character. These supporting characters are all fairly shallow and that has to do with the novella territory which is a short length story so lacks the depth for growth.

This is a novella so to avoid any more spoilers, I’m going to wrap up. Overall, Since September is a fun read. Its a pageturner for sure. The story is character-driven and Sheridan is a good character to navigate. There still leaves some mystery to her at the end but the pieces presented in this story works together well enough. My only thing here is whether the readers figuring out the twist before the character revelation was deliberate or the fault of dropping a few too many clues beforehand. There is a very fine line in navigating the realm of psychological stories and while some scenes felt a bit repetitive in structure, decreasing its psychological horror elements, however there’s still a nice sense of thrills and the set-up at the beginning is done pretty well also.

3 thoughts on “Since September by Noelle MacLeod”