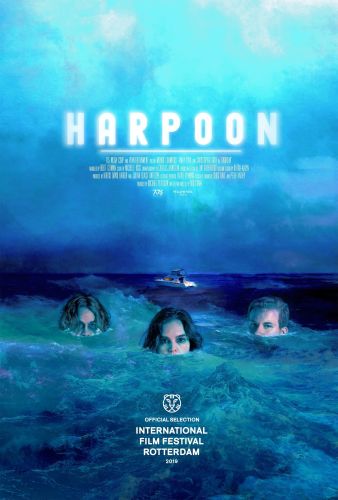 Harpoon is a 2019 Canadian dark comedy horror film about three friends who need to set aside their differences to survive being stranded when the yacht breaks down in the middle of the ocean.

Harpoon starts in a fairly dark comedy way introducing its film with a snarky narrator (Brett Gelman). Jonah (Munro Chambers) is a young man who recently lost his parents and needs to clean out their place when his best friend Richard (Christopher Gray) drops by and beats him up, suspecting that him and his girlfriend Sasha (Emily Tyra) had hooked up. After realizing it was all a mix-up which involved getting him a harpoon for his gift, he makes it up to them by going out to sea with his yacht. As issues arise between them, the yacht also breaks down, leaving them stranded in the middle of the waters with no help and not a lot of useful things to keep them alive except others company and more secrets to dig into.

Mostly set on the yacht and in the water, Harpoon is something of a one location film. It opens at Jonah’s home but quickly shifts over to the yacht and the waters. The film is shot in Belize and the overhead shots of the yacht constantly shows the isolation of the location. Harpoon utilizes its space, or lack thereof, on the yacht proficiently and its water around it as well to structure its scenes and consequences. As expected in one location, three people can be many especially when it is three best friends with grudges and suspicions trying to survive. The trajectory isn’t exactly unpredictable but the narrator, done by Brett Gelman adds a lot of substance to the story especially as they are aware to get the story paced tightly but the narrator will fill in the gaps of what the viewer needs to know to give the characters and situation more depth. At the same time, it helps to relieve some of the tension as he brings in the dark comedy of overlooking the situation. Its a nifty addition that adds quite a bit of fun to it all and Brett Gelman is a fantastic choice at getting this job done.

The film is reliant on the three characters being like onions, peeled layer after layer to keep having more to discover. Munro Chambers, Christopher Gray and Emily Tyra do a great job at delivering their roles as the situation get worse on the yacht and the secrets and tensions start building. All three of them have their own traits that balance out this friendship but because each of them have their own little secrets and their own motives, the whole situation ends up having a lot of depth. It turns into a game of trust and wondering when the next thing will be revealed and the tables turn again. The film is rather over the top deliberately in parts and it helps justify some of the overacting here. Fact is, while acting-wise all three do a great job, the characters are more in depth in terms of Jonah and Sasha perhaps because more of the past involves their mishaps and emotional hardships while Richard’s character in comparison is less complex and feels less fleshed out.

Harpoon has its obvious issues. There is some leaps of imagination here and there are gaps in the story, especially when pulling in the idea of survival based on an Edgar Allan Poe story. A lot of common sense probably needs to be tossed out the window to accept their actions but desperate measures, right? However, the tone right from the beginning with the narrator and the contrast with the tension in the reality of the situation makes for a lot of dark humor that lands really well. Its not for the squeamish though since it does have a decent amount of blood and violence. The title Harpoon is really probably just a metaphor or the start of things breaking down for their situation. Bottomline, Harpoon has its issues but its easily looked over due to a well-executed and sharp script. Whether its the one location, the characters and its blend of dark comedy and horror suspense elements, this movie is worth a look.