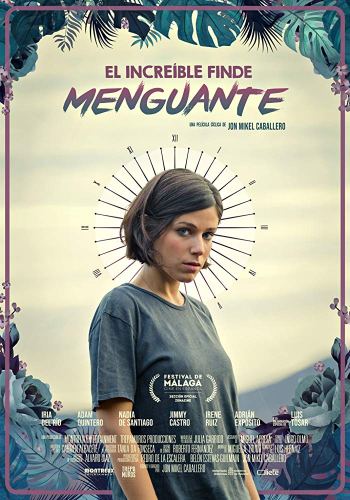 The Incredible Shrinking Wknd is a 2019 drama about a girl going on a reunion weekend away at a cabin who ends up getting stuck in a time loop that decreases in time with each reset.

The incredible Shrinking WKND opens to a group of six friends who are having a reunion at the cabin. As they learn about each other’s current state and about their future plans, Alba (Iria del Rio) and Pablo (Adam Quintero) seem to be the couple who seem to be fine on the surface but after dinner, Pablo suggests to break up. As she goes for a hike the next day, she goes into the old weapons factory area, a point of interest for the group and ends up triggering a time loop where time freezes and she wakes up again on the car ride to the cabin. As Alba wakes up each time, she starts from enjoying what feels like an infinite time loop to realizing that it shrinks by the hour with every reset. What starts as a fun little time loop that she can be in control soon becomes a journey of self-discovery and  at 30, a late growing up to adulthood as she embraces her feelings, her friends and her love.

Let’s face it, time loop stories are tricky. They can get repetitive and they can get lost. Its hard to say that WKND doesn’t  get repetitive but the script remembers to always make each time a little different, especially in the first few loops and as Alba transitions in her different revelations from denial to finally wanting to make amends. It works through some of this by doing speed cuts of the crucial parts, putting more focus on the changes and the meaningful parts to see new discoveries and the character development for Alba. While the middle section does feel like it dwells a little too long and then picks some sections to focus on over and over again, it does try to put together the pieces at the end.

WKND is heavily focused on one character. While the other 4 friends and her boyfriend are very much present here and there in each loop in different ways, they all have their own new bits of information that gets revealed , Alba is the main focus. Iria del Rio is compelling in this role. Every reaction as she breaks down to her enthusiasm to her revelation and uncertainty of what will happen and trying to figure out how to escape the time loop becomes a journey that is satisfying because she becomes a character who grows and one that is worth fighting for as she strives to improve. Its a change from the girl that started this movie who didn’t seem to care about anyone, was insensitive, irresponsible and had no direction.

At the end of the day, WKND is a time loop movie with depth. It dials down to a good execution of the content and a close look at one character’s growth. However, all this is small compared to what makes this Spanish indie unique and that is its choice of how it presents the film. The constant narrowing screen is gradual and at first, might not even be noticeable. All the effect of time urgency as well as packing in the crucial details of the shot closer together gives it a somewhat claustrophobic feeling. Its a big question of what happens after, when there is no more hours of the same day to take away and how Alba will use that final hour. This final element makes cinematography stand out and is the truly unique element of this film experience.

The Incredible Shrinking WKND has an encore screening at Fantasia International Film Festival on July 22 at 4:35pm at the Hall Auditorium.

One thought on “Fantasia Festival 2019: The Incredible Shrinking WKND (2019)”