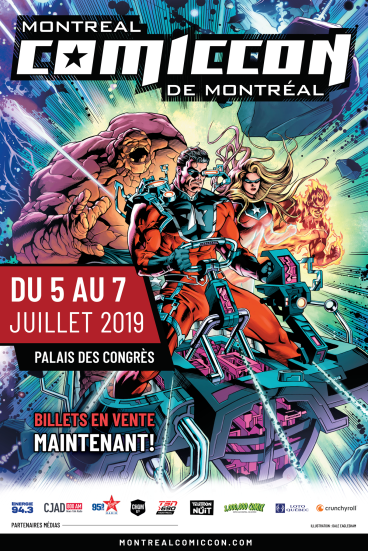 I’ve been covering Montreal Comiccon for the last few years mostly for Game Warp and shared some of the cosplay and hauls over here but have never really talked about Montreal Comiccon in depth. This year, I’m thinking that there are some fun little bits to highlight as a beginner’s guide to Montreal Comiccon, in case you are in town and might consider it a fun event or think its one that you’d like to check out at some time in the future (just a guideline since guests and such change every year, as expected).

The 11th annual Montreal Comiccon starts today on July 5th and runs throughout the weekend to end on July 7th at Palais de Congres in downtown Montreal. Over the three days, there are over 200 activities including panels, workshops, concerts, masquerade, improv, board games, screenings, autographs sessions, photo ops and more related to all things pop culture: anime, movies, TV, comic books, gaming.

On interesting fact to know is that all kids five and under go in for free all three days, while kids ages 6 to 12 get free admission on Friday and Sunday.

Here’s some of the highlights of whats to come over this weekend, for further info, you can find the schedule HERE.

Set in the vibrant game development scene of Montreal where not only multiple AAA studios has their offices or headquarters, there are even more independent game developers lurking in every corner. One of the big highlights of Montreal Comiccon for gamers is the Indie Gaming Zone. Indie Gaming Zone will have many game developers showing off their games recently released and in development along with their playable demos so that you can experience it and share your thoughts with them as well.  We will be  having coverage for the Indie Game Zone over at the Game Warp Blog (as well as on That Moment In) during this weekend.

In other gaming highlights: Dreamhack doesn’t hit Montreal until September but before that, you can get a taste of it at the Dreamhack Gaming Zone where there will be a VR station to try out some VR games while also having a PC Freeplay Zone. You can also find the Tabletop Gaming area where there will be an assortment of board games to try out with your friends. While if you are in a more competitive mood and up for a challenge, there are activities for Combat Archery and Rage  Academy (Axe-Throwing) that you can check out.

Gaming also has a good few panels. From the more technical game concepts like Fantasy Map-Making to Narrative Nightmares & Lessons Learned which will talk about writing video games to the basics of launching your game via crowdfunding, Crowdfunding 101. There are also panels on specific games like Jurassic World Alive, Overwatch and Watch Dogs 2.

Movies is a big part of the pop culture with multiple franchises having their cast show up to talk in Q&A panels. At the same time, they are also available for photo ops and autographs. Some of the highlights would be Harry Potter franchise has James & Oliver Phelps and  Tom Felton. Set in the same universe, Dan Fogler from Fantastic Beasts movies is also there. Star Wars fans can see Ray Park.

Disney fans will be happy to find Jim Cummings, the voice actor of Winnie the Pooh and Darkwing Duck as well as Paige O’Hara, the voice actress of Belle in Beauty and the Beast. You can also find Ethan Peck from The Sorcerer’s Apprentice (who might be there for the more recent Star Trek: Discovery) while in the superheroes movie world, Shazam!‘s Evan Marsh is also present. Fans of Highlander and Mortal Kombat can see Christopher Lambert in a panel. For fans of Quentin Tarantino films, you can also check out the panel with Michael Madsen.

The guest of honor does have to go to Elijah Wood who has not only TV series under his belt but also The Lord of the Rings trilogy as well as various indie horror films in his filmography.

This year’s TV-related guests has an incredible line-up. There will be The 100 panel with Bob Morley, Eliza Taylor and Tasya Teles. The much more recent The Umbrella Academy has Robert Sheehan and Cameron Brodeur also in a panel together. Lana Parilla will be there if you are a fan of Once Upon A Time.

Of course, that is just touching on the categories we cover here. Anime, cosplayers, comic book artists (Dan Parent, Kevin Eastman, etc) as well as wrestlers, MMA (Georges St-Pierre) and kickboxing figures will also be there this weekend. If you need a break, the Artist Alley and Exhibition Hall is always a nice place to check out a ton of cool merchandise and of course, some great art from different artists based on pop culture in their own style.

That’s it for this general guide!
We’ll be covering Montreal Comiccon and will be having Day 1, 2 and 3 recaps.