This double feature is incredibly late. I saw these quite early this year. I always meant to pair these two together. While A Quiet Place and Birdbox are quite different, they both rely on honing into one sense and that is a fantastic angle that had me intrigued right from the moment I first saw any trailers for it, plus they both have leading ladies that I liked a lot as well. 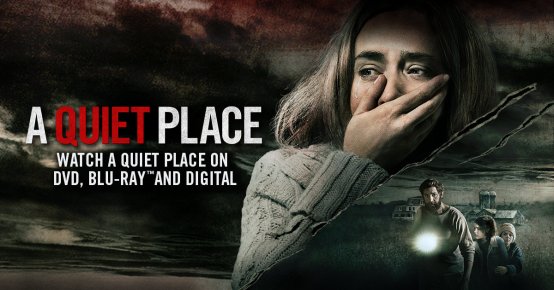 In a post-apocalyptic world, a family is forced to live in silence while hiding from monsters with ultra-sensitive hearing. – IMDB

A Quiet Place is one those movies that are incredibly interesting in terms of the premise. Its an intense thriller because of the use of the silence and the meticulousness of the little details of how this family lives. The strength of the film has a lot to do with the quiet and the mysterious control of the monsters here. It also has to do with the script and the characters and how they each grow throughout the film to see what place they each have. There is no doubt that Emily Blunt and John Krasinski bring a lot to the film however, who does stand out is Millicent Simmonds and the emphasis on the relationship of her with her parents especially the journey she has as she lives with this guilt and these abilities. The best parts are the hunt and the genuine feeling of survival and the stakes in play.

However, there is one thing  that I can’t get past for this film. It has to do with the basis of this film of how the situation managed to get to the dangerous state that it is and that is Emily Blunt’s character’s pregnant state. Very different from it being a situation that happened before the danger arrived, this happened while knowing the risks of it. With that said, this doesn’t align with the whole mentality of what this family we see has tried to achieve the entire time. That is a plot hole in my opinion and something that feels contrived. Aside from that though, because as the movie intensifies, its easy to ignore and accept the situation at hand and it delivers on a lot of levels. Seeing as this is John Krasinski’s debut directorial effort, this is a solid piece.

The only thing that I’ve had on my mind (which still I wonder on) is that while the movie relies on silence, there is a prominent soundtrack that sometimes is less than subtle. It makes me wonder whether it would have achieved more with less soundtrack and more focus on the quiet. Its something that bothered me also when I saw The VVitch (review).

Five years after an ominous unseen presence drives most of society to suicide, a mother and her two children make a desperate bid to reach safety. – IMDB

Bird Box is a really nice example of how the big Hollywood can take in a sophisticated filmmaking efforts that Netflix has to offer. There are things that don’t always make sense and it has its moments that aren’t quite as refined but this post-apocalyptic world and the world-building and the survival and character developing is all such a huge part of what makes Bird Box shine above all those imperfections. In some ways, there are  a lot of parallels to A Quiet Place but somehow Bird Box works better in that aspect because it starts in a situation that was made out of necessity. The structure of how the story is told makes a contribution to its success and effectiveness. All the way from why Sandra Bullock’s character changes over the course and seeing the need to find salvation to her two kids who she calls Girl and Boy and remains nameless throughout the film. The history of it makes it work because it helps build up the different elements of the invisible danger outside.

Sandra Bullock is an awesome actress and she takes on this role so well. A lot of credit has to go with the character being written really well. There’s a lot of great actors in here which creates a lot of layers to the story itself, making it a more psychological experience and a human nature sort of deal. There’s a more self-preserved character that is more grounded to the reality of the post-apocalypse played brilliantly by John Malkovich and a fairly shorter role of BD Wong and then, a great performance playing opposite Sandra Bullock by Trevante Rhodes that we first saw in Moonlight (review).

Bird Box stands out to me the most because of its tension. Its psychological aspects especially because the whole nature of the villain or outside factor that attacks civilization is about that as well. There are a lot of little details and reveals in the story that make it work. In some ways, there are elements that remind me of 28 Days Later and having the sense of hearing becoming a central sense works here also.

That’s it for this double feature!
Have you seen A Quiet Place & Bird Box?