Welcome to the first Double Feature of 2019! We’re starting off with a strong pair of Oscar-nominated/winning films that I caught up with over the holidays. I went into both of these films with only a general knowledge of what it was about. Most of the time, I don’t stay too current with Oscar movies and are in no big rush to catch up with them because I’m not a huge fan of watching dramas however, a little spoiler, no regrets on watching either of these. 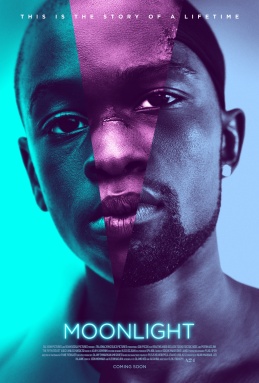 A chronicle of the childhood, adolescence and burgeoning adulthood of a young, African-American, gay man growing up in a rough neighborhood of Miami. – IMDB

In some ways, Moonlight reminds me of Boyhood except it takes an African-American boy’s life in chapters, taking a snapshot parts of his life from when his young childhood when people called him Little and finding refuge in a man’s care who accepts him and takes him under his wing to face the cruel reality out there. The second part takes us into his teenage years as Chiron as he grows to embrace his sexual orientation. It highlights his friendship with his childhood friend Kevin who has always been there even from the first part who never questioned all the bullying towards him. The third part fast forwards to Chiron, now an adult who others called Black and has followed the footsteps of his mentor.

Choosing to look at the snapshots of his man’s life from boyhood to adulthood is a very nice way to execute this film. In fact, its part of why this film shines. , there are always factors that give the story a thread to tie it all together from the start to the finish. It also lies heavily on its cast who does a fantastic job. Mahershala Ali may have had a small role but his role’s influence plays a big part. At the same time, Janelle Monae is also spectacular as well. I’d go to the say that the supporting roles here are as powerful if not more powerful than its main lead. All this really dials down to the fact that the script itself has created some compelling characters that feel incredibly genuine.

The story of a team of female African-American mathematicians who served a vital role in NASA during the early years of the U.S. space program. – IMDB

Hidden Figures is one of those films that I finished up the film and was so pleasantly surprised because of not only its content aka the story its telling but also due to its well-rounded messages and tone which is serious but managed to also give it a fair bit of lighthearted humor to round it out. It gives a lot of credit to its incredible cast. The main reason being its three leading ladies whom I liked a lot to begin with: Taraji P. Henson (can’t remember if its from Hustle & Flow, The Good Doctor or Date Night); Octavia Spencer (from The Help) and Janelle Monae (from Moonlight). They do such a great job especially when looking at their dynamic together in some scenes where they carry the film and highlight the inequality in the workplace and the inconveniences. Of course, the film is also full of other memorable roles whether its Kevin Costner, Jim Parsons including Kirsten Dunst as well.

Its been honestly years since I’ve been incredibly impressed by an Oscar-nominated film. Its a shame that it didn’t win anything. It isn’t a surprise of course because Oscar has a specific type of films that always wins. Hidden Figures feels too light-hearted and fun albeit having its drama. Regardless of Oscars or not, Hidden Figures is a fantastic film lead by three spectacular female actresses, a poignant supporting cast and managing to find a great balance between a lighthearted tone despite its serious historical drama.

This wraps up this double feature of Moonlight and Hidden Figures!
Have you seen these two films?