Continuing on with the Halloween movie watching, we’re back to something a little more current with a 2018 film. While a lot of people got this on Netflix, Canada got the theatrical release and therefore only just got it available on Netflix now. I remember watching the trailer for this and being incredibly interested in it. It felt like it would be a horror thriller with science fiction and such. Honestly, at this point, I don’t remember much from the trailer except the general storyline.

A biologist signs up for a dangerous, secret expedition into a mysterious zone where the laws of nature don’t apply. – IMDB

As usual, I’m going to be clear that I’ve never read the source material so this write-up is based completely on the film itself.

Annihilation comes as a midway point  for myself. I had some high expectations for it when I first saw it announced but somehow that feeling has gone away a little. As for whether it met my expectations, I’d have to say that it did in one way and then it didn’t quite reach what I had expected it to be completely. A part of me also thinks that this isn’t quite horror. Its more of a scifi/fantasy thriller with horror elements. With that said, Annihilation is visually very pretty. The creativity behind the world that the five scientists go into definitely was an eye-opening experience just to see the ideas behind it and how it was executed. The execution itself is a recount of events from Natalie Portman’s character and with that centers her as being the main character which makes it out by all means but then it jumps from mostly in the past rundown of events but jumping back to the present as she is being questioned.

The creatures in this world and the flora and the colorfulness that covers all over the world has this sinister yet mesmerizing sort of effect. The world creation actually is the plus in Annihilation. Its the mystery that surrounds it which makes it so intriguing to keep watching just to see what more there is around the corner. There is this creeping feeling of something bad always going to happen because of the little that we know especially with the history of no one making it back from this area. At the same time, there is a lot of genuinely dangerous moments that happen at fairly unexpected moments. There are some that pack in quite a lot of atmosphere building tension. 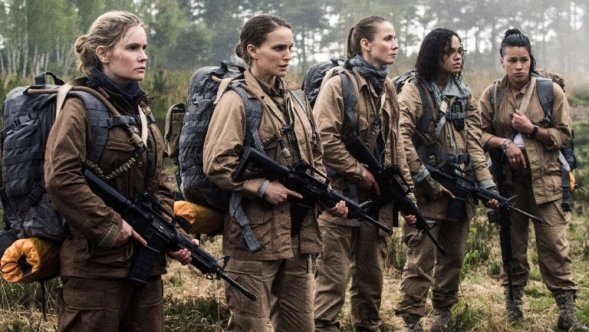 As for the cast itself, I haven’t seen Natalie Portman in too many movies so I’m not sure that I’m exactly impressed with her performance. To be honest, everyone does a well enough job but nothing really does standout because it becomes fairly obvious that the scientists here are only half developed especially with anyone outside of Natalie Portman. Everyone seems to have some past that gives them some form of weakness but its never given enough attention to make them memorable. Some of them seem to fall a tad flat. For anyone back in the facility with Benedict Wong who only plays as a tough interrogator while Oscar Isaac is a survivor that pretty much that falls into a coma after the events and is the main reason behind the mystery and why Natalie Portman’s character goes into this area. His parts are best described as powerful because of what the scene delivers but its Oscar Isaac and he always has some presence but he’s more of a supporting leaning into cameo part. However, there are some familiar faces like Jennifer Jason Leigh and Tessa Thompson.

Overall, Annihilation is visually very impressive and the story and execution uses ambiguity to create mystery and suspense and that works especially with the beautiful world they have created. However, there’s something lacking about it that makes it hard to really be completely memorable and that probably gets down to lack of character development. There has this effect of giving the story something to think about at the end but then, I’m not sure it actually lingered that long in my mind.