For anime lovers, Bleach has been a long time in the making. It has an incredible amount of episodes in the original series itself and that isn’t counting the animated movies derived from it alone. However, even if you have no knowledge of Bleach from its source material, this live action adaptation starts at the beginning. It tells the story of a teenage boy called Ichigo (Sota Fukushi) who loses his mother at a young age and can see ghosts. Nearing the anniversary of his mother’s death, his sister is attacked by a being called a Hollow and a soul reaper girl Rukia (Hana Sugisaki) from the Soul Society comes to his rescue. In battle with the Hollow, she ends up being injured and out of desperation despite the strict rules, she notices his high spiritual powers and transfers her soul reaping skills to him. While he defeats the Hollow, she transfers more than she intends and turns into human form forcing her to become his classmate while she trains him to be strong enough to return those powers. 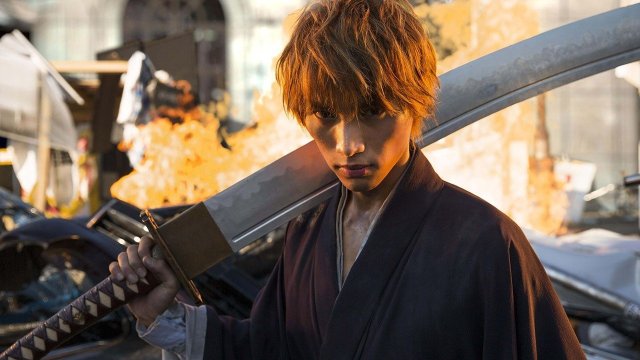 Starting from the beginning of its source material may be the saving grace for Bleach. In this way, they manage to pull of a film that introduces its audience to the world through the eyes of Ichigo as he first encounters it himself. Of course, there is still a lot to learn about Ichigo himself from how he lost his mother to how he can see ghosts, although the latter along with the high spiritual power elements are more of a between the lines connection. Even with 2 hours, Bleach merely skims the surface in demonstrating this world that has been built. Soul Society doesn’t get touched on a lot except for that one rule and the two men, Byakuya (Miyavi) and Renji (Taichi Saotome) who show up to track Rukia, on the other hand, a member of Quincy, Ishida (Ryo Yoshizawa) pops up which gets a brief backstory to his purpose with pursuing Ichigo. Lots of information to digest here and it is no surprise that the script chooses to bring in these characters to build up the main story. In some ways, it works out because the main story revolving Ichigo brings in family, ties into his history and ends up developing his character quite a bit. On that note, Fukushi takes the role and runs with it in a spectacular way. His portrayal gives Ichigo so much charisma that it’s hard to look away from what he goes through. Luckily, this approach keeps the story contained, and at the end of the day, the movie takes the step to wrap up the story as it ties up all the loose ends.

Bleach has some charms and some minor issues. In terms of charms, it does feel like you are watching a live action manga. The characters have the goofy manga reactions and in the live action version, it creates a lot of comedic moments to cut through the tension of fighting the mystical unbeatable Hollow. It even throws in some explanation in manga drawing form to probably give it some link back. The Hollow itself is some good CGI work there. The action is done fairly well and the weaponry is replicated really nice albeit some obvious CGI work as well. The best part of Bleach is the score and soundtrack. It is energetic in the hard rock music way that blends so well with the tone of the film as a while. However, its minor issues lie in the pacing where the middle lags a bit in development and sits are a weird transition point that takes a while to get there. Because of some lack of depth, some characters here feel disposable as their purpose feels merely to achieve something or another. That is price of placing the focus on the main story but only skimming the surface of the other arcs. However, this is a movie and the effort to keep it contained is admirable especially with how much Bleach has grown since it was first created. It is still an entertaining fantasy action adaptation that does a lot more right than it does wrong.

This review was posted also on That Moment In.