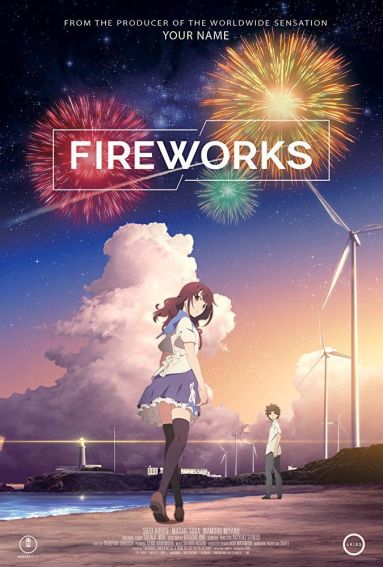 Fireworks is based on the 1993 live action TV series with the same name and produced by the producer of 2017’s Your Name. The primary story is an adolescent romance which starts from two school buddies, Norimichi and Yusuke who both have a crush on a quiet girl in class, Nazuna. Little do they know that Nazuna’s mother is planning to be remarried and she will be moving, however she has her own scheme to run away. In the moment, she places her courage to run away with whoever wins the swimming challenge she suddenly suggests using the excuse of the traditional fireworks event to go on a date with her. While Norimichi and Yusuke’s group of friends debate and bet on whether fireworks are round or flat from the side and set up to go to the light tower to settle it, the boys are caught up in being struck by whether to go on a date except there is a twist when Norimichi learns about the true abilities to turn back time from a glass ball that Nazuna had found by the ocean that morning. Here lies the central theme of this story as we take a look at what-if things were different and you could have a do-over of your choices.

Right from the opening credits of Fireworks, the soundtrack and animations are absolutely spectacular. Its sets the mood and tone of what is to come. The colorful world and the different filters used especially paired up with a charming story about young love and what-ifs. The twist to the normal formula is the groundhog day elements adding a  bit of science fiction to it all. There are little details like the transition of the rewind of the magical glass ball that lights up these coils which looks like the word “if”. There area few rewinds in the story and little subtle changes in the environment. One of the examples is after a rewind, there was a sketch filter over the scene for a while and it added such a beautiful detail to it. It made each rewind feel like it was in a fictional world and breaking away from reality but somehow into a wonderful alternate reality. It extends to the small things like when we see the different ways the fireworks are shown in the different possibilities. Its all these little details that make the a animation even more gorgeous to look at. 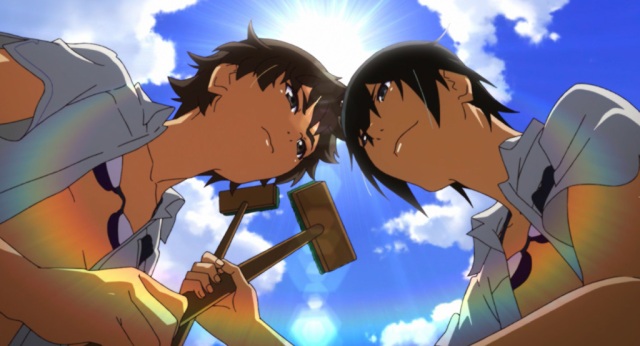 The story also has a lot of its charms in sharing this genuine and believable story despite all the groundhog day elements. The reason why its feels so close is in these believable teenage characters. They act like teenagers. The boys debate about silly things like whether the fireworks are round or flat and place bets on who is right as each of them believe that it can’t be the other way. Teenage boys are scared to share their feelings and when given the opportunity, they let their fear take over and run away from it. At the same time, it’s about finding the courage to do the more daring things and breaking out of the comfort zone. It is a nice dose of also seeing the different paths that the different choices would result in. All these elements make it feel like a natural teenage story.

Fireworks is a charming story in its genuine characters and the beautiful detail in every scene of the animation. It packs in a lot of adventurous moments while still having those heartwarming young romance elements. It never hits those sappy moments because the storyline also involves some family conflict as well as navigating the teenage friendships and jealousy. Fireworks finds a balance in telling a charming story packed with colorful and gorgeous animation while adding in that sci-fi element to make the what-if element blend so well together.