An environmental analyst is asked by the police to determine if two deaths by hydrogen sulfide poisoning are an accident – or a murder. But when he meets a young woman at both sites, a scientific mystery begins. – IMDB

Based on the 2015 novel by Keigo Higashino, Laplace’s Witch takes its audience for a fantasy and scientific journey. With Takashi Miike at the helm, the accomplishment from his experience is the beautiful setting and the mood that the entire mood sets. The atmosphere and the shots are done incredibly well. It makes some slick moments that create the tension needed for the mystery. The rural Japan setting works great and many of the other backdrops used work beautifully to elevate the scenes even more. As with most Japanese movies, the humor they execute is still very familiar here with some comedic breaks in simple dialogues and expressions in the different characters. Its slightly dark and sarcastic but works with the tone of Laplace’s Witch. 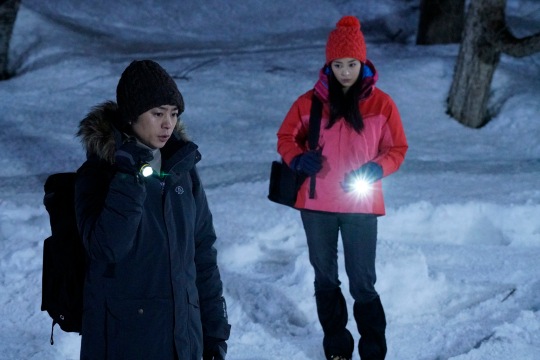 There is a certain charm to this novel adaptation. I have never read this novel before and know nothing about it. However, assuming its faithful to its novel as the screenplay writer is the author himself, this story has a lot of great elements. It has a strong scientific angle and also wraps in some supernatural aspect also. There’s a crime to solve which honestly is quite the head-scratcher seeing as any possibility has a near-zero chance of happening making it hard to determine. However, the introduction of the young woman who calls herself Laplace’s Witch aka Madoka (Suzu Hirose) is where the story brings in a lot of charisma. While her character feels rather simple and one-note whether in her expressions or her actions, Suzu Hirose ignites a convincing role which makes Madoka’s plight feels honorable and genuine and its makes us root for her. Paired along with the professor Shusuke Aoe (Sho Sakurai), they become quite the team especially since the professor is an oddball who shows genuine passion in his rare field of earth science that no one else seems interested in. There is some great charisma between these two characters. They are familiar characterizations but somehow work for this premise. In the spectrum of these two characters, a lot of scientific theories are put into the story including the main foundation of this movie being French mathematician Pierre Simon Laplace’s articulation called Laplace’s Demon.

Disappointingly, where Laplace’s Witch starts to fall apart is in its pacing. The story while had its unique elements with the scientific aspects and discovering the root of the special abilities that Madoka possesses which leads to unveiling why she feels the urge to be involved in helping with the investigation alongside the professor. While the story itself has some nice twists and turns which are slightly fantastical and far-fetched, the fact that it is a Japanese film somehow makes these elements easily forgivable.  However, where this suffers is in its lengthy runtime of 2 hours and having its reveals set too early, making the final half feel dragged out. This lead to the well-developed first half to lose its intrigue quickly in the second half. There are some serious execution issues here that make the final thoughts of this movie feel simply bland and lackluster.

This review is also published on That Moment In.