2 weeks or so has past since the first Gardening 2018 post!

Time sure does fly by. I’ve been working hard on weeding and setting up the garden with what I have so far. There is still a ton of stuff to do but Victoria Day long weekend is the staple weekend where I go to the garden centre and pick up at least my first big haul! This year, I went back to Les Serres Jean-Francois Dauphinais.

This place is still one of my more favorite places to go to. I actually also made a quick stop over at Pepiniere Auclair.

Here’s a lovely mosaic of what I did pick up at the center as a starter and after, we’ll take a look at what I’ve planted and other garden updates as a follow-up from the last post. 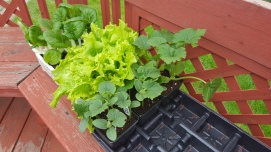 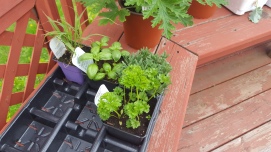 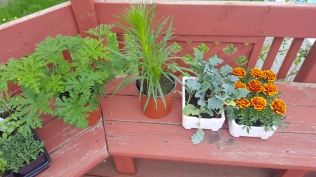 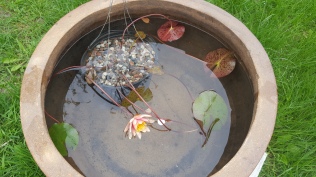 Its the first year that my husband was fully awake to go to the garden centre with me and ended up leaving feeling like he enjoyed it. That is the difference of being on graveyard shift and normal shift (at least for him). It was a very different experience and he was a real champ and kept me company and helped me out a few times with the whole gardening thing. A different experience in some ways. This is definitely just the first batch and the two flowers are the only ones currently not planted in ground yet. We have a few little gardening clean-up areas left but my husband has been working on a few little things helping me open up some more of the garden this weekend as well.

Let’s take a look at how everything looks now! 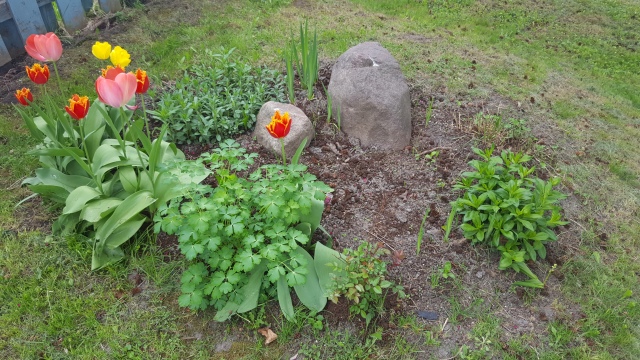 The flower patch in the front yard definitely has grown a lot more since the last update. Amazing what two weeks could do. Crimson Star still doesn’t have any buds so I’m wondering if it will since its already much later than usual. The tulips are all blooming now and giving some beautiful colorful life to my front yard. Once these end, the yellow flowers in the back should bloom if things go well. Aside from that, it seems that my middle area is not coming back so I’m going to be moving something over that has been cramped up in a corner of the garden forever but I just never found a home for it. Update on that next time for sure! 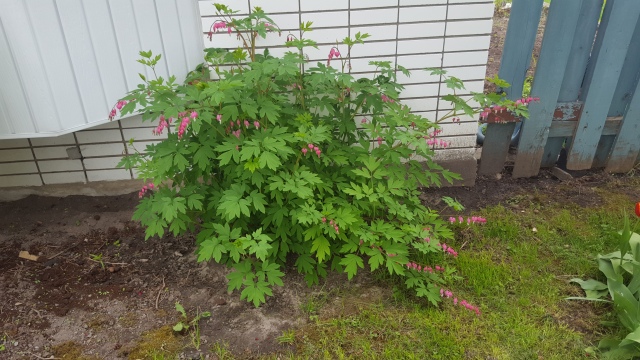 Moving along, the Bleeding Hearts are looking spectacular. I’ll be posting some cool pictures of it over on Avenue of Daydreams over the next week or two. Its scheduled but I can’t remember when. 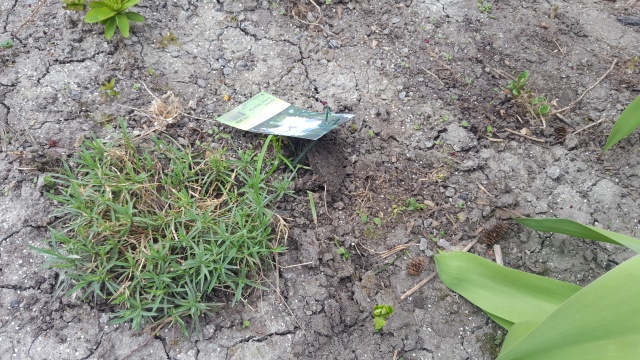 Honestly, this sad patch along the front facade of my house did get a nice trimming and yet again, I forgot to take a picture of it since the last time but the Dianthus seems to be coming back. This patch seems like its not having much perennials come back, however, as I walked around this week, I saw, what I believe is, the cone flowers coming back. Its the little leaves in the top right area. I remembered i had moved one there and it was shadowed by the hydrangeas but this year I trimmed the hydrageans so hopefully it’ll successfully come back. 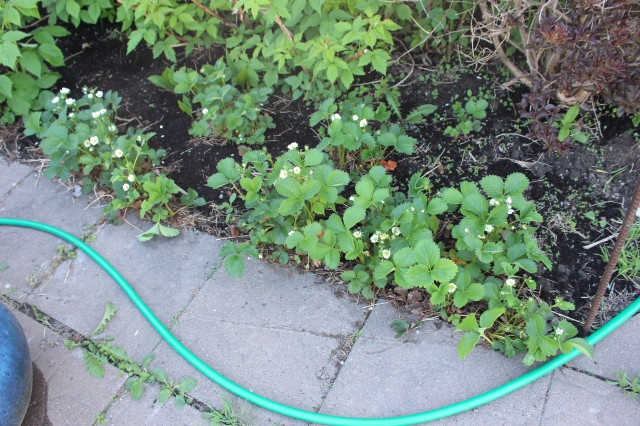 Enough said about this area. Its just growing out of control as usual. The strawberries are getting perkier and stronger every year. There are a lot of blossoms. Hopefully the bees are dropping by to pollinate it. As for the Raspberries, I’m trying to keep it under control but it sure looks like, its not exactly making much of a difference. I waited two weeks and already my lily is hidden in these raspberry shrubs already. 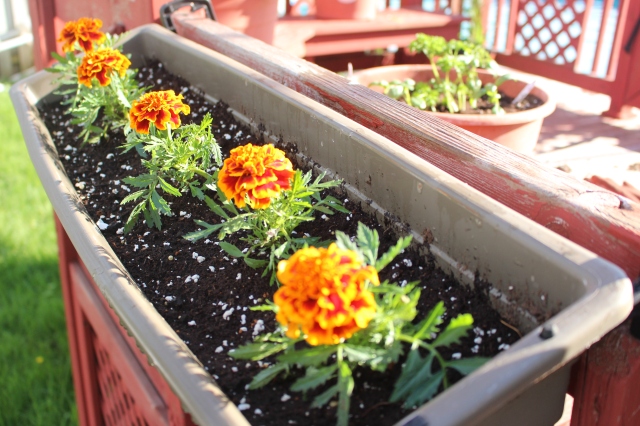 On with the container gardening! We are actually have quite a few of these this year despite saying that we’d have less. As usual, the planter for the ledge of the patio full of marigolds. Marigolds naturally repels mosquitoes so that is the purpose of them being at the edge. Talking about mosquito repellent, here is my mosquito repellent container. 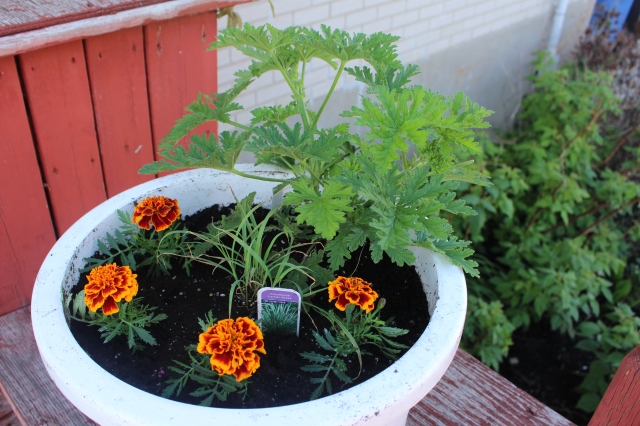 Geranium Citronella, Lemongrass and Marigold makes up for my mosquito repellent container. I read somewhere that if you walk by the plant and brush your hands over it, it will help keep the bugs away. I did it on one arm and it didn’t get me but the other arm caught a mosquito bite. Even if its not effective, it still looks pretty nice. One of my prouder planting moments 🙂 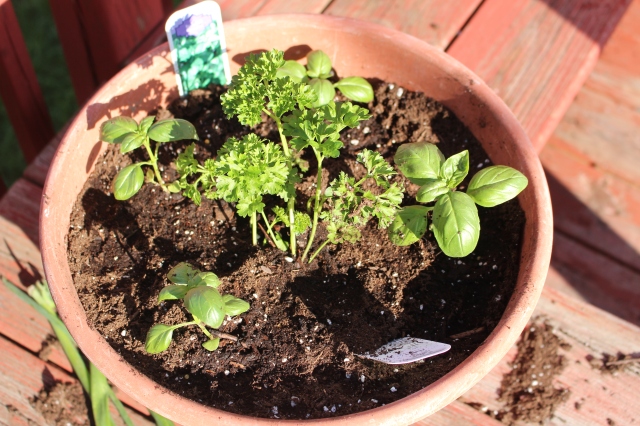 A little change here as well. Usually I get a few herbs and plant them in a container garden. This year, we got the lavender that went into the ground right away (at least I chose to do that), leaving these two so I put them into a smaller pot. I’m hoping there’s enough space but the strong one will survive, right? It’ll make it out! *positive thoughts* 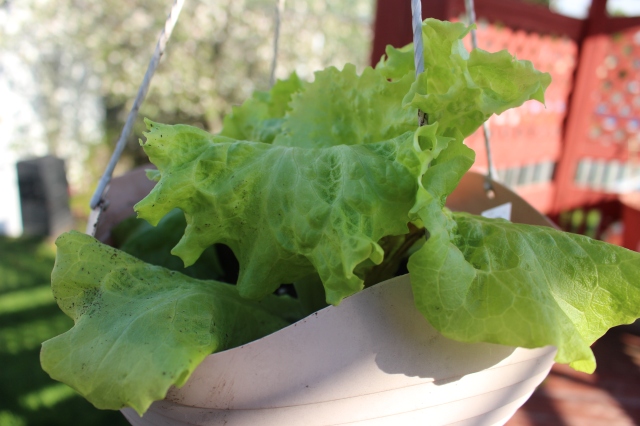 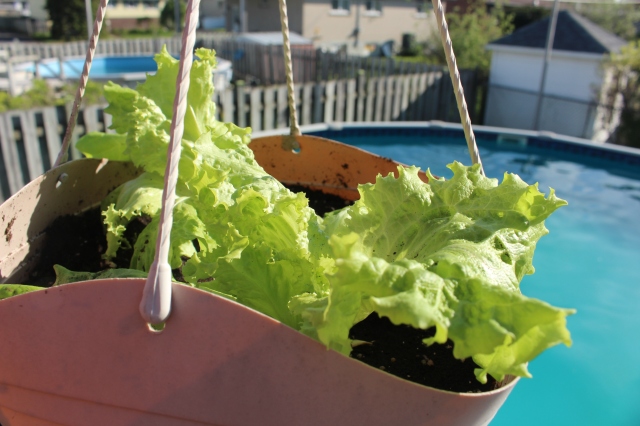 Others may hang flowers in their hanging pots but since 2 years ago, we’ve been planting lettuce in hanging pots and let me tell you, they are quite successful usually. This year, we are changing it up and putting 2 lettuces instead of three. Three always ends up one being scrawny and sad so hopefully two will work out for the better. With that said, the lettuce this year was slightly weak and when I was taking them out, two broke off from their roots. I’m currently trying to revive them in water to hopefully sprout back some roots but don’t know if it will work. 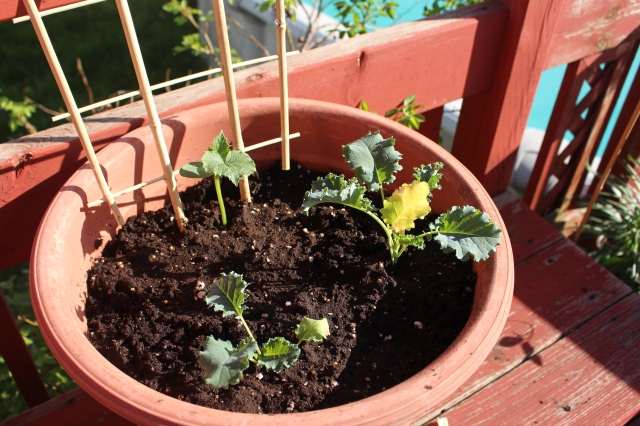 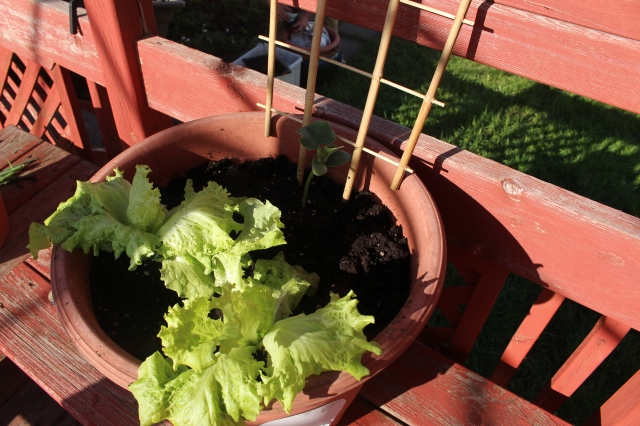 As you can see, lettuce and cucumbers are dominant in the garden this year. With limited garden space as the expansion is still in progress, we are doing two cucumbers in containers this year and I did some companion planting research and paired them up with lettuce. Kale makes no difference so I just put it in since they don’t take a lot of space and we harvest them fairly quickly as we like to make kale chips and cook it. 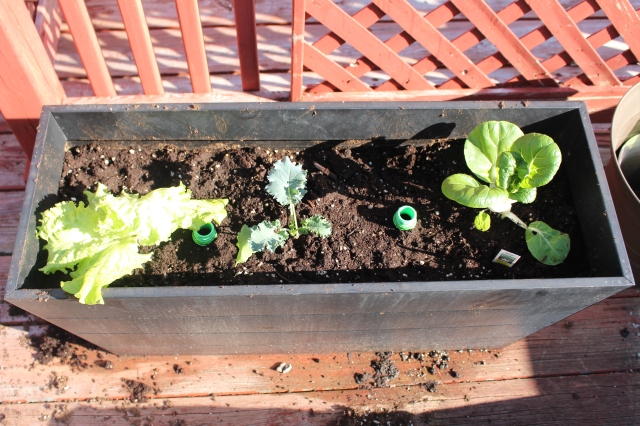 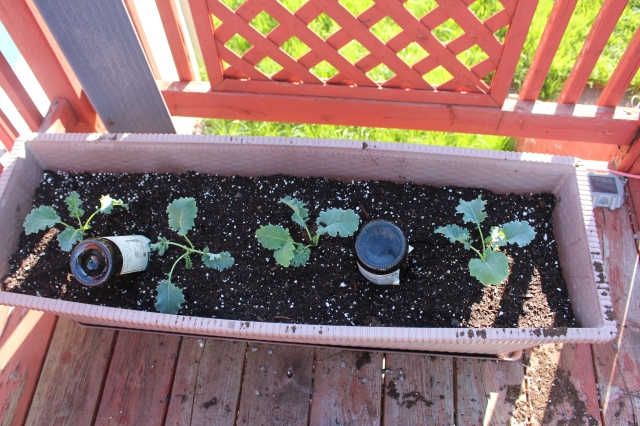 The final two are just individual kale and my variety of lettuce containers. The highlight here is that I’ve rigged the top one with a watering system. To be honest, I don’t think the system works as well. The water goes down a little too fast for it to be useful. The wine bottle method in the bottom is definitely still doing the trick. I’m going to compare the two and see at the end of the season, which works better. Who knows before we observe for a little while longer. 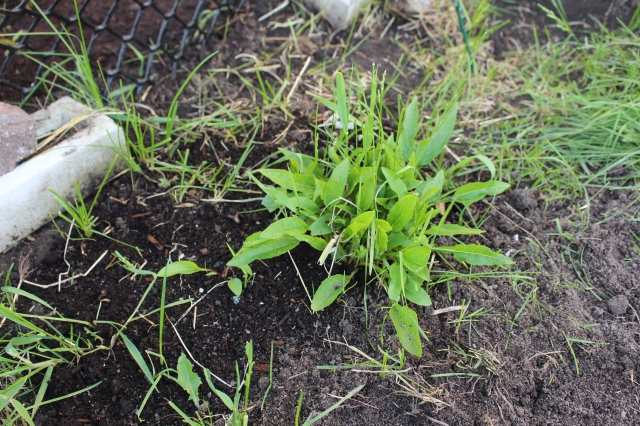 The echinacea is back! I’m really happy about that. I did lose one of them but at least one came back so I’m already fairly satisfied with it. 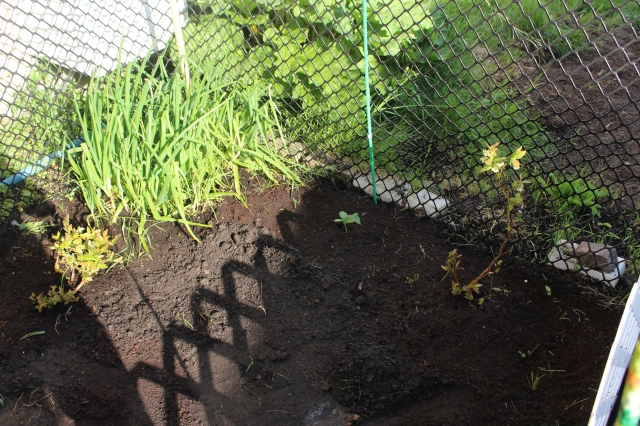 We put up the same fence as we had last year. Its to prevent bunny attacks on my lettuce. This part is the general informal entrance of my patch since you pretty much need to straddle the front trellis to get in. Its not tall but can still be hard to do. As you can see, my blueberries are growing well enough. The green onions are bursting with harvest and there in the middle is a cucumber plant. We needed to keep them near the mesh side and I’ll be getting a trellis to link it to the side. 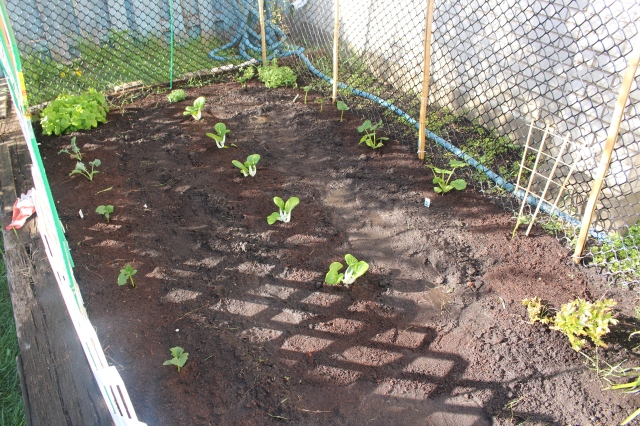 Continuing to the other side and the full extension. The far left is all herbs. Lemon Mint and Oregano came back and in the center, I planted the Lavender. As for the rows, The first row is Marketmore cucumbers and Kale. The reason for this is to swap things around. I’ve planted zucchini in the front for a few years and its normal to change things around to help the soil replenish nutrients. Second row is all the Bok Choy. And the final row is English Cucumbers and Zucchini. 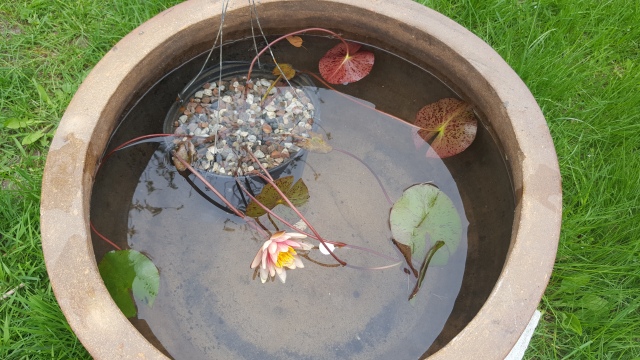 What can I say? I grew up with a pond in my backyard. Water gardens remind me of my dad. A part of me has always wanted a water garden so I made the effort to get a water lily and try to make it grow especially after my mom gave us these giant clay pots last year which was my dad’s. The water lilies was pretty pricey but I believe if you put them under soil over winter, its supposed to make it through every year. My mom is the expert on that so I’ll get more info from her soon.

And that’s it for the garden!
We have an idea of opening up a few more patches so my husband has been helping me a ton with that!
He makes the progress go a lot faster especially when opposite from my scattered mind of wanting to do everything at the same time, he actually focuses on one task.

Still some research! I’ll update with the flowers being planted in ground.
I just want to make sure that I open a big enough plot so that I can see the Clematis and it will give it the best chance of survival and blossom.
And a few moving plants about the garden coming up and pruning of a few trees.

Seems that this Gardening thing will be a biweekly deal as it currently stands.
I’m just a beginner gardener so its a journey all on its own.