Welcome to the next double feature!

I feels like a while since I’ve actually done one of these. If you’ve seen my What’s Up, I’ve actually seen quite a few films just never seemed to get time to write one up. Either way, I needed something light and fluffy so I went to the Family and Children part of Netflix and chose these two on two separate days. Maybe the stress and brain deadness helped me enjoy them more than I would normally would which puts it in a class of their own.

Either way, Minions and Monster Trucks were both movies on my list that I wanted to check out and I did. Let’s go! 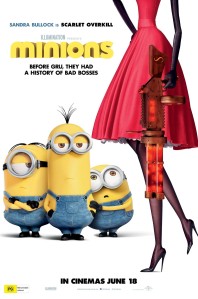 Minions Stuart, Kevin, and Bob are recruited by Scarlet Overkill, a supervillain who, alongside her inventor husband Herb, hatches a plot to take over the world. – IMDB

Minions have definitely made a name for themselves as the silly sidekicks in the Despicable Me movies. The biggest question when this movie was announced was whether they were able to carry a movie by themselves with their random gibberish talk and unknown past. Of course, Minions focuses on this point and gives them an origin story. Why not, right? Everyone is doing it and it seems that they are well-deserved especially since Penguins from Madagascar also got their own film just before (I think..don’t quote me on timeline of movie releases). With that said, while the origin story of Minions does feel a little odd and generic, they are still them. They offer a kind of entertainment that comes with the family entertainment category and works in the world of villains as they represent their group to find a worthy villain to follow and end up at Villain Con.

Its hard to not like Minions. To be honest, I started the movie without a lot of expectations. However, it did offer the entertainment I wanted but with a few surprises along the way such as the excellent voice cast they had for the other characters from Sandra Bullock’s Scarlet Overkill to her husband, Herb voiced by Jon Hamm. While I believe I had learned about those before the movie and I only remembered it when they appeared as they are the main villainous roles here, the big surprise for me was the voices of the Nelsons, a family of robbers that give them a lift to Villain Con where it was voiced by Allison Janney and Michael Keaton. They have such distinctive voices, especially Allison Janney that I knew right away it was her and just loved it. Since we’re on the topic of voice acting, Minions having their own film does highlight their mesh of languages from moments of French to Spanish and probably other ones that we personally don’t know.

Overall, Minions was an entertaining movie to say the least. Was it necessary? Probably not. I still like them more as the Despicable Me sidekicks characters. However, this movie did have a great voice cast for its other characters which gave it a fun touch which worked in its favor a whole bunch. But then, it could be because I like Sandra Bullock and Allison Janney a ton.

A young man working at a small town junkyard discovers and befriends a creature which feeds on oil being sought by a fracking company. – IMDB

Cheesy family entertainment is really what Monster Trucks is. Its pretty dumb when I think about it now but somehow, it still was a pretty fun little flick. Perhaps its because Jane Levy is pretty cool and I’ve enjoyed her films from Evil Dead (review) to Don’t Breathe (review) and its nice to see her not in something horrifying. The story in Monster Trucks is very simple and basic so great for some brain shut off time while keeping very much to the family entertainment as there isn’t any vulgar language or even a lot of romance for that part. The main focus was really on the creature here, simply named Creech by Lucas Till’s character, Tripp. Creech is something of an odd creature that flew out of a fracking operation as they discovered some oil-feeding creatures. There are your normal set of cast of characters as the big bad corporation sends out their meanest hencemen to hunt down Creech so to keep their operations going. There’s the scientist who has had enough of the crappy ways and wants to do good for these creatures. And of course, a little bit of teen romance as Jane Levy’s smart nerdy girl role, Meredith bonds with Tripp over the many adventures with Creech as they hide him out in the broken truck and he runs it with his many tentacles.

Among the action and chase sequences and over the top moments, the true treasure that I loved the best was definitely Creech. It was dorky and hilarious. While it couldn’t talk, it had so many expressions. It reminded me a lot of something like Totoro from My Neighbor Totoro and Toothless from How to Train Your Dragon. The toothy smile and the fascination for doing adrenaline rush things along with its crazy stunts and having so much enjoyment out of it while scaring the heck out of Tripp. The movie was never in the control of Tripp or Meredith, it was all Creech’s show and its that unpredictability that makes this rather generic film have a little heart and quite a few laughs. Its always fun to learn about new creatures and their designs and that is what gives Monster Trucks its uniqueness.

Overall, no, Monster Trucks is not a masterpiece or maybe not even good in many aspects especially in its generic storyline. However, its creature Creech is the star of the show and along with some cute and clueless moments between some of the characters, it makes some harmless family entertainment with some laughs and simplicity.

That’s it for this week’s family themed double feature!
Have you seen Minions or Monster Trucks? Thoughts?