I reviewed Pete’s Dragon for the Ultimate 70s Blogathon as part of a double feature, but I never do double features for Disney films due to the segment I’m working on for Baking Through Disney. Baking is going to happen soon but meanwhile, I will keep these Disney film reviews going as I get back into the baking routine. I will however jump right back to watching the movies in order of release starting the next one, which should be Bambi.

With that said, let’s check this one out. If you already read it in the double feature, its the same one posted again here with slight additions.

An orphan boy and his magical dragon come to town with his abusive adoptive parents in pursuit. – IMDB

Mary Poppins opened up a world of blending animated characters with real characters and to be fair, there’s a few segments in Pete’s Dragon that calls back to it, particularly the song and dance of I Saw A Dragon which has somewhat of a Chim Chiminey where the bar replaces the rooftop choreography. Its amazing how its taken so long to catch up with Pete’s Dragon and really not know too much about it. Pete’s Dragon is a fun little adventurous tale filled with friendship, family and packs in a decent amount of laughs and emotions, along with a lot of nice musical pieces. 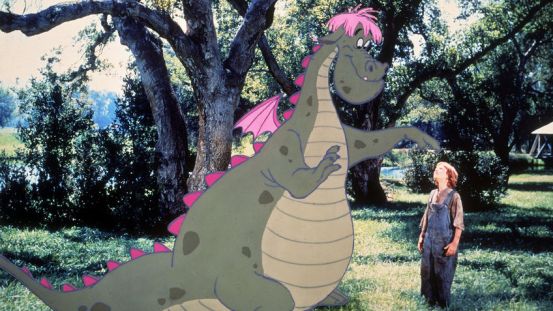 Being a fan of Mary Poppins, the appeal of Pete’s Dragon struck me almost instantaneously especially when Pete’s Dragon, Elliott is around quite a bit and he is designed fairly friendly with tufts of pink hair and wings contrasting with this green body which actually makes Elliott one of the most charming parts. Pete and Elliott’s friendship is an odd one and its also why for a good part of the film, no one actually believed him and took Elliott as something of an imaginary friend sort of deal, which of course, it wasn’t. In fact, Elliott actually parallels a little like Mary Poppins instead he is a dragon that helps kids in need and then moves on when his job is done. Which is pretty much what Mary Poppins does but she is much more there. Drawing comparisons to Mary Poppins a lot here because there was a strong sense of similarities between the two, however, being similar to Mary Poppins is a not a bad thing, in fact, its what makes Pete’s Dragon so much fun to watch. 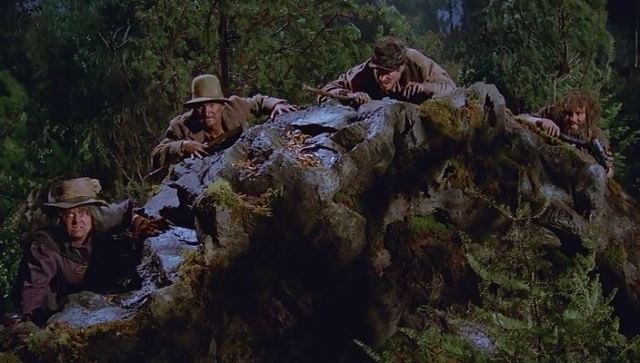 There is also a variety of other characters. The first being the lady who takes Pete in in times of need with his somewhat eccentric drunk dad who gets into a ton of shenanigans. The dad is played by Mickey Rooney which is quite a funny role. Aside from that, there are the bandit family who are the supposed adopted family of Pete who pretty much tries to capture him back so that he can be their slave. These guys are like the odd and somewhat stupid family who is trying to be mean. It is quite suitable for kids because perhaps for kids they will feel somewhat scary but we all know that they are never going to feel too threatening. And then, finally there are the con artists in the magician or healer character who travels around with his cures with his sidekick. All he cares about is money and he turns into the guy who tries to get Elliott. Because of both the dangers to Elliott and Pete, we can see their friendship as well as the adventure part be fit in tightly into this story and it works to its advantage.

Pete’s Dragon is filled with musical segments. It definitely has a lot of really catchy songs. Some energetic and others soothing to listen to but all in all, rather positive messages all around. In fact, I’d like to think that Pete’s Dragon takes a look at finding a place to belong and not losing hope for a better tomorrow. Its a hopeful film and one that teaches a lot about friendship and just emotions in general as Pete leaves for the big world and faces the situations no matter how scared he actually is about not finding someplace to be and what to expect next. And that is essentially what makes Pete’s Dragon a nice little family film.

Now that I’ve seen the original, I wonder how the 2017 version would be especially probably with CGI for Elliott although I do think that part of the charm of the film was the drawn animations for Elliott.