And the first of my list of anticipated movies for 2018 was released as a surprise Netflix launch after the Super Bowl. To see what other movies made my 2018 anticipated list, check it out here. We did watch The Cloverfield Paradox that night and it definitely reflects on the backlog that it took this long to share my thoughts on it now. Lets check out the third movie in this Cloverfield universe.

Orbiting a planet on the brink of war, scientists test a device to solve an energy crisis, and end up face-to-face with a dark alternate reality. – IMDB

The Cloverfield “franchise” (since there is only two other movies) has taken its viewers for quite a ride. To be honest, they benefited the most from a very strategic surprise and mystery sort of promotional campaign which keeps its audience guessing and the intrigue and anticipation is what drives most of it. I’m a fan of both Cloverfield and 10 Cloverfield Lane. Both had its issues but were entertaining and effective for what it tried to do. Of course, to link the two universes together was where it does fall apart a little. In this third installment of Cloverfield, The Cloverfield Paradox takes us to space with a bunch of astronauts who are trying to achieve a risky experiment that will essentially save Earth’s energy crisis. Just looking at the summary above, it already highlights some of the generic elements that you can expect in The Cloverfield Paradox. During the movie, elements of Event Horizon and Evil Dead will definitely be comparable here. Is that a bad thing? Not necessarily as long as its executed well and for the most part, The Cloverfield Paradox is action-packed and suspenseful with hints of humor here and there and visually, its pretty lovely to watch. Is it a ground-breaking or memorable movie experience and lives up to the hype? No, it really isn’t. I watched it about a month ago and honestly, its starting to fade away. It did however make me want to revisit Event Horizon, a movie that has a criticism but I personally love a lot. 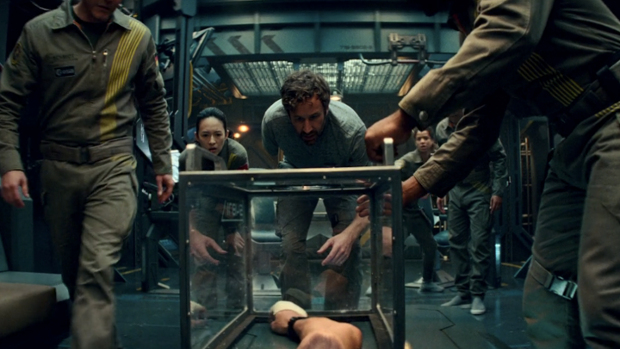 While the story and direction worked okay, despite its familiar territory, the cast here also portrays some very generic qualities of a space crew. There are a lot of familiar faces and to be fair, they all did a great job in their roles, even Ziyi Zhang (who I’m not a huge fan of). Chris O’Dowd provided the humor the story needed along with some of his banter with other characters. There was suspense and mystery surrounding some of them as well which kept it intriguing. There was drama particularly in the main character, played by Gugu Mbatha-Raw, who delivered a nice performance. However, the problem was that the short run time and the pacing of the story gave these characters a lack of depth. We never had enough time with any one of them to make it feel remotely connected to sense a loss when they were in peril. The story itself kept it action-packed and constantly propelling it forward with accidents, deaths, dangerous situations, mystery, suspense and it was all over the place keeping the audience on its toes but somehow where it fell flat was the characters. I did like the international aspect of the characters because it had constant foreign language and some subtitle reading which kept it authentic. 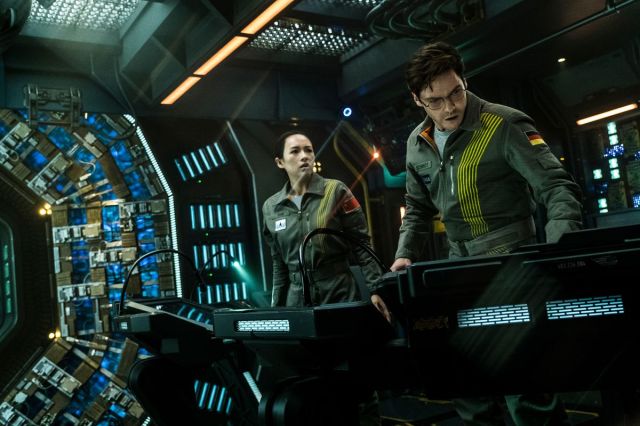 At this point, we have to look at The Cloverfield Paradox and how it fits into the franchise. If we talk about self-contained, well, this franchise is definitely self-contained since the connection sometimes seems like a rather far-fetched idea. It felt the same way with 10 Cloverfield Lane where the final part that somehow supposedly links back to its first movie was where I found it at its weakest. The same applies here, in fact, The Cloverfield Paradox is definitely the weakest link so far. It lacks an original story and lacks powerful characters. In terms of depth and connection, it actually just adds more questions to the whole Cloverfield world. At this point, the Cloverfield franchise is really just an anthology series with movies set in the same universe. Its not necessarily a problem but something more about this universe would be nice. I mean what is this universe afterall? When are these films set? We can assume that Cloverfield is the first film where we see these creatures or aliens invading the world. The world’s fallen apart in 10 Cloverfield Lane and definitely in The Cloverfield Paradox. What is the timeline though? You know, its nice to tease and play the guessing game and they have a strong promotional campaign team but at a certain point, it stops being fun and starts being just frustrating to follow, especially when if The Cloverfield Paradox is the commencement of the downward spiral in its quality.

There are obvious entertaining elements of watching The Cloverfield Paradox. I didn’t hate it but thinking about it more, it felt quite shallow. They had a good cast that delivered good performances, a generic story that was visually done really well but still was very predictable and it had a mix of genre elements of riding between being serious and funny. However, The Cloverfield Paradox could have been any old sci-fi movie if it didn’t have the Earth segments. There are entertaining and tense, suspense-filled elements that work in the thriller world. Its decent for a one shot watch but honestly, it was a disappointment from the expectations after the first two films. I sure hope that if the Cloverfield world continues, it will take some time to try to find a more apparent link in the universe and add a little more substance.