The final movie rental we watched during the holidays save for one around New Year’s Eve (which the review is coming up) to try and catch up more with 2017 is 47 Meters Down. No brainer really why I picked this one. I really love shark movies. There is no particular reason other than I find them endlessly amusing for the most part. There are some exception to the equation so let’s see if 47 Meters Down works or not. 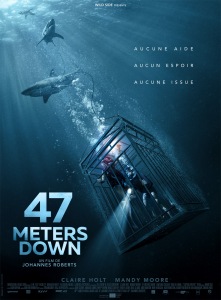 Two sisters vacationing in Mexico are trapped in a shark cage at the bottom of the ocean. With less than an hour of oxygen left and great white sharks circling nearby, they must fight to survive. – IMDB

At first glance, 47 Meters Down ticks a lot of the boxes that I love and fits right into what I enjoy. Sharks, destination vacation, sisterly bonding, tension, water, shady characters, Mandy Moore and Claire Holt: all people and things that interest me in a movie. Being trapped underwater with limited oxygen is a perfect setup for a shark film. It will build tension, and create suspense. There’s an unknown factor from the deep blue sea that blocks out the ability to detect the predator making them even less predictable.

In fact, 47 Meters hits a lot of those boxes. It manages to create the hunting and trying to escape outside of the cage bits very tense. It uses light and dark of the sea very well and teases your expectations a little as well. This lets the dread set in as we sit in anxiety with the sisters trapped underwater as they have to decide when to fight for their lives and when to stay put. To be honest, I don’t know enough about scuba diving or swimming with the sharks to know how authentic this entire ordeal is so I took it for what it was. Of course, if I was to get into a rusty looking cage to sit in to look at sharks, I probably would say no, but that’s just because as great as the idea sounds, I would probably want to join an operation that didn’t look as shady as the one the sisters, Kate and Lisa decided to go to, especially in Lisa’s case, lying about knowing about scuba diving. My point is that in creating tension, 47 Meters Down does a great job, especially in finding a way to also give us something to think about. 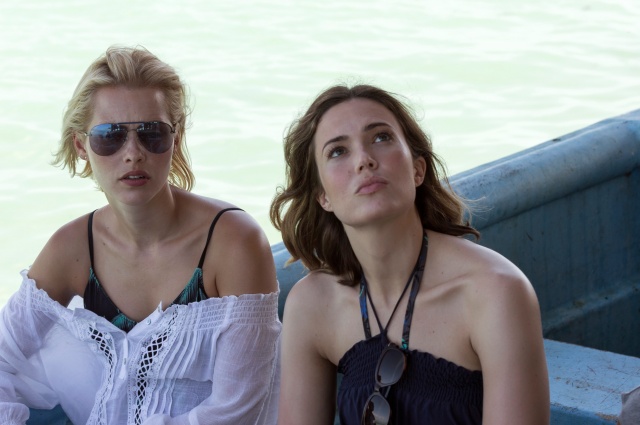 Putting the fact that I chose to believe everything here and pushing aside my lack of risky adventure, 47 Meters Down does also fall short in some places. In particular, it all dials down to some clunky dialogue. I think the sisterhood bonding thing was destined to happen as they saw their differences and their expectations. Mandy Moore and Claire Holt delivered good performances. But the dialogue and just sometimes how they decided to do certain things and reasoned the logic of their next moves made it feel very hard to fight for them. For sure, these decisions did lead to some intense scenes but at times, it felt a little deliberate.

As a shark film, 47 Meters Down does a lot of things right from building the atmosphere to having competent shark predators and a premise that helps build the tension of the film. However, some of the characters decisions or perhaps in general their reasoning does leave a little to be desired. These decisions do all pile up to whether you have connected with them and remain hopeful that they’ll make it out of this ordeal as they fight for survival. What does make up for some of its flaws is a thoughtful ending that gives us something to think about.