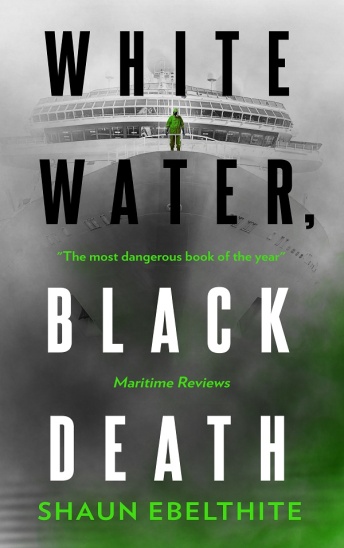 “A cruise ship is the perfect target for a biological attack”. These are the chilling words emailed to the Seaborne Symphony in the mid-Atlantic.

Magazine editor Geneva Jones has been sent on the trans-Atlantic cruise to help secure a major advertising agreement from the CEO of the cruise line Rachel Atkinson, but her efforts to win her over are curtailed by a mysterious crew death. Geneva suspects foul play. Rachel insists its suicide. A former investigative journalist, Geneva can’t resist digging deeper, but what she finds is far more devastating. There’s an Ebola outbreak on the ship, everyone is trapped aboard and Rachel is trying to keep it secret.

Geneva knows enough about Ebola to be terrified, but she’s also onto the biggest story of her career. As panic surges through the ship, she becomes fixated on a single question. How was the virus brought aboard? The answer is worse than she could have imagined, and the greatest exposé she’ll ever get, if she can only prove it.

White Water, Black Death is a very well-written suspense thriller that takes its readers for possibly one of the most dreaded cruise experiences anyone would think of. It takes us for a thrilling anniversary cruise with many twists as it starts off with a suspected murder which turns quickly into a mysterious deadly epidemic that spirals worse and worse. The story is told using the measure of days past on the cruise and the time stamps of the different events which helps with feeling more immersed into the story. The structure fits well. However, White Water Black Death does start off a tad slow as it sets up its characters. At the same time, the characters are a little overwhelming in the beginning as well as there are a lot of characters that eventually do play key parts in this thriller however most don’t truly feel like any that you can get behind as they are developed to be quite horrible people. For some other ones, the vast amount of characters do have a slight impact on having some underdeveloped characters. However, it does a great job in specifically choosing a few characters to focus heavily on to drive the story forward.

Thrillers (both books and movies alike) thrive on its mystery and building up a scenario that intrigues its audience to piece together its story in its final reveal. White Water Black Death achieves that very well. However, the only criticism is to have hidden the entire Ebola outbreak part in its synopsis because it takes away what the mystery of discovering what had hit the ship in the first place and makes the whole set-up to figuring that out  lose its mystery. The author does a great job and building that mystery and it feels a shame to have it revealed before the reader even starts the novel. Part of my enjoyment of the book came from not having read the synopsis in advance and only knowing the bare minimum. White Water Black Death is a page turner and as a thriller it delivers with its incredible delivery to structure a story that achieves both building the suspense and creating vivid and effectively descriptive scenes that truly help visualize each moment especially when the situation intensifies, making it a gripping page-turner.

Overall, White Water, Black Death is a great suspenseful thriller that does a great job and building its story and pieces to make it both an intriguing and gripping reading experience. While it falls short in a few places, it still works effectively and incredibly well.

Shaun Ebelthite was born in Namibia, raised in South Africa and educated in Dubai in the Middle East where he is a maritime and cruise journalist. He has been covering all aspects of ocean transport for more than five years and runs the Middle East’s foremost online cruise magazine. He has had two children’s books published, and is now branching out into a new genre with his first thriller.