It’s time for another Stephen King adaptation! We’re finally looking at the 1990 miniseries IT which I’ve never seen before today. Perhaps a good way to justify why I haven’t is that I have a GIGANTIC fear of clowns. I can remember exact moments of being a little girl and the clowns that scared the heck out of me. However, I watched this one to have a comparison with the new IT movie that had hit theatres earlier this October and that review will be up tomorrow. Unfortunately, I’m still working on the book.

Let’s check this out!

In 1960, seven pre-teen outcasts fight an evil demon who poses as a child-killing clown. Thirty years later, they reunite to stop the demon once and for all when it returns to their hometown. – IMDB

This miniseries turned out to be quite a lot less scary than I imagined it. Its probably because it didn’t age well and Tim Curry brings that very comedic clown feeling even when he gets his sharp fangs out. It originally aired in two episodes. The first part was focused on the kids and the adults heading back to Derry on a promise after their friend calls them back and the second part focuses on the adults who now need to face the reality of the reoccurence of the terror that has struck Derry again and how they plan on dealing with it. This is a long piece with the two episodes combined of over 3 hours. I guess that isn’t so bad considering we frequently get 3 hours blockbusters (close to it) so its doable to just watch the whole thing in one sitting. IT is a pretty good time to be honest. The ending is a little lackluster and I’m wondering if the actual book ends the same way.

Part 1 is definitely the highlight of the movie where we focus on the kids and shape how they’ve turned out as adults as we take a peek into their lives. All the actors are quite good and there are a few familiar faces. Since this was made for TV, there are some parts that were taken out and modified which makes sense to me and for the most part, it still flows pretty well. What makes the first part intriguing is its familiar structure to the source material which helps us not to only see how the story started for each of The Losers but also how they became friends and also to see their characters at the same time. The Losers each had skills and added individually to the story and the group. The kids here are very believable and they hold a naive sense to them despite their struggles. 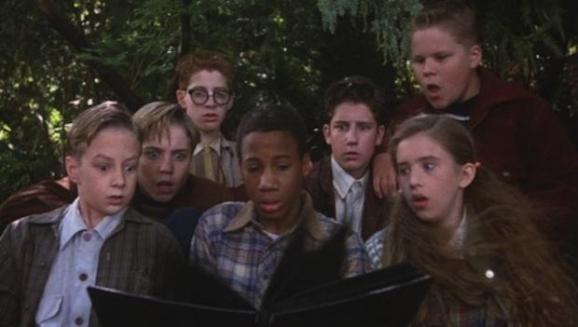 Its length here has its pros and cons. For one, it allows it to stay more faithful to the source barring the moments that may be too much for general TV audience. The con however is that when the story isn’t moving, it feels like a bit of a drag. However, those are fairly rare moments. IT also uses its length to give more substance and create more of the moments. The effects are definitely dated but it is to be expected in a 1990 film however, it still is quite entertaining. 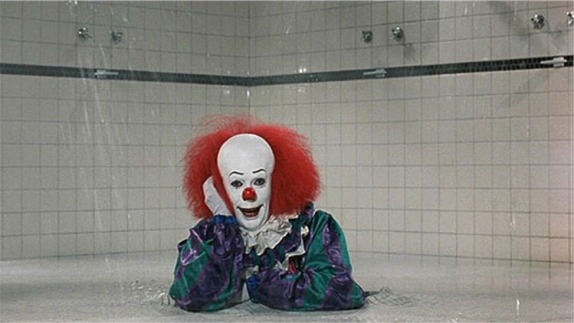 Tim Curry has taken on a lot of daring roles and some not so much. It really depends on what tone wanted to be created here. Pennywise is what will bring in those creeps as he is the villain. While Pennywise is quite entertaining and  clown-like with a slight darker edge, he or the tone of the mini series never manages to get into the horror elements well. Perhaps it is the first viewing being now that I feel this way and that if I saw it back in 1990 (unlikely since I was 4 and all I watched was Mr. Dressup and Ghibli films) that it would have scared me a lot more. The scenes had its intentions of being scary and creepy but it never sinks in.

Overall, there are some great elements here however, to say this was a scary movie experience would be inaccurate however, it is still very entertaining and has its moments. Tim Curry’s Pennywise also delivers a good performance.