We continue our horror marathon with the next Saw entry, Saw III. At this point of the franchise, I went into this not exactly sure where it will go. The second one was lackluster and the first was really good. However, this is still at the helms of the sequel’s director so lets just say expectations weren’t particularly high.  Let’s just jump right in!

Jigsaw kidnaps a doctor named Lynn denlon to keep him alive while he watches his new apprentice put an unlucky citizen named Jeff through a brutal test. Lynn has to keep jigsaw alive until Jeff completes the test or else Lynn will die – IMDB

Saw III takes a turn with a really different vibe. At this point, if you haven’t read the last two, this one is going to have certain spoilers relating to the flow of the story. In the previous one, we’ve learned that Jigsaw has an apprentice in the one girl that has escaped in the first one, Amanda Young. Jigsaw is on his death bed and both him and Amanda are trying to keep him alive in this last elaborate trap/redemption for a man who has lost his child and lives in mourning. However, Saw III takes a different approach as it has very much a more gory and disgusting choice in its scenes than the first two. There are some truly gut-wrenching scenes in particular one death scene. Saw III so far is the weakest of the three so far in the franchise and that comes with somewhat of a lackluster build-up even if its ending tries very hard to be clever to link back events and characters to make it find its worth.

Saw III, like the previous ones, takes us on two primary storylines. One is of Jeff and the other of the psychological battle of the doctor kidnapped to try to make sure Jigsaw survives. Since I enjoy these Jigsaw bits more and through his conversation, understanding his character a little more, this part is the stronger part, however, it does feel so pointless at parts because it focuses on Amanda Young who seems to have this toxic relationship with Jigsaw (but then, Jigsaw is a pretty toxic character with some warped sense of life), whereas she seems to be a very extreme character leading her to some of the tense moments while seeing how she is also weak. In fact, Shawnee Smith does a decent job at this character. The fault might be in the writing being slightly convoluted in showcasing her character as Amanda Young. 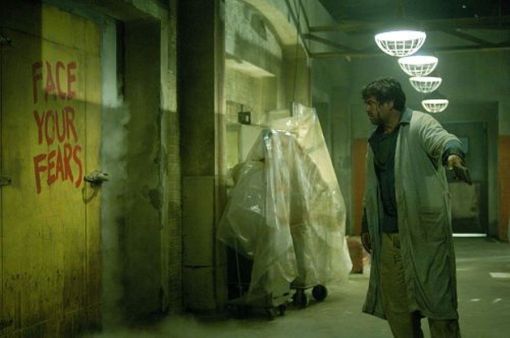 On the other hand, Jeff’s storyline leads us to most of the gory parts as he needs to face one obstacle after the next. These obstacles are truly a psychological battle as Jigsaw tests his stubbornness of holding onto his grief and not letting go to continue to see what he has and be grateful for those things. It all seems like such an obstacle because in the first one, there is  a connection for the people he’s captured. This one, we wonder why he’s captured him. I mean, Jigsaw is a pretty intricate man. He picks his victims with purpose. Instead, here we see a lot of pieces lined together from the opening scenes and such to picking Jeff. Of course, Jeff is a character that is battling with his own emotions however, it feels so dull to keep watching him go through one person to the next that could have been responsible for his child’s death not having justice or treated correctly, etc.

To be fair, Saw III does pull the story together at the end. Just like the second one, the ending is its strength however, it hardly justifies the very lackluster beginning and middle sections that only try to make us wonder in dumb dialogue and gory and disgusting moments. Saw III is one that I didn’t enjoy a lot. It had a clever ending and for that, it did take me by surprise slightly although at a certain part, I had started piecing everything together. However, it is my least favorite till now.

That’s for for this review! Did you see Saw III?
Saw III makes worry about where the next one will go. At least there’s Scott Patterson, right?