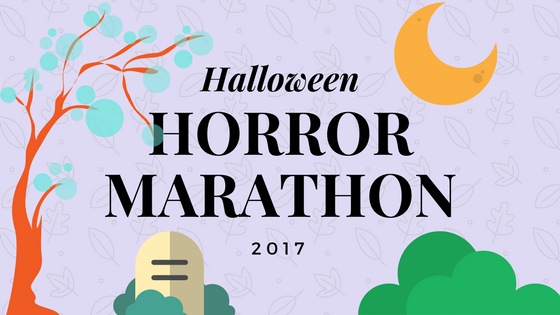 Another year sure passes by fast! 5 years since I’ve officially hopped back into the horror scene! For those who don’t know, I had stopped for a while from horror films mostly because I’m just a major scaredy-cat and almost anything scares me. My husband scares me occassionally just by walking up when I’m working. Jumpy? That I am. Anyways, the break was needed and in 2012, I decided to hop back in and man, has it been a fantastic journey. Most of my horror films now are seen in this month or during Fantasia Festival in July. And then its incredibly scattered throughout the year mostly whenever I feel like it, which isn’t too often because its a whole new challenge to figure out what horror subgenre I’d like to watch and then deciding on the film. Okay..stopping the rambling.

In the last 5 years, we’ve done a lot of the big franchises: Nightmare on Elm Street, Halloween, Friday the 13th and even did Scream and Evil Dead last year. So, what next? The contenders for this year went from Hellraiser (which was abandoned because apparently one or two of the Hellraiser sequels are impossible to find) then Final Destination (which I heard is pretty disgusting) and finally, the final final decision is THE SAW FRANCHISE! Barring the last movie that will open in October because I’ll be swamped at work at that time frame so we will be looking at 7 existing movies!

Alongside that will be a few book reviews, TV binges and of course, other movie selection. I had a head start this year so some absolute ones making an appearance will be Ash vs. Evil Dead Season 1 TV Binge for example. In terms of books, IT is being read but its taking a long time so I fill in the breaks with Horror Movies A Day. Hopefully that might inspire some of the movie choices if I can find them. As for movies, The Autopsy of Jane Doe review is coming up.

Those are just three (or four) entries that you will see. Add in the 7 from Saw, we still have a lot of empty space… You know what else I’m doing which is incredibly overdue is to watch George A Romero’s films. We can’t afford to buy any ones that we don’t own so we have 3 more selections that will be reviewed. All first time viewings! I think it’ll be fun and interesting 🙂

So we have close to 15 entries set along with some random posts like Music Obsessions, My Weekly Adventures and such. The rest will be surprises as I haven’t started them yet but hopefully, they’ll all get some love. I’ll try to pick from Netflix and my unwatched physical copies.

As usual, if you have any suggestions, please do tell me what you’d like me to watch and I’ll try my best to see if I can access it. However, if you do suggest, you can check out if I’ve reviewed it before right HERE. At the time you are looking at it, it should be updated till the end of September!

See you all tomorrow for the first entry as we kick off with the review of Saw!