Let’s take a break from Fantasia Festival madness and get  a book review in! You may  not need it, but I absolutely do! 😉

Gemina is the sequel of Illuminae, the first book of The Illuminae Files (as you can see in the cover below). I read Illuminae earlier this year and totally loved it. If you want to know why, you can read all about it in my review HERE.

Gemina
(The Illuminae Files 02)
by: Amie Kaufman and Jay Kristoff 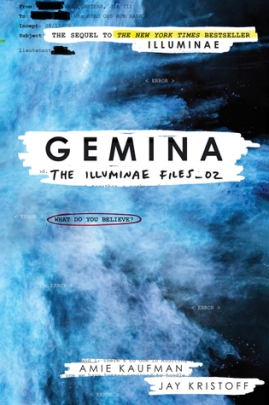 When an elite BeiTech strike team invades the station, Hanna and Nik are thrown together to defend their home. But alien predators are picking off the station residents one by one, and a malfunction in the station’s wormhole means the space-time continuum might be ripped in two before dinner. Soon Hanna and Nik aren’t just fighting for their own survival; the fate of everyone on the Hypatia—and possibly the known universe—is in their hands. – Goodreads

Gemina is an exhilarating ride. A fantastically amazing one. This author duo has truly created a writing style that works truly remarkably. Presenting the story through dossiers and recordings are amazing. In fact, I remembered talking at the end of the review of the first book.avoit how it was hard to make that one into a movie and I was honestly disappointed in that choice. On the contrary, Gemina is so descriptive making everything so vivid that while it will be hard to live up to the images of everyone, with the right director, this one could be a fun ride. It might be because it embraces Die Hard set in a dystopian future in space and adds in am an Alien theme with their creatures. The idea is that they can take the first book to have enough success to get this one made also. I’m a little more excited about the idea.

What works for both of these books is how they choose to lay it out. The different recordings and files give you juat enough to understand what is going on but also leaves gaps and blindspots as to what is going on behind the scene and that creates mystery. Continuing after the first book, this hops onto another space carrier and with new characters, however having still managing to comnect to the characters in the first book. That is important as it gives a continuity to the story. It makes the readers care about this world because the new pair of characters are every bit as intriguing to read as they come to life also, two very different people from the first but still with equally intriguing stories that make them survivors but also human. Hanna and Nik are two acquaintances wrapped up in a lot of stereotypes and prejudices towards each other and grow to see each other more.

Its amazing how the Illuminae Files series has embodied so much. Other than the characters, it definitely feels like there is a lot of unanswered questions. The virus in part one, the creatures in part two, the secret agenda from Beitech: the main question at the end is a lot of why’s. Hopefully we will get the answers soon to pull everything together in the third book.

Overall, I love Gemina. There’s so many great things about it that makes it incredible. Not quite as mindblowing as Illuminae however still very awesome.