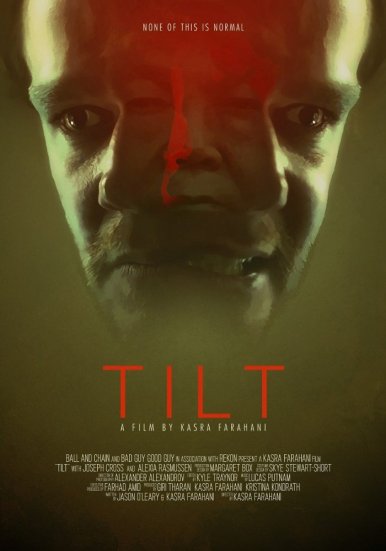 A mind’s control over a chaos. Tilt is a movie about exactly that. Also, it stems from possibly the main character, Joe’s first documentary called Tilt and its tagline about control and chaos and skill in regards to pinball which could easily be carried forward to how we watch him slowly spiral towards his urge of becoming someone that he doesn’t recognize. The best way to describe Tilt would be a slow-burn character study of a person who slowly changes as perhaps their subconscious desires take a path they try to resist.

Tilt is an interesting one. We love horror thrillers and slow-burn movies and honestly, those types of movies are possibly the hardest to get right. Tilt does a decent job at setting up the stage. The technicalities from sound design to production set to the cast were done very well. It was captivating in parts and intriguing in others. Tilt’s first and third act were all of these things, wrapped up in a lot of questions and slowly gives the audience pieces to put together and wonder whether our main character Joe, played by Joseph Cross, will eventually spiral to. Where the film may fall a little short is in the incredibly dragged out second act that we can understand the purpose of watching our character, his observations and his resistance come into full force however, it also was a grinding experience to get through falling into the tedious territory for a few brief moments. What does redeem this movie is the unknown and the unsaid. Things happen and we can only wonder and link and imagine some, (at times) disturbing ideas.

It is hard to do a film like Tilt where it combines the thriller genre with a character study. For all its intrigued and ideas executed well most of the time, perhaps one of the harder things to invest into would be the characters themselves. The cast did incredibly well with how these characters are scripted, particularly our main couple, Joe and Joanne. We see the stress and the sacrifices and the tears that the pregnancy and upcoming addition to their family has caused. Perhaps this is what causes these issues to arise subtly in Joe’s personality as he spends many hours by himself.  However, as impressive as Joseph Cross and Alexia Rasmussen portrayed their characters, it is hard to be rooting for any one of them in particular. Perhaps that isn’t the point because it does feel like these characters were created to not truly be likable as they struggle with this new stress that has entered their lives as they have to face a new reality.

With that said, Tilt does a lot of technical aspects right. The scenes, moods, atmosphere are done incredibly well. They help create that sense of fear and dread as well as danger and intrigue. The script itself tells just enough to make us wonder and link things but never truly know if our guess is correct or not. That is what makes a thriller fun as the finale pulls together masterfully. It has some disturbing scenes and ideas and all this is thanks to a great performance by Joseph Cross. However, the downfall of this film lies in characters we can’t seem to get behind and that make sit harder to truly feel invested into their outcome and also a second act that could’ve been perhaps executed a little better in various parts. Not a perfect thriller, however one that executes many things well enough to deserve a watch.