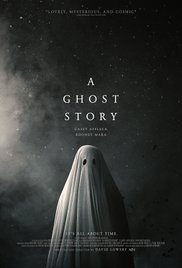 In this singular exploration of legacy, love, loss, and the enormity of existence, a recently deceased, white-sheeted ghost returns to his suburban home to try to reconnect with his bereft wife. – IMDB

Perhaps one of the first things to start off is that A Ghost Story is not a horror movie. It shouldn’t be expected to be one as it is a fantasy drama. David Lowery crafts up a passion project that brings to life an old perception of a ghost covered in a bedsheet who lingers for their loved one in the background. This character may seem like a goofy concept and the movie may have its quirky moment however it isn’t meant to be funny. A Ghost Story is a slow burn movie, more than possibly anything else you will encounter. It has lingering shots before it switches, teasing the audience perhaps to expect something to happen that often doesn’t. It has almost no dialogue but focuses heavily on its soundtrack and its subtle noises in the surroundings. It doesn’t give the characters any names which creates a world where we see only this ghost, a ghost of a husband who has come back to console his wife however not making contact but stirs up memories throughout. A Ghost Story is for those extremely patient because this movie may make you wait for things that won’t happen and answers that you might not get. It seeks to dig a little deeper and expands farther than its star-studded main characters, Casey Affleck and Rooney Mara. Whether the slow-burn works for you or not, this is an odd but unique experience. One that makes you question where the line falls for the audience between tedium and depth.

A Ghost Story is shot in an almost square aspect ratio. Its something that native moviegoers may notice right away. However, what the movie lacks in dialogue is greatly made up by the perfect cuts and transitions between scenes. The ghost moves at a slow pace and frequently shots are taken from his slow movement as he enters a new room or observes something different. He may simply turn and the scene will change. All this is done slowly and seamlessly. The first part of the film focuses on the husband and wife relationship and the love and loss as well as the moving forward and holding on in two people. Despite the silence, we feel the connection between these two characters in the pieces scattered as the time moves on after C (played by Casey Affleck) dies in a sudden accident. There is a great use of time moving forward particularly in the fluidity of creating a scene where M (played by Rooney Mara) goes day by day, carrying on with life.

This fluidity of transition shifts through time as the story turns to a second act of various future tenants. While the technical scenes work well, the second act moves forward and we can only wonder how David Lowery will wrap this story up and how do you end something as random as the scenes he has linked together. This question will lead the audience straight to the final act which unfolds what can only be described as a masterful story writing that somehow does lead this story to giving us a lot of the answers that we’ve been wondering with the bits and pieces.

A Ghost Story is not the conventional way to make a movie. In the final Q&A session of this movie, its apparent that this project turned out as he would like. The slow pace, the sound design and the voiceless and nameless man under the bedsheet all serves its purposes. However, this is an incredibly experimental piece that is definitely not for everyone. Its for those with incredible patience, especially when this movie requires a few minutes watching someone eat pie, as well as attaching to a bedsheet ghost, that will oddly seem to start feeling like they are emoting by just standing there and the camera angles.

For what this movie accomplished, it is one that gets better the more you think about it. It is also one that best seen with as little knowledge as possible. The best movies create discussion and it certainly feels like this one will have that kind of impact.