Fantasia International Film Festival is in town (aka Montreal)! 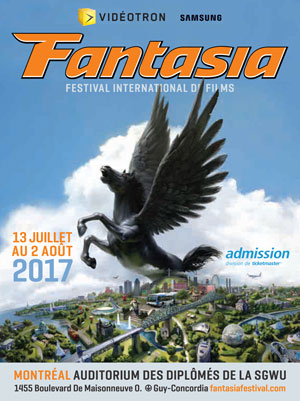 Fantasia Festival started today in the evening, opening with Korean film, The Villainess. It runs for the next three weeks! It runs from July 13 to August 2.

Luckily, I’ll be covering it this year, like past years! This year, I did think ahead and tried to get myself media accreditation and it happened! That is awesome and I’m really excited. I’ve generally gotten my calendar set on what movies to fit in and I’m being a little pickier with times and what movies I see. The first review goes up tomorrow afternoon as I ponder over a documentary and how to word it properly in a review, as you all know that I don’t review documentaries a lot.

With that said, I’ll try to keep variety here, however, excuse me if the festival gets on and I don’t have as much time or energy to think in advance for it. Between balancing actual work, Fantasia Festival and Game Warp, its going to be a intense scheduling and efficiency practice on my part. And no, this festival has jumped back to its roots a little more and dives into a lot of foreign films as well as straying a little more away from horror this year. Its a nice change although I do potentially have some in my schedule. I won’t bore you with the technicalities of having the press pass, because honestly, I’m feeling incredibly grateful to even have it so I’ll be working extra hard.

With that said, every year I talk about hte movies that I’ll be going to see. I feel like I can’t promise anything this year as it can change anytime so instead, I’ll talk about the movies I plan on seeing and the movies that are in my maybes and has me intrigued:

Movies I considered but can’t seem to fit into the schedule (or trying to):

Looking at the listings, there are over 200 films, both shorts and full lengths and an awesome lists of guests that will be hosting their films from directors to writers to cast members and even crew members. Looking at the calendar and blog archives, I’ve been covering Fantasia unofficially for the last 3 years (maybe 4 but first year, I only saw 2 movies), and the Festival has grown so much over these years and the movie choices have been incredible. Its always a positive experience going and if you are in Montreal, I urge you to go check it out!

If you do, give me a shout! Maybe we can hang out and talk movies! It’ll be fun…if time matches up, of course 🙂

Have you heard or seen any of these movies?
The full list of films can be found HERE.
What movies peaked your interest?

6 thoughts on “Fantasia Festival is Here!”