As always, hitting the brink of the deadline, here is my entry for the 2nd Annual Remembering James Horner Blogathon hosted by Film Music Central. Last year, I took a look at Once Upon a Forest for this blogathon and it was a great one to revisit. You can check out the review here. This year, I decided to check out another family fantasy film adapted from a children’s book series that I haven’t read called The Spiderwick Chronicles. I’m a huge fan of Freddie Highmore as a child star, even now in Bates Motel. I think he’s fantastic and for a while, I did take the time to catch up a lot of his movies a few years back and this was one of them. I’m excited to have a reason to revisit it and hope that the magic is still as charming as I remember. 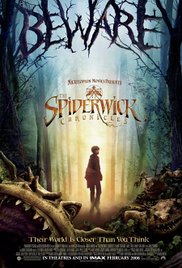 Upon moving into the run-down Spiderwick Estate with their mother, twin brothers Jared and Simon Grace, along with their sister Mallory, find themselves pulled into an alternate world full of faeries and other creatures. – IMDB

The Spiderwick Chronicles is a fun little fantasy adventure children’s movie featuring a double dose of Freddie Highmore as both Jared and Simon Grace who along with their sister, Mallory (played by Sarah Bolger) are taken to a home that their mother inherited from their great aunt while she goes through a separation. Jared takes this the hardest and after a fight realized that there is something in the walls. As he chases it down, he finds a secret room accessible by a dumbwaiter and there he finds a book that warns him to not open it. Being a child, of course, he does. Whether it was an act of rebellion or thoughtlessness or curiosity, this opens up a realm of fairies and other more dangerous creatures that have been seeking this field guide of the magical creatures to use it as a way to control the world. This one dangerous individual is a giant ogre, Mulgarath (voiced by Nick Nolte). Some of the gentler creatures who create quite the comedic relief is Hogsqueal who looks like a hog and is obsessed with birds (voiced by Seth Rogen) and the protector of the book, Thimbletack (voiced by Martin Short). Its fun adventure with some pretty cool CGI effects and an all around entertaining story. While the start might show some over acting in Freddie Highmore, he soon settles quickly as they put away the family and sibling rivalry and jump fairly quickly into the meat of the fantasy world and its just a quick ride to the end.

As this is a blogathon for James Horner, its important to discuss the score. James Horner makes some of the best orchestral scores that help build the atmosphere. Here he carries mystery and suspense when the world is first discovered, then takes us on a musical journey that aids as the adventure picks up where these siblings bond together and truly find their courage as they plot their protection for their home. The score compliments and accentuates the adventure particularly. Adding onto a well-executed film to begin with, this makes it even more engaging to watch. Its hard to ignore the seamless score that James Horner puts together for Spiderwick Chronicles.

Sarah Bolger is a familiar face now. While I have yet to check out Into the Badlands, I’ve seen her as Princes Aurora in Once Upon a Time and especially in Emilie, a psychological thriller released last year that was very well put together. I can’t remember if I had actually written a review but its a great movie that truly showcases her acting skills and the potential she has. Her sister role as Mallory brings a sense of balance, not because she’s a girl but also because she’s very tough as she wield her fencing sword in all her fights. Its an impressive character.

In terms of the double Freddie Highmore, Jared and Simon have relatively different personalities and it gives them a more unique character and lets us see the difference other than how they dress. Freddie Highmore wasn’t great in the Jared role when he starts but it might just have to do with his difficult child act and once it was dropped, it was really fun to watch, even though Jared is more of the central character here.

In terms of voice actors, we have Nick Nolte as the baddie. For a children’s movie, it worked really well. I was pretty invested into the movie and the villain even if he didn’t really show up that much and there was one part where he was human and the transformation was pretty cool. Other than that, Thimbletack (Martin Short) and Hogsqueal (Seth Rogen) are really fun to watch in a silly way. Their creatures themselves are rather creative and in a somewhat adorable way, they are pretty appealing. I have to say that Hogsqueal could have had more screen time although as a non-Seth Rogen fan, I actually thought this was a great performance but it had to do with this silly character that added a lot of entertainment value.

Overall, The Spiderwick Chronicles is a fun and fast-paced fantasy adventure movie. It has great performances all around and a good balance of comedy and adventure, making it incredibly entertaining and engaging to watch. The CGI is done very well and not to mention, a well-executed story that is accentuated by a great score.

Have you seen The Spiderwick Chronicles?