Its been since September and Queen of Katwe (review here) but finally, we got selected for the advanced screening for the next movie. Its funny because I didn’t even know about this movie until we went to the theatres for Ghost in the Shell (review here) a few weeks ago. Unforgettable snuck in without really a lot of previews or trailers and totally under the radar. Since Grey’s Anatomy, I had my eye on Katherine Heigl but it seems that she has vanished the last few years and well, Rosario Dawson is quite the opposite especially with her involvement in the whole Daredevil and such Netflix Original series. With that said, not sure what to expect with this one.

This is the first time we had the advanced screening at a Cineplex VIP lounge and at the theatre near us so it was quite a unique experience. Not only did we get the advanced screening but it also came with some appetizers (buffet-style) and a ticket for beer or a glass of wine. Pretty classy and enjoyable. I actually didn’t expect the whole nine yards so it was pretty awesome.

Now for the main feature, let’s check it out!

A woman sets out to make life hell for her ex-husband’s new wife. – IMDB

If you haven’t been to these free advanced screening before, when you leave the theatre, there’s these people running these events that ask you what you thought about it. I had a lot of thoughts that had solidified during the film already. Its a pretty rare occurance to be so clear about where I stood with the pros and cons. I’ll dive deeper into it later but I could stand there for 10 minutes talking about the film if I had to but I just gave a score of 6 out of 10. Honestly, I could be convinced to bump it to a 7 out of 10 but various reasons did drop it down a point and we’ll talk about it. I’m not one to do a rating system (unless I’m writing for That Moment In), so that is just a guideline of what to expect. 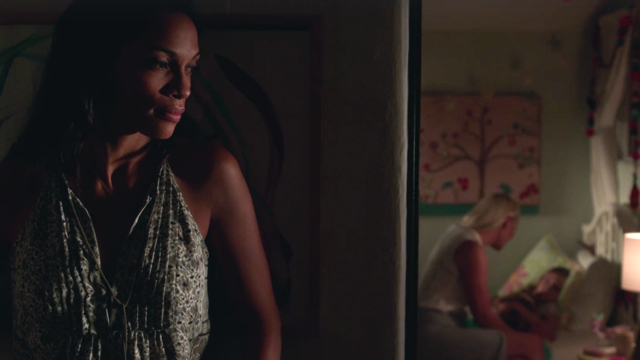 Let’s start with the pros. Unforgettable has a solid cast. The majority of the cast delivered on their performances. Rosario Dawson was fantastic as the new woman with a secret past trying to just live her life in this new reality with the love of her life and learning to be a mom. She is plays Julia and probably has the most depth and character development. Playing across her is Katherine Heigl, as Tessa, the ex-wife who just can’t let go, channeled her crazy and did a pretty good job. They were really the focal points of the film so it was important that they delivered. Her character also did have some depth. On the side, we have the husband David, played by Geoff Stults. While he was here quite a bit, the script didn’t write his role to be too much and that is okay. For what he needed to do, he did his part pretty well. The little girl who was the daughter Lily is played by Isabella Kai Rice and she wasn’t annoying at all, in fact, she did alright. My fave does go out to the most uplifting part as Rosario Dawson’s Julie’s friend, played by Whitney Cummings. It was a supporting role and yet her character brought a nice contrast. Please note the emphasis here is on performances. I will elaborate further on it later on because the nitty gritty con is about the other part of the equation.

The next pro goes to capturing the suspense with camera work. There are a few shots in this film that really do a good job of using a first person perspective with the camera to create suspense. Now, I say this as various shots and a lot of them are in the first act, because things start falling apart really quickly and it doesn’t have much to do with the camera work or the potential for suspense but rather the downfalls of Unforgettable. 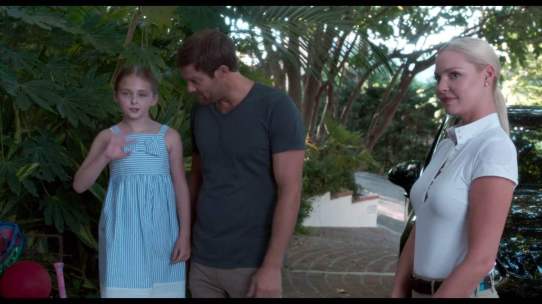 The downfall of Unforgettable is that it is quite forgettable. A movie can have fancy performances and a solid cast that delivers everything but a good script, intriguing dialogue and even more than that, executing it well is a must. What makes it hard to swallow is that there was such great potential especially with this cast and some scenes showed it off so well, like I said, in the first act, then things just fell apart. Act 2 was supposed to hit a climax. It was supposed to give character development and meaning and yet, it was just a contrived and predictable sequence after sequence. There was no subtlety in it. It was like they were scared the audience was too stupid to link one thing to the next to there was an over focus on certain movements. It made the next scenes incredibly easy to figure out taking away all the thrills it had as it reached closer and closer to the end. Not to mention, the dialogue sometimes just couldn’t hit the right note and gave off a rather awkward feeling. Its not a “I’m talking to a crazy person” awkward, but a more forced sort of awkward. As it closed to Act 3 and we stepped near the finale, it started hitting the right notes for a second before falling even farther apart with some nonsensical conversation between these ladies which made the entire movie want to hit something deeper that felt like it was really just trying to find a way to end this with a little twist or something extra and yet, somehow it didn’t work that well.

Thrillers are hard to do. I get that. The effort here was solid. In fact, the director here may have produced a long list of movies in her filmography but this is the debut full-length and in that regards, does a decent job at it. The main issue here is the script and the execution of the story. The thrills just aren’t consistent. The scenes are predictable. While the performances were great and everyone did what they could with what they had, it just wasn’t enough to pull it all together which is a complete shame because the potential was there. However, this isn’t the bottom of the barrel, in fact, its probably a good choice for a rainy day or a lazy Sunday afternoon because the performances here are pretty impressive.