Next up in the Valentine’s Marathon is a classic that I’ve been meaning to see and that’s Singin’ In the Rain! Lots of popular songs and a musical seems like a great formula. Not to mention it looks incredibly fun to watch.

Singin’ In the Rain is a classic and I finally can see why. There isn’t much I can say that hasn’t been said before. I’m pretty sure of that. Its not only a romantic story but an incredibly light-hearted, comedic and fun one. The music is wonderful and the idea of watching Hollywood change from silent movies to sound brings in this new adventure for everyone as they embrace change. Not to mention that the entire cast is totally awesome and charming with a lot of character. 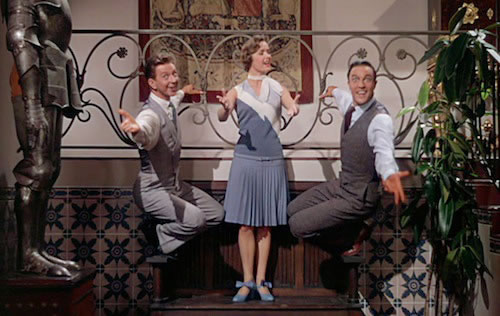 Our main characters here are Debbie Reynolds as Kate who turns a cold shoulder when they first meet at big silent film star, Don Lockwood who then gets intrigued. There’s so much here to love in her character. For one, the moment we see her in that number jumping out of a cake and locks eyes with Don before doing that cute little dance with her crew is fantastic. That whole scene sets off the right tone of the chemistry and the charm both of these characters have. Don Lockwood is played by Gene Kelly and this man’s smugness as Don is awesome. It creates the perfect type of character that challenges each other. Although their romance develops relatively quickly, it is believable. Aside from them, another rather big role (although its more of a supporting role), is Don’s best friend, Cosmo who is a complete goofball in so many ways but also an incredibly talented musician. Together, these three create the lighthearted atmosphere this movie needs especially with sound numbers like “Good Morning”. Before Kate shows up, Don and Cosmo also have some great moments to show how strong their friendship is and how on beat they are together, not to mention a little silly. It brings so many layers to these characters.

In a rather outrageously funny character way was this scene above and it really  highlights Jean Hagen’s character, Lina Lamont who is a great silent star but the moment she opens her mouth, you realize that the transition to movies with sound is really not for her anymore. At least back then when it was full of music and elegance, there was really no place for her as she learns to round her words and be used to speaking into a microphone. However, it did bring a lot of humor as we saw the disasters that it’d bring. Not to mention, the little dramas that she would like to cause for the diva that she was as she grasped to stay alive in the changing movie business. On that note, other characters also helped, like Douglas Fowley as Roscoe and Millard Mitchell as R.F., the latter pretty much runs the studio.

Its funny that Singin’ in the Rain before I saw it seemed like just another musical. Probably much better in calibre because its a classic. For that, it didn’t disappoint me at all. In fact, what made it even rise higher in my books and actually is incredibly perfect in many ways is that it has something for everyone (or mostly because I’m sure some people don’t share the same type of love I had). Why I say this is because my husband who is not into musicals or romantic comedies sat there and enjoyed the humor it had and the colorful characters. For that, it makes it even better because the songs compliment a fantastic movie that brings just the right tone of humor and balances it with a story that has notes of romance but also something more to give it even more substance.

I love Singin’ in the Rain. Its a great movie and definitely well worth its classic title and in my heart, I truly believe it has something for everyone to love. The cast is fantastic, the story is awesome and the music is simply great. There are some catchy tunes and probably a lot that you have already heard. Debbie Reynolds is so adorable to watch and Gene Kelly is charming in a full of himself kind of way but really pulls it off and we can’t forget Donald O’Connor who is a comedic highlight that keeps the movie fun and entertaining. Its a little bit of everything fitted so perfectly well together.

Have you seen Singin’ In the Rain?

***Since this was supposed to be yesterday’s post, I’ll have another Valentine’s marathon review going up later today.***