Continuing on with the Gilmore Girls, Season 2 ended on quite an odd note. Marriage, broken hearts and conflicted feelings pretty much wraps it up. Heading into Season 3, Gilmore Girls has a lot in store as it would seem as it picks up months later when summer is at its end.

Lets talk about the third season! 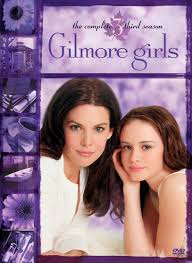 Season 3 starts with learning that Rory headed out with Paris for a learning experience. Her and Paris has grown closer a friends despite their personalities. They come back to head into the final year of high school at Chilton. Rory comes back to Stars Hollow with Dean eagerly waiting for her to come back but in her mind, she thinks about kissing Jess at Sookie’s wedding but realizes that he has moved on with someone else. Lorelai is healing from Chris showing his love and devotion to her but having to run off to be responsible and stay with Sherry and take care of her as she is pregnant. Over the course of the season, Jess experiences quite a bit whether with Rory or personally. Luke and Jess’s relationship grows. Emily and Richard Gilmore become more prominent in their lives as we can see their roles becoming more important as well. Finally, Lane commits to joining a band after learning to play the drums. As usual, the town of Stars Hollows has a lot of shenanigans thanks to Taylor and Kirk always has something funky to add. 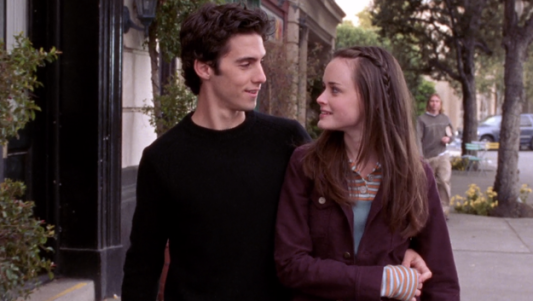 Perhaps generic and easy to figure out but I love Jess as a character. Jess’s character has one of the most developments, particularly in this season. He’s troubled by his mommy issues which he tries to hide. He actually is really smart and loves reading inside his bad boy exterior. He challenges Rory but also likes her a whole lot that he’ll go through lots of situations for her. However, Jess is still young and he is not yet the guy for Rory yet. Will he be? Well, we’ll see, right? Still, his relationship with Rory is one that I love.

Jess’s relationship with Rory might not be very lengthy, at least not in comparison to Dean’s but it was a lot more impactful. Something about Jess and Rory really meshed well, but it also felt like they weren’t in the right place yet. Somehow it seems very similar to what we can say about Lorelai and Chris, who seems to mesh well but never in the right place to be together yet, no matter how much they loved each other. 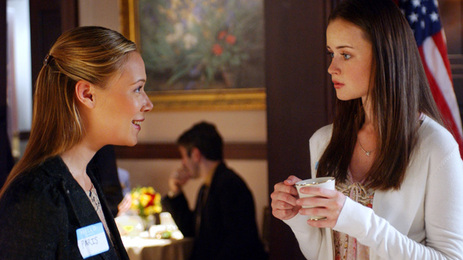 The friendship between Rory and Paris is a special one. Its competition and intellectual and awkward in so many ways and yet, somehow they’ve bonded in the oddest way. Paris is all work, high intensity all the time. Rory is also pretty intense about academics but together its hard to deny and they make a good team. Paris is efficient and all work where Rory is more of the appealing person and pulls everyone together but when times get hard, she stays loyal and steps up. That is the growth that Rory has in Season 3 and one that is pretty awesome. 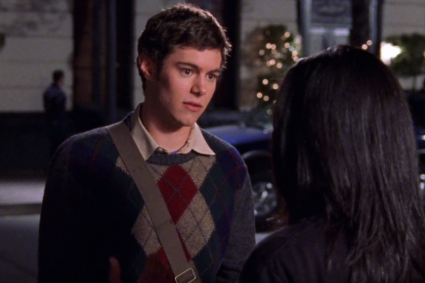 Season 3 brought in some familiar faces as cameos. There was Adam Brody who played as Dave who has a relationship with Lane. There’s Billy Burke as Alex, a businessman who ends up dating Lorelai for a little bit. These two in particular have quite some fun moments from Lorelai trying to pretend to learn how to fish to Dave and Lane trying to hide their relationship not only from Mrs. Kim but also from their band. And while not exactly a cameo, Dean’s new relationship is with Lindsay, played by Arielle Kebbel. Not to mention Rob Lowe also makes an appearance as Jess’s father. I’m sure I’m missing someone else but please forgive me, as I type this up, I’m already at Season 7…

Embracing a new stage is probably where season 3 is. Sookie and Jackson are pregnant with their first child. Paris is facing her relationship and her and Rory are preparing to apply for universities and choosing their next step to the future. Lorelai and Sookie and Michel are faced with Independence Inn’s accident and embracing their dream of opening their own inn. Opportunities come with hurdles and they face them head-on like they all should. Everyone is learning to be brave and doing what needs to be done to achieve their goals and find a place that is right for them. 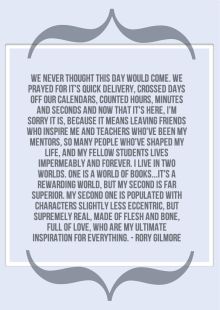 I don’t really have a whole lot to say about Season 3, mostly because while I find it a charming season, my favorite parts that I remember are the hectic moments and watching Jess and Rory and well, Jess in general. Luke and Lorelai are converging in paths but yet still finding their own partners and futures. Emily and Richard are becoming really fun to watch with their bickering and Friday night dinners and the friction of losing what they’ve built over the last two years. Everyone is picking up their courage to achieve their own goals and while there is still some conflicts, its a fun journey. There were some moments that really hit me and it shows a great world building and immersive characters. My favorite quote is by far the one on top when Rory does her graduation speech. Let me tell you, I got misty. That highlights the mother-daughter relationship that Lorelai and Rory have. Its pretty awesome!