Netflix Originals are definitely taking TV in a huge whirlwind. One of that came out not too long ago is Brazilian Netflix TV series, 3%, a dystopian future of sorts. Its description reminded me a little of The Hunger Games mixed with something else. Fact is, I’m starting to fall out of this dystopian world phase except it seems they aren’t done yet. However, this one did catch my eye, plus, I’ve never watched any Brazil productions before so I was intrigued. 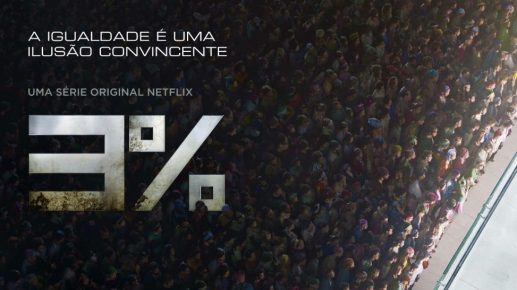 A thriller set in a world sharply divided between progress and devastation, where people are given the chance to make it to the “better side” but only 3% of the candidates succeed. – IMDB

Dystopian futures are done to death. Look at the books and movies and tv series, it just doesn’t end. Is that a bad thing? Most of the time especially when plots feel like its rinse and repeat. It is hard to not have exhausted all the dystopian ideas since the very popular The Hunger Games has taken over, then bringing even more popularity to the fact that Battle Royale was the unmentioned inspiration and basis which was done much better except its a foreign film. Talking about foreign, 3% is a foreign TV series and while I confess that it has some components that reminds us of The Hunger Games, it strays rather far away from that. Maybe not the dark tone but rather in the way that it treats it more for an older audience. In short, 3% is a unique series. I binged it in pretty much one sitting. There are eight episodes of about 50 minutes each, which doesn’t take too long and for the most part, it does a decent job at keeping it intriguing. My only little criticism would be that it was pretty awesome up until about episode five and partially six and it made me realize why I didn’t like those episodes as much.

3% has a good idea and a pretty decent execution. While the poor and rich being separated seems like a very generic idea, the way they choose to  design where the Inland poor people live is a lovely production setting and it shows the contrast with the midpoint of being at the testing facility sort of building where the selected group have to undergo a bunch of tests which will seek out the best of the crowd, the 3%, as the series is called. While it seems that the tests start off rather innocent with a cube building challenge, and the only dangers seem to be the ruthless characters that will do anything to win, the challenges do get worse and focus heavily on the inner monster buried within them. How they choose to get out of it or resolve the situation will determine who makes it to the next stage. If the group is doing too well, then the people controlling them will figure out a twist. While it does sound very Hunger Games and The Maze Runner, the intensity of the situation lies in a psychological level as our main group of candidates are unveiled to us by their back stories each in a different episode (which is very much like Orange is the New Black strategy). The technology here seems advanced and the characters are unique to watch. As friendships and allies and enemies are built, we start see the character develop as they try to strive for this better future. Even if the future is an unknown as to what they are to face or where this offshore is or what lies ahead, they all believe that anything is better than where they are.

The best part of 3% has to go to its young cast who play as the candidates. These handful of casts had depth and they were able to portray it very skillfully, making us really capture the character that they were going through. Perhaps, we can’t quite go into the characters without talking about the plot a little more. While most dystopian movies like these ones are focused on solely the candidates the majority of the time, 3% as a TV series takes the time to really let us know the subplots that are bubbling in the background. The candidates still hold a large place for the first four episodes and that is one of the reasons for the build-up being very engaging. Their tasks are not easy and many times are rather difficult choices. It shows us who we want to side with and that what you see might not exactly be who they really are. Each of them have their skills to be a part of this no matter where they come from or their background or even if they have a disability. They all have some weakness but a lot of strength in various departments to make up for it. With that said, the subplots go to the background controllers. We never learn a lot about the people in the background who control these tests but the main showrunner (I forgot the title he has) is called Ezequiel and this is his dream job who now is under investigation from the main council as they send a woman to watch over his every move called Aline. As he tries to keep himself together and hold his role, he also needs to prove that he is capable of this job especially now that not only he under investigation but the first crime on the Offshore has also happened and they need to find out who is the undercover candidate rumored to be in their tests that are part of The Cause, which is a secret group against the entire concept of 3% and the Offshore and is set out to ruin it.

Ezequiel and Aline are actually rather well-built characters as well. However, the fault in this series comes in using an entire episode to talk about Ezequiel’s past when we’ve only seen snippets of him and in a rather bad light of who he is that the episode dedicated to him made it rather unengaging. I realized how much the series had made a fantastic effort and successfully helped connect us with each of the candidates but somehow, didn’t spend as much time making us care for Ezequiel even in all his little moments of strategizing and keeping balance between the ruthless tests, his questionable solutions and decisions and his verbal wars with Aline. However, the series does pick up again as the situation escalates to uncontrollable levels and the subplots start becoming a little more relevant and also makes the character, mostly the hated realistic ones into proving that they actually do have a heart, while others have changed because of the need to survive. Everyone here has a different agenda and perhaps that makes this one not only about survival but these desires and whatever haunts them or the secrets they hide will be what makes or breaks them by the end.

Overall, 3% is a pretty great series. I wasn’t expecting much when I started it but despite two slower paced episodes, the sum of it was thrilling and engaging to watch. The characters are done well and developed properly. While the story itself seems generic, they way they execute it along with the production sets and everything together makes for an impressive experience. I’m pretty happy that it is going to have a second season and look forward to checking it out!