Last night, I faced the reality that there is no way I’m going to wrap up this round of Netflix A-Z  without bombarding everyone with posts during the holiday season and that wouldn’t make a difference because all of you will be busy with whatever. However, seeing as it is a personal goal, I’m still going to try my hardest to do as much as I can while getting the blog updated. Funny enough, the struggle is watching the movies and not exactly the writing part.

Next up is R selection! I’ve been eyeing this movie for a while especially since it came out after Gone Girl, I believe. Return to Sender didn’t get a whole lot of praise but I’m willing to give it a go either way. For the record, my Q selection was a movie I had started with Shiloh Fernandez and didn’t end up finishing because I just wasn’t in the mood for it. I didn’t know he is this one but you know what, he was decent in Evil Dead so I’m going to be objective and watch this. 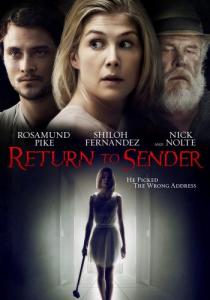 A nurse living in small town goes on a blind date with a man who is not the person he says he is.-IMDB

Can I just say that this movie poster is about the worst because it takes away what the movie wanted to show as a twist finale. Not to mention the tagline there reveals it all also. Based on this, I wonder if we were supposed to know all along that Rosamund Pike’s character, Miranda is not to be messed with. If thats the case, then it wasn’t really apparent. While Return to Sender was trying to show an odd attraction of Miranda to her rapist, William while he is in jail, and it was in some moments apparent of what she might have been plotting, it just seemed like a lacking script or direction to achieve it rather than it being the message. With that said, I can’t say that I enjoyed Return to Sender a lot unfortunately. I believe mostly, the flow of the plot had me not so intrigued because it was not subtle enough as a thriller.

While the story was hard to really get immersed in, it is hard to fault Rosamund Pike’s performance as Miranda. Miranda is a nurse with a lot of aspirations and heart. Right off the bat, we know that she is really proper in an OCD sort of way. That isn’t a problem although she is a little extreme. Right from the start, it is devastating that Miranda is raped by a stranger that she assumes was a blind date. Cue in the hazards of blind dates perhaps and letting strangers into your home. One of the best performances does go to Rosamund Pike because she emotes really well and probably it is because of that, she shows off who her character can be before the twist even happens.

On that note, Shiloh Fernandez is pretty good as well in the role of the rapist, William, who gets caught and ends up conversing a good bit of the movie with Miranda. He is incredibly fond of her but also has a twisted personality. With Miranda, he genuinely seems to like her a lot but he lets his impulses take hold of his actions and that is how the rape happened according to his version but as the movie goes along, you can somewhat see that while his personality not with Miranda is rather intense and immensely different, there is a attraction going on between them at least on his part where he is starting to feel like his is being forgiven for his actions and that seems to mean a lot to him. Obviously, from the poster, you already know that Miranda probably doesn’t have the same feeling because she lost a lot with the trauma that happened to her.

There aren’t a lot of characters in this movie and the last one is Nick Nolte who plays as Miranda’s protective father. He seems oblivious to the true nature of her daughter and is confused with her choices like befriending William who hurt her physically and mentally. Nick Nolte’s character doesn’t play a huge part and somehow I fail to see the purpose of his part other than one event that somehow casts suspicion to Miranda’s darker side. Perhaps, I’m just not catching on to the character study that is going on here for this thriller.

Overall, Return to Sender is slightly lackluster. While the performances are great, the plot itself seems to lack subtlety and just like its poster, reveals the twist before it was meant to be. There is a lot of potential for this to be much more than what was delivered and honestly, I think it might just be that the plot execution got a little lost.