We are back to continue the Halloween Marathon’s second featured franchise. It is time to give Evil Dead 2 a go. After the less than enthusiastic feeling I had about the first one, I can’t say I am too excited but I need to be objective and let’s just say, it cannot be any worse in the character development for Ash, right? Plus, my incredible Game Warp Podcast cohost (also MBDS podcast host) assures me that the second one is better. I trust him and his movie preferences so let us move on and get this started!

The lone survivor of an onslaught of flesh-possessing spirits holes up in a cabin with a group of strangers while the demons continue their attack.-IMDB

Evil Dead 2 is no doubt better than the first one. One of the main pros of this movie is that it embraces its campiness and takes us for a more comedic ride which yields more laughs while still having some good creepy horror. It does start a little slow and the beginning seems to want to connect the previous movie by somewhat rehashing it a tad and getting us caught up if we didn’t see it before. That is a good move. Bruce Campbell’s character also takes a while to build. For a a little bit of the movie in the beginning, he still drove me a little crazy with his indecisiveness and sentimentality however, the development of his character is embraced much better to resemble a rather memorable character with some extra fun moments. Evil Dead 2 is very similar to the first movie however, it improves on the bits I didn’t quite like about the first one so that is a plus.

Evil Dead 2 is definitely going in the right direction. I had some doubt as the movie started and I was trying to figure out whether it was really a continuation or whatnot. By the time, we knew that Evil Dead 2 was heading into an odd and quirky route especially as we watched Ash go a little nuts with the evil spirits. As we watch him slowly spiral downwards, we also see a development in his character whether it is his more frequent one-liners and his silly and over-exaggerated expressions and then transforming into a bad ass. This is where we know that it is going to start being a fun ride. Plus, the characters in this one get a little more screen time so they have a little more time to have some meaning to them although none of them really mean anything to particularly Ash when two are here in relation to the man who essentially released the evil spirits or at least initiated it and two others was just there for the ride and earning some extra money but ended up getting stuck. However, even the cast in this one carries a much better tone in the way they are than the original. 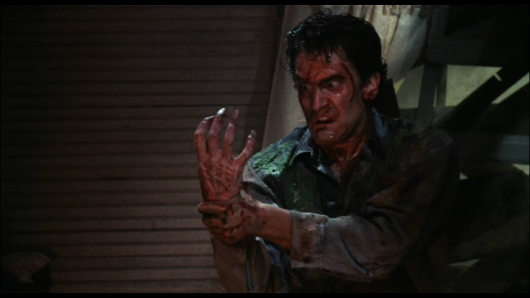 Evil Dead 2 has one thing that a lot of movies has and you know, a similar flaw was apparent in the first movie and that is lack of logic in some parts. It is much better in terms of having characters that are smarter but in contrast there are also ones that are incredibly stupid as well. Just saying that if one of the characters freak out about needing to find someone in the woods, in the place of Ash, I would have recounted everything that happened to his friends and then his hand and so on so forth. One of these facts has got to be convincing enough. But, I stand behind Ash in this one because he also demonstrates a lot of common sense and logic near the end especially when trying to end this once and for all. 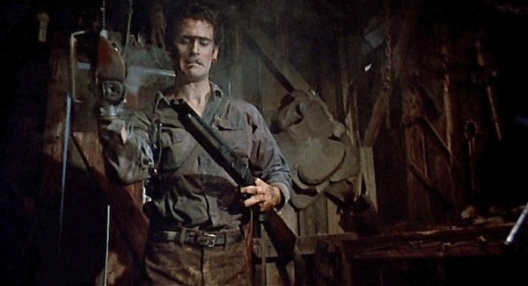 Overall, Evil Dead 2 improves on the original a lot. There is a very good balance of odd, creepy and funny. In many ways, it embraces its campiness much better. I have my questions on certain parts. Most importantly, I’m starting to see Ash in a much better light. Perhaps he is not the iconic character yet but his character has developed a lot in this one and has turned into one that I can get behind.

With that said, I do look forward to seeing how things unfold in Army of Darkness and I am hoping  (after many people have told me) that it will be an absolute blast.

Have you seen Evil Dead 2?
Come back next week for the review of Army of Darkness! 🙂