I know we’re a little behind on this. I got this box for the last week of July and it was well suitable because it was right before the crazy Fantasia schedule went crazy and I wasn’t home much. I thought it would be a good idea to get one of these boxes and at least make sure that things would be under control the week before. And it definitely was. Surprisingly, unlike last time, I made half of these recipes and it all turned out relatively well…except for one (which was not exactly under my supervision). But we have learned from our mistakes. You will see.

This is kind of an unboxing but its also a recap of the recipes and how they turned out. Maybe along with some impressions. This is a long term thing we’re planning to keep as a once a month little something for ourselves. It keeps things fresh and gives us new ideas. We’re really enjoying the experience as a whole. 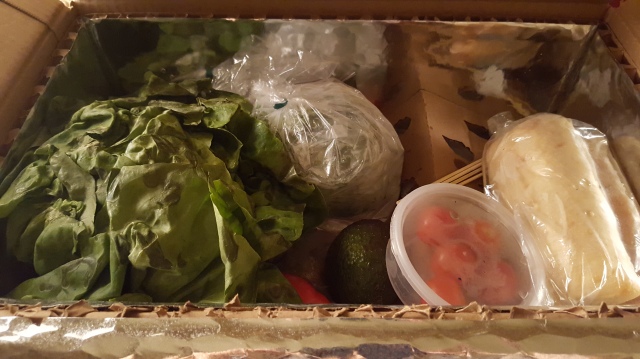 This week’s menu had:

Fish (Turbot) with Pancetta and Sage 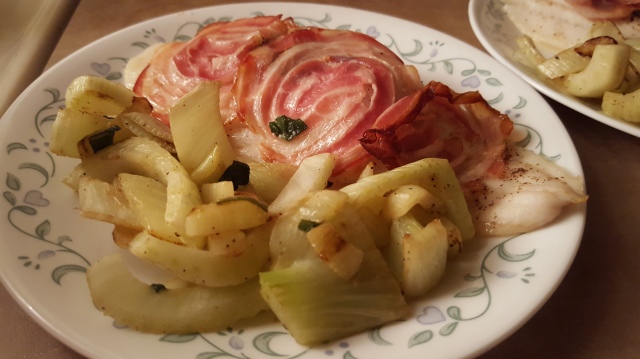 The fish is Turbot which I’ve never cooked before. It was served with fennel and white rice (not in the picture).  The fennel made my house smell like licorice for the next 24 hours but that is nothing to complain about. The best part about this meal and recipe other than it tasting really good was that it was perfectly made so that it was easy dividing into two portions. One filet each and the fennel was already chopped so just half on each plate. 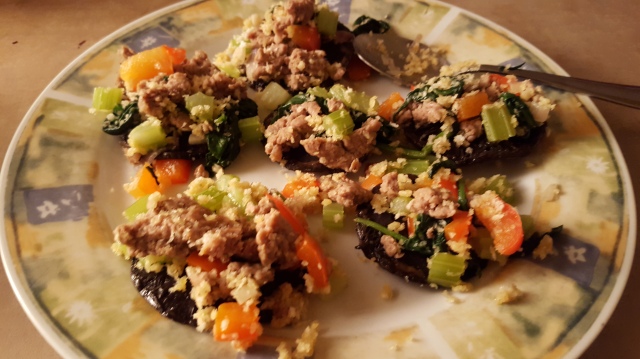 A heaping mess is what I’d call this BUT appearances aside, it tasted great. This recipe is served with radicchio salad and well, we ended up cooking that separately with balsamic vinegar and it turned out decent as well. So this is where I started thinking that we should have videos to teach us how to make these recipes because somewhere along the way, I did something wrong. My guess is the mushrooms. Fact is, some recipes do have video instructions but this one didn’t. However, it probably is my inexperience with stuffing anything that caused the issues.

Add on more zucchini! Starting at the end of July till now, we’ve been harvesting zucchini like crazy so this was just another meal to add onto the immense amounts of zucchini I’ve been eating. But I love this veggie the most so its all good! This was another great recipe. We had to modify it a little, I believe, because I don’t do well with spicy foods. However, the spices used and just the balance of this dish was really great. I loved it. This meal is served with grilled zucchini and green salad.

And finally…our fail. We never make veggie burgers before so this is a completely new concept. We did learn that we needed to remove the water better before adding in the egg that held together the patty. However, we did end up eating this with veggies and whatnot and it tasted pretty good.

A few thoughts after this box

I’m not sponsored or anything so I guess as a consumer, I get to have some thoughts about this. This box and the one before gave me some little things that came to my mind as I was cooking.

I’d add in instructional videos for all the recipes but I think most of the recipes are rather straight-forward. It doesn’t mean that I am disappointed with any of the meals. I just think these are ways to improve on a pretty great service to improve efficiency for its users. Another thing would be to have allergen-free options. I believe I mentioned this in the previous unboxing so I won’t go further into that. As someone with allergens, I just find that a constant frustration.

Overall, some really decent meals in this Miss Fresh box. We’ll be getting another one soon and it will be much more timely with the overview of it.