Fantasia Festival is here! I know that I probably should be posting up reviews right away but I kind of want to take a new approach to give myself a few days to let the movie sink in a little and give it some thought. The first movie to kick off the festival for me is Rupture! What caught my eye for this one wasn’t even the plot but rather the director Steven Shainberg and lead actress Noomi Rapace. Not to mention it was hosted by the director Steven Shainberg and with the bonus of cinematographer Karim Hussain and one of the producers as well. 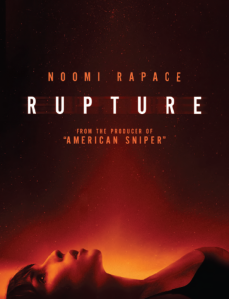 A single mom tries to break free from a mysterious organization that has abducted her.-IMDB

Rupture is a strange film. It is exceptionally unique but so very bizarre. From the choice of color and tone for the cinematography to the characters and their development to the story itself, it highlights a very indie all genre movie. Rupture is a fantasy and sci-fi thriller with hints of horror splashed around but also manages to remember to give its audience moments to relax in its somewhat oddly fun moments even when the situation that our main character Renee is nothing but tense and mysterious. The best part is all the attention to detail it has put in. Everything in there has a reason to be there from the lighting to the colors to the characters and the slow reveal of what is this mysterious organization. It had effective unsettling scenes as well that gave it the emphasis of a horror even if this is very much more of a thriller.

Noomi Rapace is the main actress here and we follow a lot of her character Renee around the story. We see her from the start as a single mom and one that is independent. She is brave and smart.  Her mind moves fast in solutions on how to escape. She does what she has to to survive. These are all her traits revealed to us. Who can be so calm in situations like this hers where she is abducted and sent far far away to a closed reinforced room with strange people that she has never met asking her questions on her fears and medical history. What do they want from her? That is the question that lingers in the air throughout most of the film. It is amazing how the imagery and set up of the entire movie has such a good pacing to make us remain interested. It takes the time to set up the atmosphere of dread as she tries to escape and Renee is the hero we cheer for, even if the little criticism is that when things went crazy or she was screaming, I had a hard time understanding her dialogue, but what is great is that most of the movie can be understood by observing the surroundings

Noomi Rapace may be the character we cheer for and a fantastic character at that, especially getting a lot of support from the local audience because her character in Rupture is from Montreal. However, we cannot overlook the other characters, especially those in the mysterious organization. There is no need to say how great Peter Stormare is in the offsetting way but some of these other characters are also familiar faces who capture the awkward roles that they are required to deliver. Kerry Bishe was in Argo before this and while there hasn’t been much from her, she definitely carries a balance to the characters. Ari Millen also reaped a lot of reaction from the audience and has the most bizarre dialogue and that is probably because he is in Orphan Black (which I have not seen yet). Another familiar face was Lesley Manville which I couldn’t pinpoint but was in Maleficent as one of the fairies. During the Q&A session, they were asked about the casting and in the end, it was focused on whether an actor could portray the vibe they didn’t to sink into this hard to grasp character that was able to deliver the mystery cleverly. This group of characters were fantastic.

Overall, Rupture is a clever thriller that keeps its audience wondering about what the big mystery is and waiting for the reveal. It is very detail-oriented and little subtleties will all make sense at the end. The characters are constructed really well and casted well to be able to deliver the role whether it was members of the mysterious organization with their awkward personalities to the main character Renee played by Noomi Rapace who delivered a captivating performance in a strong female role who never is the damsel in distress despite the situation she is thrown in. There is a lot to love about Rupture especially the care put into every little detail. I highly recommend it.