Our last guest to join us for the Ultimate 80s Blogathon is none other that the lovely Misty from Cinema Schminema.  Misty is possibly one of my earliest blogging friends after I started jumping into the movie reviews world.  She posts creative and fun reviews on a lot of low budget movies and a lot of B-horror.  I’d be lying if she didn’t introduce me to what Asylum is and found the joy and tolerance in watching some of those features. Remember to head on over and check her site out. 🙂

Let’s pass it over to her with her choice, Return to Oz!

The year was 1987 and I was but a wee slip of a thing who had a thing for dark fantasy films (at least those in the kids’ section of the video store – do you guys remember video stores??). I was also obsessed with Oz. It obviously started with The Wizard of Oz but I went on to read several more of the books (Dorothy and the Wizard in Oz – book 4 – being my 2nd favorite). Imagine my delight when I discovered the movie called RETURN TO OZ (and imagine my mother’s dismay when I made her rent that and LABYRINTH, every single week – why she didn’t just buy the damn things, I’ll never know).

In case you’re not familiar, RETURN TO OZ is based off books 2 and 3 of the Oz series (The Marvelous Land of Oz and Ozma of Oz), though be it a bit loosely with Dorothy being the sole protagonist and Tip being erased entirely. It picks up approximately 6 months after the events of the first book. Auntie Em and Uncle Henry are rebuilding their house after the destruction of the tornado and Dorothy (played by Fairuza Balk, so yeah, just freaking imagine the girl from THE CRAFT as Dorothy Gale, y’all. Just picture that in your head, I’ll wait) is feeling a bit lost and melancholy. And who wouldn’t be? Sure, Oz was a little f*cked but it was a hell of a lot more exciting than Kansas. Unfortunately, Auntie Em and Uncle H are a bit worried about her, so much so that they decide to cart her off to the scariest freaking “doctor’s office” on earth for some really nice old-fashioned electroshock therapy (which was, at this point in time, not at all old-fashioned, but very newly IN fashion). Auntie Em has the f*cking nerve to LEAVE her there all alone on a dark and stormy night, with some creeper of a nurse lurking around (a really tall and terrifying woman who is CLEARLY up to no good). Dorothy is TWO seconds away from getting her first “treatment” (literally, she’s on the table) when the lights go out. She’s left alone (strapped down on a table on a dark and stormy night in the dark in a scary building with creepy adults who want to shock her brain, just sayin’) and a mysterious little girl appears and tells Dorothy that they must run for it! Thank god for that girl. Except creeper nurse sees them and chases them down to the river where Dorothy falls in and gets separated from the mystery girl. And when she wakes up? You guessed it – she’s back in Oz! 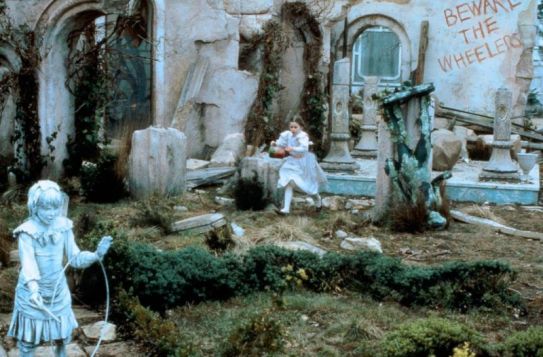 But this time, things are WAYYYYYY more f*cked up than before. Oh, and her chicken from her farm is with her – Billina (not sure what kind of name that is really) – and the chicken can talk (in Oz, not in Kansas) and the chicken is kinda sassy. So. In THE WIZARD OF OZ, there was a scary Wicked Witch, right? Two, technically if you count the one the house fell on. And those flying monkeys were pretty scary. Wanna know what’s scary in RETURN TO OZ?

Right…okay…maybe he’s a little scary too…

You also get to see the Lion, Scarecrow and Tin Man looking not only incredibly different from the original (and kinda lame looking) but completely turned to stone (then ornaments); some light S&M; a guy made out of limbs and a giant pumpkin (also kind of creepy) and a sofa attached to a moosehead that flies and talks. Seriously, this is one of the best f*cking movies EVER.

This (and LABYRINTH) fueled my imagination and love of fantasy like nothing else. And possibly my love for the macabre because this is a REALLY dark movie. Like, no child ever should have watched this thing (and my parents wonder why I started reading Poe the next year, writing crazy stories involving pumpkins and strange lands a few years later, and grew up to love the strangest, most off-kilter movies I could find). This movie wasn’t what you’d call “well-loved” when it came out but it quickly became a cult classic (and with good reason).

If you somehow HAVEN’T seen this (then we’re no longer friends), I highly suggest you go rent this from your local Hollywood Video, like, ASAP. Dark, acid trippy af, like Dorothy really WILL need therapy after this adventure (not the electroshock kind though, tyvm) TOTES, it’s a must see classic of a decade where Hollywood could get away with putting pretty much anything in kids’ movies. Seriously though.