The original plan was to wrap up Persuasion by the end of 2015 but then I caught a cold the week before Christmas and then the holidays came and went and we had parties and gatherings and really more time spent cleaning and recuperating, relaxing, recharging than actually reading.  Lots of Rs going on there.  Point is: 2016 came around and I kicked into my turbo mode and finished up this novel in the beginning of the year. I’ve been having a slightly rough bit of Jane Austen especially with Mansfield Park.  So, its hard to really know what to expect in Persuasion. 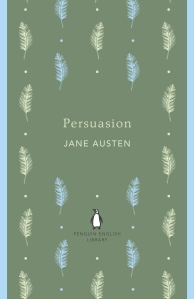 Written at the end of the Napoleonic Wars, Persuasion is a tale of love, heartache and the determination of one woman as she strives to reignite a lost love. Anne Elliot is persuaded by her friends and family to reject a marriage proposal from Captain Wentworth because he lacks in fortune and rank. More than seven years later, when he returns home from the Navy, Anne realises she still has strong feelings for him, but Wentworth only appears to have eyes for a friend of Anne’s. – Goodreads

Jane Austen novels are never long but nothing quite beats the feeling of picking up Persuasion and seeing how thin it was.  I’ve never known much about the book prior to reading it but one of my girl friends claim that its her favorite.  Coming from her high recommendations, I really couldn’t wait to open it. Right from the start, you know that Austen has really matured her main character, Anne Elliott. Reading an Austen book is like stepping into a refined world of social etiquette and class, I always love that world.  I think the best way to describe it was what a character in Austenland puts it, “an idea of a simple world where love is straight-forward and lasting”. I think nothing quite matches up to that quote than Persuasion where we are watching to see if Anne Elliott and Captain Wentworth can get back together after a fallout when they were younger.  On one hand, Anne is hoping that Captain Wentworth has forgiven her while he wants to forget but knows that he will only ever love her. Its reading books like this that really ignite the romantic in me that I’ve actually been missing a lot.

Aside from the longing romance for Anne and Captain Wentworth, I think what makes Persuasion very intriguing is that within the story, there are quite a few characters. We get to learn about each of them and they each have a personality to go with it.  Some of them are made out to be really unpleasant while others are truly harmless. They create a balance that helps set the story in motion at a decent pace. Its never overwhelming or confusing.  Whether its Anne’s multiple sisters or her father or family or friends, we get a good idea of where they stand in terms of social class and their views towards the idea of marriage or relationship.  The building or should I say, rebuilding, of the relationship between Anne and Captain Wentworth are the highlight here.  They start with awkwardness and despair of not being sure how to interact to finally taking the first steps and being a little rusty to feeling like they really just want to be friends and nothing more and then finally not bearing the fact of their love for each other at the end.  While that may sound like a spoiler, it really isn’t.  Austen’s writing is well-paced and elegant enough to make sure that even if we already know the outcome, the characters and story still come to life.

Overall, Persuasion is one Austen book that I’m definitely going to re-read and be almost sure that I will feel enthralled with the experience of falling into the world of Anne and Captain Wentworth rekindling their romance.  Its one that really feels romantic and shows a forever love and that can’t be pushed away.  Its about growing up and realizing what matters most and not being influenced by those around you.  I really liked it a lot.  For me, its right up there with Pride and Prejudice.

One more Jane Austen novel after this one: Northanger Abbey.

What is your favorite Jane Austen novel?