Next up, we’re going to La Maison du Magret. This place is all about dishes featuring duck.  Duck is a huge delicacy here especially for the Brome Lake region. The menu for this one really intrigued me and I’m pretty excited to go. Again located in Old Montreal, this time right across from the Congress Centre of Montreal (or the Place d’Armes metro).  Also, its a restaurant by itself and not connected to a hotel.

And the (mostly) trusty DSLR is back in play so expect some better quality pictures 😉 No more of the blurry nonsense for the most part.

Wines along the wall decor

First service was a well rounded beginning.  We all started with the amuse bouche which we ate with some hot baguette.  That was super delicious.  The texture of the duck and the gentle flavors worked so well together.

After that came our appetizers.  My friend and I chose to have the traditional duck soup and this was made up of duck broth, onions, duck meat, tomatoes and shaved foie gras.  It was a very enjoyable soup.  The balance was fantastic.  I liked it quite a bit. On the side we had a piece of toasted baguette seasoned with rosemary and butter (not sure if it was garlic or not). That was really tasty as well.  Something I actually want to try at home eventually.

My friend’s husband chose the Duck Gizzard Salad.  He said that it was very good as it was fresh.  The duck gizzard was done well.

My meal was the Duck Magret.  It was done well.  Duck always seems to be made a little salty so while I thought it was salty, it didn’t bother me so much. It didn’t help that the foie gras sauce has cream in it so it was exempted from my dish.  I think that might have balanced it off a a little.  The fries absolutely delicious. As you can see, all the dishes are adorned with rosemary. We came to a conclusion that maybe the key to making good duck dishes is rosemary. Something to think about if I ever do make it at home 😉

Next up, I also got to try my friend’s Duck Confit.  It actually was not as intense in the flavors as my magret.  While I’m not a fan of duck confit, it had a really nice taste and texture to it.  My friend found it not tasty enough but I think it all comes down to your tolerance and desire of salt and seasoning.  However, she really enjoyed the roasted vegetables.  They were perfectly cooked.

Last one was an additional choice offered at the restaurant menu with the duck burger served with fries. Not a lot of feedback. I didn’t try it so I can’t say.  My friend tried this dish her husband chose and said it wasn’t exactly for her. I do wonder what a duck burger would taste like.

An additional note, we saw when we left the restaurant that the French fries were à volonté, meaning all you can eat. We barely could finish our plate.  We all left a portion of the fries there.  I can’t imagine even being able to eat more fries.  Maybe thats just me and my fatigue that evening talking… 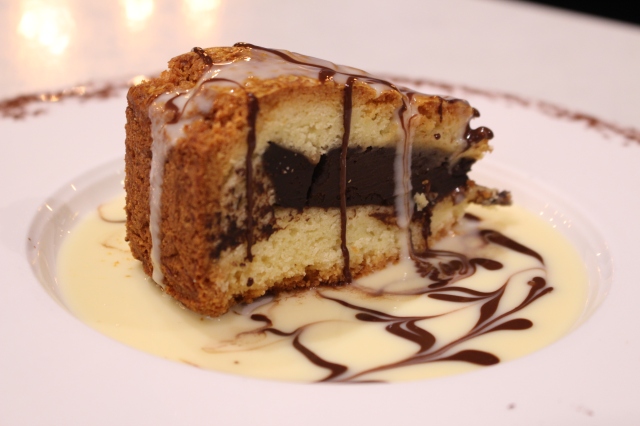 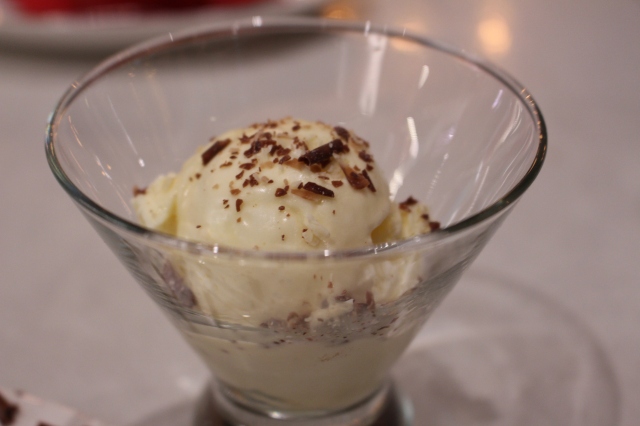 Last service was the dessert. First up is the Chocolate Basque Cake. I don’t know if my friend’s tolerance for sweets are less or it was actually sweet since I refrain from chocolate unless its lactose free products or whatnot. She said it was incredibly sweet and ate half of it and had to ask her husband to finish it.

I had the homemade “tatin”style apple pie.  Two comments: yummy apples, too heavily buttered crust.  Look, I like butter and for my lactose intolerance, butter works fine for me but it was so much that I could taste it and it gave this really weird heavily butter pastry taste.  I’ve experienced that feeling a few times and I’m not quite the fan of it. So by about half my pie, I just ate up the apples and ended it there. The second part of it was ice cream and it was set to the side because obviously, I can’t eat it.  My friend did eat it for me and she said it was really good. I do wonder what the flavor was.  I forgot to ask her.

Her husband had the Grand Marnier homemade creme brulee. I believe they were both fans of it.  The crack on the top was great, the Grand Marnier was apparent (because they both commented about it) and it seemed like it had a nice texture to it.

La Maison du Magret has a good location and a comfy environment.  This place is also something of a rugby joint.  It had rugby on TV and jerseys on the wall.  My friend’s husband remarked on that. I don’t know anything about rugby.  The decor was nice and along the wall, the seats were cushioned and really nicely laid out.  The food itself was pretty much a successful.  Sure, we had a few issues here and there but it was more a personal preference than the food at self being at fault.  The presentation was nice and the flavors were well balanced and all there. The higher notes of this meal resounded to me. Plus, I’d go back to check out their cocktail with hibiscus.  I was low on energy already and had to public transport back so I chose to stick with water but its definitely something that intrigues me.

One more restaurant to go for MTL a Table! Remember to check back! 🙂