Fellow blogger Jack Flacco who runs a wonderful blog featuring tons of awesome and entertaining features will be releasing the last book of his Ranger Martin trilogy on October 20th, 2015. I had the privilege to get an advanced reader copy to give it a go and write up an honest review. Thanks so much to Jack for offering me the book! I appreciate it greatly!

If you haven’t seen my review for the first two books in his series, you can check them out here.  They are spoiler free so no worries about it ruining anything for you.

Now its time to look at the third book! Are you ready? I know I am!

Ranger Martin and the Search for Paradise
by: Jack Flacco 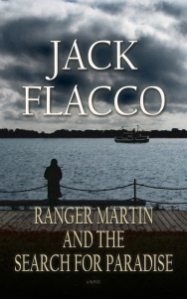 Coming back from the last mission exploring the alien invasion, Ranger Martin, Randy, Matty and Jon decide to head back to their now home in the silo except it is now taken over by three kids: Mark, Silver and Sunglow.  One little mistake and then a bad decision leads them to run away again, except this time right before Ranger Martin caught word that there’s a place safe from the undead.  A place where they can live away from all this.  The only deal is that they need to get there alive.  Will they be able to do it? Is Paradise really paradise?

This Ranger Martin series has been absolutely strong.  The first two books were page turners full of clever premises in the overused zombie apocalypse genre.  Yet, he is able to bring in some intriguing and fun characters.  Notably, an older man Ranger Martin who is very much full of character that takes care of a younger girl Matty and her little brother Jon and who has picked up a boy named Randy along the way.  In this one, early in the novel we encounter a new trio, Mark, Silver and Sunglow (two boys and a girl respectively).  They are a little less experienced and carry a similar dynamic to Ranger’s crew.  Everyone’s lost someone and we continue to experience loss but in this third book, we bring back some characters from the second book as well.  Its nice to have some connection because it gives it some link.

In this final installment to his Ranger Martin trilogy, we’re back to a zombie heavy novel.  I feel that this third one may be the strongest one of the three.  While the others are still very good, this one brings in a new aspect and focuses on the kids a little more, specifically the personal relationships going on between the teenagers here, Matty and Randy.  We get a little bit more of Ranger Martin’s back story in a little more depth and understand his actions and why he is the way he is and all the hatred aside from the obvious need to survive in this zombie apocalypse thats turned him into a ruthless zombie slayer.  They deal with their feelings and decisions.  While this could have turned lanky and heavy, somehow it managed to steer away from that territory even if there were slight moments of silly teenage drama that seemed to come up.

The action remains the key here.  Jack manages to make each of his action scenes a pleasure to read.  The visualization and description goes very well hand in hand and I can recreate the scene in my head.  There are a good amount of action which keeps the intense reading experience going despite the personal drama to help balance it out a little.  The group travels in this one and the concepts of hope and survival all come into play.  The final scenes concerning Paradise and the events leading up the final third of the book create the most memorable parts of the novel that kept me wanting to know what happens next.  What is even better is that while I did predict what would happen in the final scenes, it did escape my expectations a little and gave me a little surprise.  I always like to have that feeling.

Overall, Ranger Martin and the Search for Paradise was a pleasure to read from its frequent and vivid intense action scenes to the addition of better understanding the more deeper feelings of the characters we’ve learned to know over the last two books, Ranger Martin, Matty and Randy.  It all weaves together into a fun-filled reading experience but still manages to set a smart premise in a rather overused apocalyptic world .  It does hit some silly teenage drama despite the situation they are in but manages to steer away from it quickly.  Definitely one that I’d recommend especially if you’ve read the first two and enjoyed it.  If you haven’t, I’d suggest for you to get a hold of the first two and give this trilogy a go.  Its worth your time! 🙂