Its been a while since I saw Season 1 of Veronica Mars and posted about it HERE.  When I ended that post, I was at the middle of Season 2 and actually, I stopped there.  I can’t remember why but I did.  And somehow, as I was thinking its time for a new series with the bunch of movies I’ve been reviewing, I thought about Veronica Mars again and to continue it. 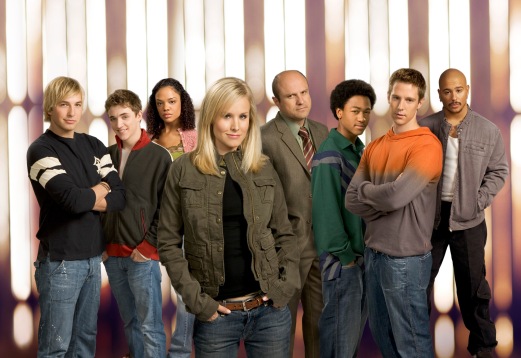 Veronica Mars picks up a little after the events of Season 1. Logan’s dad is put behind bars for his suspicion in being responsible for Lily’s murder. She’s now dating Duncan again and Logan has gone off the deep end again because she broke his heart. While right off, he gets accused for being responsible for the death of a PCHer called Felix on the bridge.  Shortly after, we see all this, the crazy doesn’t end until a school bus coming home from a trip plummets down a cliff after an explosion.  Linked to these few events, the season kicks off as Veronica Mars is hired and takes it on her own for other cases to figure out 1) who blew up the bus and sent it off a cliff 2) If Logan is innocent, who is responsible for Felix’s death and 3) How do they keep Logan’s dad Aaron behind bars? The story thickens and suspicions fly around.  Relationships form, new characters arrive and some old ones leave.

In my Season 1 post, I already talked about how much I love the characters of Veronica Mars, notably Veronica Mars herself and Logan Echolls.  And I also really liked Keith Mars.  Its a lot of fun.  This season, its even more and better.  Right off the bat, episode one sets all the right stages for the rest of the season to develop.  Not too many plots but enough to keep us intrigued for the 20+ episodes coming up.  There’s a lot of room for change and surprises and that is exactly what we get, along with some pretty close calls and danger heading in Veronica Mars’s world.

Veronica Mars continues with her snarky and witty lines and her love life comes a whole lot more in focus.  Is being back with Duncan all its set out for? I never really liked Duncan as a character.  He’s super sketchy and definitely has some issues. I felt that way in Season 1 and Season 2 definitely didn’t do anything to change it.  While, we have her ex, Logan Echolls who manages to create some tension and chemistry. There’s something about the dynamic of Veronica and Logan that is just so awesome.

But then, it could be because Logan is kind of that bad boy that you know has a good heart but he just makes these impulsive decisions.  Then when he knows he does something bad, he has those puppy dog eyes and then we just melt.  At least I do.  Its like that whole wanting to punch him in the face but also giving him hugs and tell him that it’ll all turn out good.  You have to admit that for a trust fund boy, he has gone through a good bit of damage.  Not that its an excuse for not being more able to treasure what he has instead of going around and ruining it all the time.

Moving along from Logan and Veronica (because it might start sounding like a creepy obsession), Season 2 does pull away from too much focus on them but expands it to other relationships with Wallace and his chasing the new girl in school and to their computer saavy friend, Mac.  It also puts the Casablancas brothers with a bigger role: two very different characters but adds a little extra to the events of Season 2.

I know that I’m skipping out a lot of the plot but that’s totally because if you haven’t seen it (which might be a very small amount of you), then I just don’t want to put spoilers.  But, I will say this, I like that we’re growing up with the characters.  Granted, I’m not in high school anymore so the whole transition to finding a college and moving forward with life is fun.  It makes this something more to expect because it will be another place to move forward.  That whole episode visiting the Herst College was awesome.  Other than that, the story was great.  They paced it with enough to make it throw a few suspicions in various directions and it stays really fun and thrilling to watch.

Veronica Mars Season 2 is very entertaining. It has a good formula working here with its nice characters.  There is a lot of gradual change that builds to solve the big case amidst all the other small cases.  Veronica remains remarkably quotable and the chemistry with her and Logan despite not exactly having a lot of together time is still great.  Their characters play off of each other really well.  Veronica Mars is just a great character.  I can’t wait to watch the last season.  It should be soon 😉

Are you a fan of Veronica Mars series?