Black Fawn Films has been on fire with tons of horror.  The year before last, it was Antisocial.  Last year, it was responsible for The Drownsman.  This year, other than Antisocial 2 (which I will review next), its Bite.  The love and passion for horror is fully apparent in the producers and directors at Black Fawn Films.  The Drownsman aimed to bring in a new memorable figure just like how Jason and Michael Myers was supposed to do and for Bite, it is at the level of David Cronenberg’s The Fly (which I haven’t seen).  Regardless, I chose this film because despite having a little issue with The Drownsman, there is no doubt that director Chad Archibald is really great at doing horror and for all that passion I see during last year’s Q&A, I would go see whatever other projects him and his company will release.  So there I was, lining up super early, because I had nothing else to do, at the world premiere of Bite.

Right before the movie, we get a little gift handed out to us and I tweeted about it. 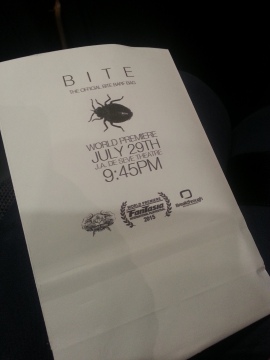 That was a thing and it made me a little worried about what to expect.  I usually can stomach pretty gruesome things but really? A barf bag? At least it got me mentally prepared 😉 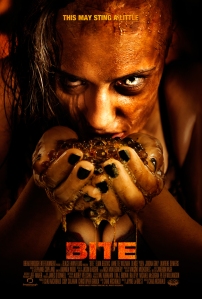 Casey (Elma Begovic) going away with her two girl friends Kirsten (Denise Yuen) and Jill (Annette Wozniak) to Costa Rica for her bachelorette party.  While exploring there, she gets bitten by something in the water.  When she gets home, what seemed like a small bite starts to get infected and worsen.  Soon, she starts feeling a change.  These changes intensifies as her fear for getting married with her fiance Jared (Jordan Gray) shadow over her.

I’m sure that whole disgusting thing is looming in the background of your heads after the whole barf bag gift so I’m going to start with that.  While I don’t know if it was related to the movie or just the massive heat wave we had last week, I do know that one girl seemed like she wasn’t doing well as she exited the theatre after the first scene or two that was pretty stomach-turning.  At the end of the show, they were saying that 3 people left and paramedics had to come.  I sure hope they are doing alright but yes, while I didn’t need to use my barf bag, there were a few scenes that it was so revolting that I resulted to taking off my glasses for one or two scenes and turned away for a few seconds in the earlier ones.  If that was their goal, applause to them, hell, even standing ovation to a phenomenal job! 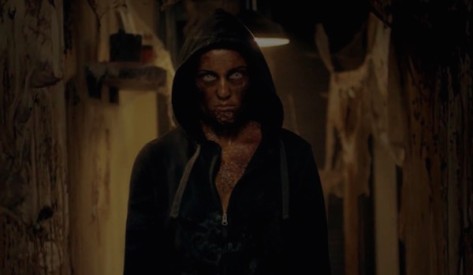 Consider that part more of a warning of what to expect than my criticizing it because Bite was a very good horror movie.  It starts off in a pretty mellow way to set up the situation of how Casey and her feelings towards her upcoming wedding and her dynamics with her friends and their personality.  It gives us hints of what will happen.  Being away only took a little bit of time but being back in her place, it doesn’t have a lot of places that it moves around from.  Casey and her apartment building is where mostly everything happens and that location has a really nice atmosphere to it (even though the exterior of that building makes me question its believability as a residential building).  The atmosphere is what I love the most about Chad Archibald’s work, even in The Drownsman last year.  This one has a rather sombre texture to every scene, especially when Casey starts her transformation.  That whole set of her apartment is a work of art in the third act in all its super nauseating and creepy way.

I guess the only thing I can rag on about Bite is the dialogue.  Its not exactly engaging and it can be too much.  The opening sequence was a little bit of burden and I got a little worried we had entered into the found footage film which only applied to that first little bit in the exotic getaway part where they were setting up the stage.

While, the best parts is in some very good performances from the cast.  The very successfully mean future mother in law was done in the most convincingly nasty way that you will hate everything about her.  Casey was portrayed very well by Elma Begovic.  The whole physical transformation and the things she does, her reactions are really awesome.  She was able to embrace the character from emotional fear to the physical changes. As for the other characters, the best friends have this balance of good and bad while the fiance, and I honestly believe his character was meant to be like this, a little frustrating and kind of a jerk. But that is the character and everyone fit well in their spots so I’m happy with it. 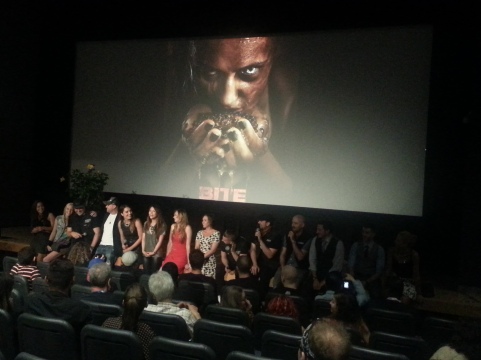 Overall, Bite is a very good horror film. The cast was great at letting us know the characters in this story especially Elma Begovic as the main character Casey. While the first act isn’t quite as solid, it picks itself up in the second act and excels in the third act.  The atmosphere and particularly the set is done very well.  One of the most outstanding features is in the incredible set transformation and also Casey’s transformation from the after effects of the bite.  Its a slimy, gooey and very disgusting movie but if you can stomach it, you definitely should give this a go! 🙂