My first ever horror anthology everyone! And I get to start it with a world premiere of Tales of Halloween directed by some awesome directors who happen to be hosting the event also.  Included in this group is definitely one of my favorite directors, Neil Marshall, the guy who directed The Descent which is one of my favorite horror movies.  Before the movie started, a few of directors hadn’t seen the final cut because its has only been completed a few days according to them.  To them, this is a project among good friends who would want to direct a movie together and that resulted in 11 directors for 10 stories in this horror anthology. For this one, I was that crazy person scribbling on my notebook in the dark without looking at the paper while the movie was playing and my eyes were glued to the screen. The hype in the theatre was incredible.  Tales of Halloween might be one of the best theatre experiences I’ve had! It defines why I always love going to Fantasia even if it means lining up 80 minutes in advance outside. 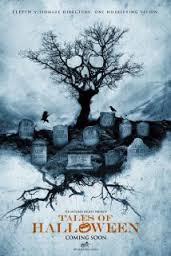 I’m going to try to keep this short.  Each segment was maybe about 10-12 minute pieces or so and it was in that order up there, title with the respective director for that piece.  Tales of Halloween is set in a small American town where these 10 stories take place in different areas and at various timelines where you’ll see characters crossing in each other’s stories.   It features all things Halloween from ghosts, witches, killers, monsters and a whole lot more that you should go and discover.

I wasn’t so sure that I’d be into horror anthology and to be honest, the first trailer released for Tales of Halloween really didn’t quite get me so eager to see it.  What sold me was the Comic-con trailer that was a lot more detailed and well, Neil Marshall being there.  The Q&A for this one was really great, just to hear their experiences and working together and how to put it together.  There is one thing that you can’t doubt: the passion and heart put into Tales in Halloween.  There is a ton of it!

Going into an anthology for the first time, I had the expectation that it would be hard to follow and wondering whether there would be correlation between the stories.  As it happens, there was a lot of little details from the directors appearing in each other’s stories to characters crossing through stories as it all takes place in various time lines through this town.  The second expectation is that I’d probably end up liking one more than the other for reasons of different style or whatnot.  In a way, that was true. I didn’t like all the stories equally but they were all entertaining and I didn’t hate any of them but they all definitely had different styles.

Tales of Halloween sets the tone right at the beginning like its taking us into a town on the day/evening/night of Halloween.  The opening sequence was done so well.  It was kind of cartoony and had this really nice score in the background as we had the narrator take us into the town and we got snapshots of each story and their directors.  At least that’s what I remembered it was.  I just loved it a lot and it pulled me right into being the excitement of watching this.  Right off the bat, we step into the first story, Sweet Tooth and it takes us right into the mood as we have teenagers scaring a little kid about legends of this character called Sweet Tooth revolving candy and trick or treat and Halloween traditions.  Honestly, there is no better way to take everyone into Halloween than that.  As the other stories unfold, we have neighbors fighting for who decorates their lawn better, flipping the perspective around to trick or treat, slight turns of faint, facing demons and bullies and haunting ghost stories.  It all comes into the mix with all the symbols we’d associate with Halloween played into this mix and then ending it with something a big finale of action and craziness.

A lot of thought was put into organizing the Tales of Halloween so that they would flow well together and build the Halloween mood.  What’s nice is its not just scares, there’s quite a bit of sarcasm and comedy in it all and it really lifts the movie.  There was some stories that didn’t quite have me into it all the time but there was also the whole idea of knowing how good a director is when it knows when to play the audiences expectations, be it a jump scare or a turn of events.

I really don’t want to dive into this too much.  Overall, Tales of Halloween is an impressive horror anthology with a fantastic opening sequence, catchy score and a nice mix of horror subgenres while giving it a thoughtful flow of events.  Nothing makes a movie better than feeling the talent mixed with heart and passion put into a project.  Tales of Halloween is an entertaining set of stories and if you get a chance, you really need to check this out for yourself! 🙂

Have you heard of Tales of Halloween? What do you think of it: directors, cast, premise, trailer? Do you like horror anthologies? Any recommendations?