I love monthly book recaps.  Its been working so well until the last few months where I was focusing on the independent writers and then those deserve their own posts to share all the talent in our little blogosphere alone.

BUT, the Lorien Legacies deserve its own post.  Most book series (even movies) kind of taper off and lose the original greatness to it as the books and the story build up.  Lorien Legacies is fantastic at keeping the pace, developing the characters and I just keeping this whole Loric business in check the whole time. Even after Michael Bay took up the project and turned into a hopeless effort with his signature stamped over it, this series has such a great potential for the big screen, if not, a TV series based on this would pretty much kick-ass.

Wait I’m getting ahead of myself…

THE FALL OF FIVE (LORIEN LEGACIES#4) 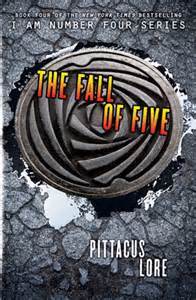 I didn’t review I Am Number Four (Lorien Legacy#1) on here but if you do happen want to check out #2 The Power of Six and #3 The Rise of Nine, you could find them HERE and HERE respectively.

Much like the rest of the series, The Fall of Five is a really fun read.  Its action-packed and with so many books, this one is where the Gardes are finally all reunited, after finally finding Five.  The Mogadorian fights are more and the creatures are bigger and badder.  There are a few additions back into the story.  This time around its narrated by John (Four), Marina (Niine) and Sam, one of the earlier characters.

The beginning of The Fall of Five took me a little while to catch again since the last time I read this series was back in January.  Its not a lack of desire to read it that I’ve waited this long but rather, I have to sit patiently and wait for paperback versions to come out.  I lug these books to and from work along with a bunch of other stuff so for the sake of my shoulders and my back, I try to choose the lighter option, that being paperback but those apparently now take forever to come out.  And with exciting books, I very much prefer having it in my  hand than on my tablet.  I’m going off topic again.

The Fall of Five is so much fun to read.  At the same time, it goes a little more personal.  Why? As much as its about saving Lorien and eventually being able to go back once they get everyone together, everyone has their own story.  There’s a few unexpected twists that really bring everything to perspective.  Thats the key to what makes these books fantastic reads.  Sure, they are for teens but I don’t really care because it does a whole lot better in pacing than a lot of more adult books that I read.

That last few chapters was like heart attack intensity. I think I held my breath through it all.  Exciting stuff, my friends.

I highly recommend it and thats why I’m avoiding revealing too much of the plot itself. Its worth your time.  Trust me! 🙂

One thought on “Book Review: The Fall of Five (Lorien Legacies #4) by Pittacus Lore”