November will be full of these double features.  Maybe it’ll be on a weekly basis.  I usually watch movies on the weekends now between writing for NaNoWriMo.  Its been pretty good until the weekend hit and I wrote a grand total of less than 500 words in 3 days.  I’ve been working on catching up. Further update on that is on some form of weekly adventures revival, which I’ve been struggling to put together.

Exam and Mr. Jones (along with Secret Window and Premonition that I didn’t watch entirely) are the next two movies.  Lets check them out! 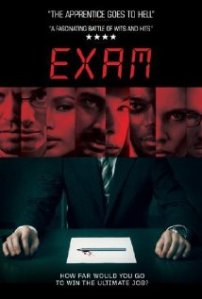 Eight candidates are chosen for the final exam to get a position in a big corporation.  They are all locked in a room with a specified amount of time to answer the exam except the exam isn’t a conventional one.  There is one question and one answer requested except what is the question. As the countdown start, tension builds.  Who will come out on top and get the job in the end?

Exam is a pretty effective thriller.  The setting itself is claustrophobic and nerve-wracking. As the story escalates and the group each dive deeper into the situation thrown at them, its all about human behavior.  At the same time, it exposes a new world that these people are actually living in.  Its obvious that they are not living in the present world but rather one that has gone close to apocalyptic.  Maybe thats just me overanalyzing.

I don’t like to go too in-depth with thrillers but this was a decent one.  I kind of figured it out partially at the end because I think in the way the story gave away a few hints as to where it was going to end.  Still, there was a good bit of decent plot twists combined with the atmosphere and tension that made this a very intriguing watch. Definitely one I’d recommend.  The script does get ahead of itself a little but it sets up a good bit of suspense also. And the final reveal? Quite awesome!

Scott (Jon Foster) and Penny (Sarah Jones) are a young couple that move into the middle of nowhere so that Scott can make a nature documentary.  However, when he gets there, they realize that the infamous but mysterious artist, Mr. Jones is their closest neighbour.  Mr. Jones makes sculptures that he drags out at night to set in the woods and he doesn’t interact with anyone.  Intrigued by this person, Scott and Penny investigate further only to find that there is possibly more than they imagined when their nightmares and reality get tangled up.

I’m not even sure if thats a good way to put this.  I had to watch Mr. Jones two times to really understand it more.  Well, the first time I flat out fell asleep.  What is Mr. Jones? Its a victim of multiple genre.  It comes off as a found footage, filmed with a double-sided that Scott put together at the beginning filming both their reactions and what’s in front of him.  Then it turns into a documentary with a lot of interviews in the middle as we get to know a little more about how others have been affected by Mr. Jones and his sculptures.  At the final part, its more of a thriller.  Now, with mixed genres, there’s always a question as to whether it works.

My answer: Kind of… 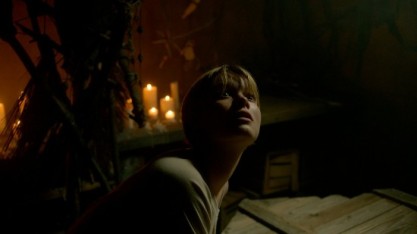 That found footage bit takes a little time to get used to it.  When it first going through the running and flipping back and forth from the wobbling scene to the close-up of the face. I’ve never watched a movie and felt nauseous, and I did. I wasn’t even eating anything at the time. It took a while to get used to.  I do have to admit that once I did understood what was going, the suspense of what was in fact reality and nightmare was fun to watch.  The acting is actually quite good even if the script they had was a little nonsensical.

These sort of things can be hard to get into because it defies what I’d ever do.  For one, get lost in the middle of nowhere to live in a remote cabin sounds great in my mind but I’d never do it.  Two, if I were to walk past an artist that wears a scary looking mask, I would leave.  Like I mean, if it meant walking 10 miles to the road, I’d take my backpack in full daylight and just leave.  Nothing good can come of that. Maybe thats me not being adventurous but anyways, I’m already saying too much, if you do want to give this a shot.

Its not a great movie, in fact, my boyfriend thought it was a monumental waste of time. I felt a little differently.  It had its tense moments mostly because of the atmosphere they are in.  Its built pretty well and the acting was convincing enough.  I just hate it when I see these movies where they go between dreams and reality and have so much potential but I feel like it could’ve been done better. Maybe editing too much out? I don’t know.

Does that sound negative? Please don’t take it that way because honestly, I liked it.  It just could’ve been better.

Have you seen Exam or Mr. Jones? What are your thoughts on it?