While I’m slowly getting things back on regular programming here, especially taking longer than expected on how to write up the review for The Shining, I had to share my foodie side.

This goes to thank one of my dear friends and fellow blogger, Starry Traveler and her husband in inviting my boyfriend and I to join in their MTL a Table dinners.  They have the full week booked to try all sorts of restaurants in Montreal.  While I wanted to try a few different ones, I chose three from their list.

First of all, lets talk a little about MTL a Table.  This event is a week long event where a list of restaurants around the city set a menu with various options and price it at either $19, $29 or $39 (depending on the quality, I presume).  Although its limited in choice, it does reflect a fairly cheaper price for the multiple course meal provided.  Usually includes appetizer, main course and dessert.

The first one that we went to was the past Sunday at Le Montrealais in the Queen Elizabeth Hotel.

The night started a little hectic when the entrances of Queen Elizabeth was barred off by the police because of strike (for unknown reason) was going on outside, although it was dispersing as we arrived through the underground passage. After meeting Starry Traveller and getting our seats, we ordered our meal.

My boyfriend ended up not wanting anything from the MTL a Table menu and took something from the normal menu. You’ll see what it is after. All the choices are present as each course had two choices and Starry Traveller and her husband both took different choices to be able to try everything.

This was my choice for appetizer and I usually don’t eat terrine or foie gras but this was delicious dish.  It was a bit salty for the foie gras pork cheek terrine part but the little salsa thing on the side balanced it really well because it was super awesome.  Although I haven’t quite figured out what it is yet.  We believe its glazed turnips or something like that.

Smoked Meat Sandwich (not part of MTL a Table) 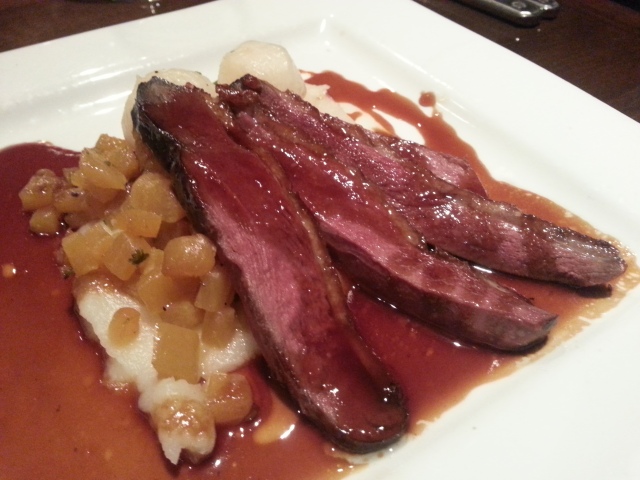 Talk about eating everything that I don’t usually eat.  Main course that I chose was duck.  Let me tell you this: This was amazing! Like the duck melted in my mouth. Maybe not melted since it was a little chewy but the sauce was so delicious. Did I ever tell you that I love turnips? Because I do and these glazed ones were pretty awesome as well.

For the final course (and my favorite part) is dessert.  This is where I get to be picky.  The appearance was beautiful.  I couldn’t eat the bottom portion because the lemon cream thing is cream and has milk and that touched the macaron part so my boyfriend took a tasting of it.  The raspberry sorbet and raspberries were delicious.  Now, the only issue was the the bottom part, according to my boyfriend was extremely sweet and he usually doesn’t complain about anything being too sweet or salty.  So thats saying something.  I’m kind of happy that I didn’t eat it then because then I might have more to complain about.

Le Montrealais is a beautiful restaurant.  The environment and atmosphere was calm and relaxing to be in.  The decor was upscale.  The service was good because everyone was really friendly.  Its a nice place to eat for sure. For the most part, the food was delicious.  I loved the appetizer and the main course a lot.  Its unfortunate that I couldn’t try in entirety either of the desserts but I do wonder if other choices are as sweet as the one we had.

Overall, it was a really enjoyable meal and I’d say that Le Montrealais does deserve a visit 🙂 If you were wondering how much it cost: MTL a Table price of $29 per meal.

2 more restaurants on this gastronomic tour. I’ll be back sharing more hopefully deliciousness 😉