Eating out a lot on vacation is normal, even if we have a place to stay. In Hong Kong, when you have a big group, its generally better to just go out because the space is so tight in the living quarters.

After the outing at Citygate Outlets, me, my mom and her friends ended up spending the entire day running around town.

At the end of the day, we stopped at Sham Shui Po to check out some technology products and to compare prices.

When my mom’s best friend joined us afterwards for a short while, she took us to a rather popular restaurant located in that area right by the subway exit of Sham Shui Po.  This lovely restaurant is called Sharp Star.

Sharp Star is hidden in an alley behind stalls located in front of it but welcoming you in the entrance are snippets of newspapers (if I remember correctly) and pictures of popular Hong Kong stars that went there to dine.

We went at a fairly early dinner time so the place was empty.  As we sat down, the waiter was funny and very nice as he helped us make our choices for the meal.  The service was pretty impressive.

First up, we had the chef’s invention on Fried Spare Ribs with the taste of plum and this other Chinese ingredient that I don’t know how to translate.

Next up, we have this Soy Sauce Chicken but its with this soy sauce which is supposed to be like the first batch making it more premium or high quality or something like that.

I love chicken and one of my fave ways is eating it after its been simmered in soy sauce.  This one was mega delicious 🙂 The chicken was so tender and even the soy sauce wasn’t all that salty.  I wonder what else they put in there 😉

Following that, my mom’s friend had gone out to pick out a lovely fresh fish.  We took the simple option and decided to have steamed fish.

Don’t ask me what type of fish because I seriously cannot remember anymore.  I really should jot down notes while I travel at restaurants.

I can’t remember if there was another dish, maybe plain veggies.  I just can’t because I don’t have a picture of it but its rare we eat out without any veggies included.

Moving on, our last one was a little bonus from the waiter with a little fried dessert. 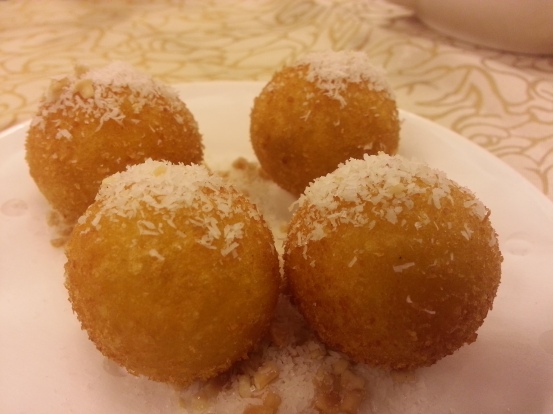 I believe they had some taro paste inside but I don’t quite know and didn’t ask because the restaurant was getting busy. It was pretty good also.

I totally recommend Sharp Star Restaurant. It has some creative and delicious meals. The service is fantastic and…its just awesome!

I had really wanted to go again before I left but I never got the chance….

Is there a restaurant that you ate at while travelling that gave you an unforgettable dining experience?